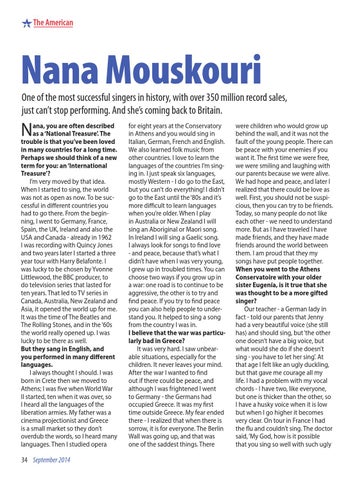 One of the most successful singers in history, with over 350 million record sales, just can’t stop performing. And she’s coming back to Britain.

ana, you are often described as a ‘National Treasure’. The trouble is that you’ve been loved in many countries for a long time. Perhaps we should think of a new term for you: an ‘International Treasure’? I’m very moved by that idea. When I started to sing, the world was not as open as now. To be successful in different countries you had to go there. From the beginning, I went to Germany, France, Spain, the UK, Ireland and also the USA and Canada - already in 1962 I was recording with Quincy Jones and two years later I started a three year tour with Harry Belafonte. I was lucky to be chosen by Yvonne Littlewood, the BBC producer, to do television series that lasted for ten years. That led to TV series in Canada, Australia, New Zealand and Asia, it opened the world up for me. It was the time of The Beatles and The Rolling Stones, and in the ‘60s the world really opened up. I was lucky to be there as well. But they sang in English, and you performed in many different languages. I always thought I should. I was born in Crete then we moved to Athens; I was five when World War II started, ten when it was over, so I heard all the languages of the liberation armies. My father was a cinema projectionist and Greece is a small market so they don’t overdub the words, so I heard many languages. Then I studied opera

for eight years at the Conservatory in Athens and you would sing in Italian, German, French and English. We also learned folk music from other countries. I love to learn the languages of the countries I’m singing in. I just speak six languages, mostly Western - I do go to the East, but you can’t do everything! I didn’t go to the East until the ‘80s and it’s more difficult to learn languages when you’re older. When I play in Australia or New Zealand I will sing an Aboriginal or Maori song. In Ireland I will sing a Gaelic song. I always look for songs to find love - and peace, because that’s what I didn’t have when I was very young, I grew up in troubled times. You can choose two ways if you grow up in a war: one road is to continue to be aggressive, the other is to try and find peace. If you try to find peace you can also help people to understand you. It helped to sing a song from the country I was in. I believe that the war was particularly bad in Greece? It was very hard. I saw unbearable situations, especially for the children. It never leaves your mind. After the war I wanted to find out if there could be peace, and although I was frightened I went to Germany - the Germans had occupied Greece. It was my first time outside Greece. My fear ended there - I realized that when there is sorrow, it is for everyone. The Berlin Wall was going up, and that was one of the saddest things. There

were children who would grow up behind the wall, and it was not the fault of the young people. There can be peace with your enemies if you want it. The first time we were free, we were smiling and laughing with our parents because we were alive. We had hope and peace, and later I realized that there could be love as well. First, you should not be suspicious, then you can try to be friends. Today, so many people do not like each other - we need to understand more. But as I have traveled I have made friends, and they have made friends around the world between them. I am proud that they my songs have put people together. When you went to the Athens Conservatoire with your older sister Eugenía, is it true that she was thought to be a more gifted singer? Our teacher - a German lady in fact - told our parents that Jenny had a very beautiful voice (she still has) and should sing, but ‘the other one doesn’t have a big voice, but what would she do if she doesn’t sing - you have to let her sing’. At that age I felt like an ugly duckling, but that gave me courage all my life. I had a problem with my vocal chords - I have two, like everyone, but one is thicker than the other, so I have a husky voice when it is low but when I go higher it becomes very clear. On tour in France I had the flu and couldn’t sing. The doctor said, ‘My God, how is it possible that you sing so well with such ugly