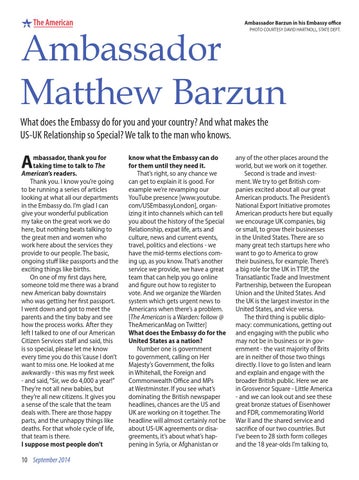 Ambassador Barzun in his Embassy office

What does the Embassy do for you and your country? And what makes the US-UK Relationship so Special? We talk to the man who knows.

mbassador, thank you for taking time to talk to The American’s readers. Thank you. I know you’re going to be running a series of articles looking at what all our departments in the Embassy do. I’m glad I can give your wonderful publication my take on the great work we do here, but nothing beats talking to the great men and women who work here about the services they provide to our people. The basic, ongoing stuff like passports and the exciting things like births. On one of my first days here, someone told me there was a brand new American baby downstairs who was getting her first passport. I went down and got to meet the parents and the tiny baby and see how the process works. After they left I talked to one of our American Citizen Services staff and said, this is so special, please let me know every time you do this ‘cause I don’t want to miss one. He looked at me awkwardly - this was my first week - and said, “Sir, we do 4,000 a year!” They’re not all new babies, but they’re all new citizens. It gives you a sense of the scale that the team deals with. There are those happy parts, and the unhappy things like deaths. For that whole cycle of life, that team is there. I suppose most people don’t

know what the Embassy can do for them until they need it. That’s right, so any chance we can get to explain it is good. For example we’re revamping our YouTube presence [www.youtube. com/USEmbassyLondon], organizing it into channels which can tell you about the history of the Special Relationship, expat life, arts and culture, news and current events, travel, politics and elections - we have the mid-terms elections coming up, as you know. That’s another service we provide, we have a great team that can help you go online and figure out how to register to vote. And we organize the Warden system which gets urgent news to Americans when there’s a problem. [The American is a Warden: follow @ TheAmericanMag on Twitter] What does the Embassy do for the United States as a nation? Number one is government to government, calling on Her Majesty’s Government, the folks in Whitehall, the Foreign and Commonwealth Office and MPs at Westminster. If you see what’s dominating the British newspaper headlines, chances are the US and UK are working on it together. The headline will almost certainly not be about US-UK agreements or disagreements, it’s about what’s happening in Syria, or Afghanistan or

any of the other places around the world, but we work on it together. Second is trade and investment. We try to get British companies excited about all our great American products. The President’s National Export Initiative promotes American products here but equally we encourage UK companies, big or small, to grow their businesses in the United States. There are so many great tech startups here who want to go to America to grow their business, for example. There’s a big role for the UK in TTIP, the Transatlantic Trade and Investment Partnership, between the European Union and the United States. And the UK is the largest investor in the United States, and vice versa. The third thing is public diplomacy: communications, getting out and engaging with the public who may not be in business or in government - the vast majority of Brits are in neither of those two things directly. I love to go listen and learn and explain and engage with the broader British public. Here we are in Grosvenor Square - Little America - and we can look out and see these great bronze statues of Eisenhower and FDR, commemorating World War II and the shared service and sacrifice of our two countries. But I’ve been to 28 sixth form colleges and the 18 year-olds I’m talking to,