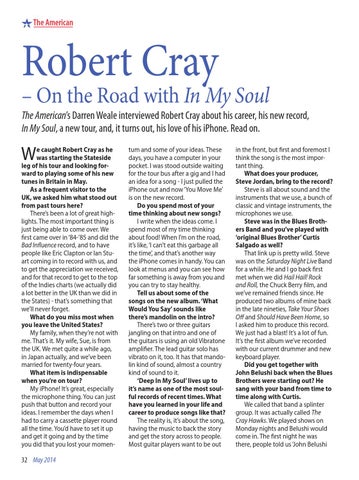 – On the Road with In My Soul

The American’s Darren Weale interviewed Robert Cray about his career, his new record, In My Soul, a new tour, and, it turns out, his love of his iPhone. Read on.

e caught Robert Cray as he was starting the Stateside leg of his tour and looking forward to playing some of his new tunes in Britain in May. As a frequent visitor to the UK, we asked him what stood out from past tours here? There’s been a lot of great highlights. The most important thing is just being able to come over. We first came over in ‘84-’85 and did the Bad Influence record, and to have people like Eric Clapton or Ian Stuart coming in to record with us, and to get the appreciation we received, and for that record to get to the top of the Indies charts (we actually did a lot better in the UK than we did in the States) - that’s something that we’ll never forget. What do you miss most when you leave the United States? My family, when they’re not with me. That’s it. My wife, Sue, is from the UK. We met quite a while ago, in Japan actually, and we’ve been married for twenty-four years. What item is indispensable when you’re on tour? My iPhone! It’s great, especially the microphone thing. You can just push that button and record your ideas. I remember the days when I had to carry a cassette player round all the time. You’d have to set it up and get it going and by the time you did that you lost your momen-

tum and some of your ideas. These days, you have a computer in your pocket. I was stood outside waiting for the tour bus after a gig and I had an idea for a song - I just pulled the iPhone out and now ‘You Move Me’ is on the new record. Do you spend most of your time thinking about new songs? I write when the ideas come. I spend most of my time thinking about food! When I’m on the road, it’s like, ‘I can’t eat this garbage all the time’, and that’s another way the iPhone comes in handy. You can look at menus and you can see how far something is away from you and you can try to stay healthy. Tell us about some of the songs on the new album. ‘What Would You Say’ sounds like there’s mandolin on the intro? There’s two or three guitars jangling on that intro and one of the guitars is using an old Vibratone amplifier. The lead guitar solo has vibrato on it, too. It has that mandolin kind of sound, almost a country kind of sound to it. ‘Deep In My Soul’ lives up to it’s name as one of the most soulful records of recent times. What have you learned in your life and career to produce songs like that? The reality is, it’s about the song, having the music to back the story and get the story across to people. Most guitar players want to be out

in the front, but first and foremost I think the song is the most important thing. What does your producer, Steve Jordan, bring to the record? Steve is all about sound and the instruments that we use, a bunch of classic and vintage instruments, the microphones we use. Steve was in the Blues Brothers Band and you’ve played with ‘original Blues Brother’ Curtis Salgado as well? That link up is pretty wild. Steve was on the Saturday Night Live Band for a while. He and I go back first met when we did Hail Hail! Rock and Roll, the Chuck Berry film, and we’ve remained friends since. He produced two albums of mine back in the late nineties, Take Your Shoes Off and Should Have Been Home, so I asked him to produce this record. We just had a blast! It’s a lot of fun. It’s the first album we’ve recorded with our current drummer and new keyboard player. Did you get together with John Belushi back when the Blues Brothers were starting out? He sang with your band from time to time along with Curtis. We called that band a splinter group. It was actually called The Cray Hawks. We played shows on Monday nights and Belushi would come in. The first night he was there, people told us ‘John Belushi