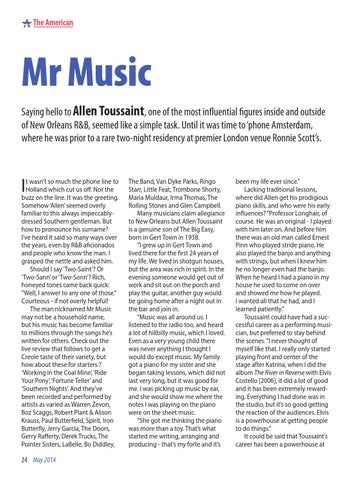 Mr Music Saying hello to Allen Toussaint, one of the most influential figures inside and outside of New Orleans R&B, seemed like a simple task. Until it was time to ‘phone Amsterdam, where he was prior to a rare two-night residency at premier London venue Ronnie Scott’s.

t wasn’t so much the phone line to Holland which cut us off. Nor the buzz on the line. It was the greeting. Somehow ‘Allen’ seemed overly familiar to this always impeccablydressed Southern gentleman. But how to pronounce his surname? I’ve heard it said so many ways over the years, even by R&B aficionados and people who know the man. I grasped the nettle and asked him. Should I say ‘Two-Saint’? Or ‘Two-Sann’ or ‘Two-Sonn’? Rich, honeyed tones came back quick: “Well, I answer to any one of those.” Courteous - if not overly helpful! The man nicknamed Mr Music may not be a household name, but his music has become familiar to millions through the songs he’s written for others. Check out the live review that follows to get a Creole taste of their variety, but how about these for starters:? ‘Working in the Coal Mine’, ‘Ride Your Pony’, ‘Fortune Teller’ and ‘Southern Nights’. And they’ve been recorded and performed by artists as varied as Warren Zevon, Boz Scaggs, Robert Plant & Alison Krauss, Paul Butterfield, Spirit, Iron Butterfly, Jerry Garcia, The Doors, Gerry Rafferty, Derek Trucks, The Pointer Sisters, LaBelle, Bo Diddley,

The Band, Van Dyke Parks, Ringo Starr, Little Feat, Trombone Shorty, Maria Muldaur, Irma Thomas, The Rolling Stones and Glen Campbell. Many musicians claim allegiance to New Orleans but Allen Toussaint is a genuine son of The Big Easy, born in Gert Town in 1938. “I grew up in Gert Town and lived there for the first 24 years of my life. We lived in shotgun houses, but the area was rich in spirit. In the evening someone would get out of work and sit out on the porch and play the guitar, another guy would be going home after a night out in the bar and join in. “Music was all around us. I listened to the radio too, and heard a lot of hillbilly music, which I loved. Even as a very young child there was never anything I thought I would do except music. My family got a piano for my sister and she began taking lessons, which did not last very long, but it was good for me. I was picking up music by ear, and she would show me where the notes I was playing on the piano were on the sheet music. “She got me thinking the piano was more than a toy. That’s what started me writing, arranging and producing - that’s my forte and it’s

been my life ever since.” Lacking traditional lessons, where did Allen get his prodigious piano skills, and who were his early influences? “Professor Longhair, of course. He was an original - I played with him later on. And before him there was an old man called Ernest Pinn who played stride piano. He also played the banjo and anything with strings, but when I knew him he no longer even had the banjo. When he heard I had a piano in my house he used to come on over and showed me how he played. I wanted all that he had, and I learned patiently.” Toussaint could have had a successful career as a performing musician, but preferred to stay behind the scenes. “I never thought of myself like that. I really only started playing front and center of the stage after Katrina, when I did the album The River in Reverse with Elvis Costello [2006], it did a lot of good and it has been extremely rewarding. Everything I had done was in the studio, but it’s so good getting the reaction of the audiences. Elvis is a powerhouse at getting people to do things.” It could be said that Toussaint’s career has been a powerhouse at