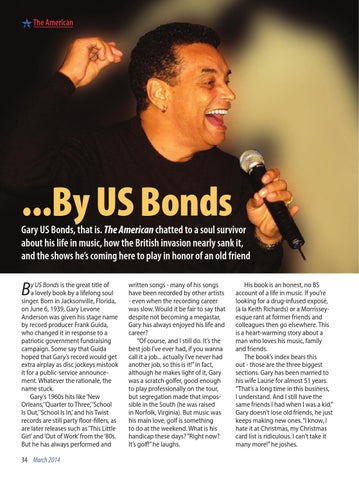 Gary US Bonds, that is. The American chatted to a soul survivor about his life in music, how the British invasion nearly sank it, and the shows he’s coming here to play in honor of an old friend

y US Bonds is the great title of a lovely book by a lifelong soul singer. Born in Jacksonville, Florida, on June 6, 1939, Gary Levone Anderson was given his stage name by record producer Frank Guida, who changed it in response to a patriotic government fundraising campaign. Some say that Guida hoped that Gary’s record would get extra airplay as disc jockeys mistook it for a public-service announcement. Whatever the rationale, the name stuck. Gary’s 1960s hits like ‘New Orleans,’ ‘Quarter to Three,’ ‘School Is Out,’ ‘School Is In,’ and his Twist records are still party floor-fillers, as are later releases such as ‘This Little Girl’ and ‘Out of Work’ from the ‘80s. But he has always performed and

written songs - many of his songs have been recorded by other artists - even when the recording career was slow. Would it be fair to say that despite not becoming a megastar, Gary has always enjoyed his life and career? “Of course, and I still do. It’s the best job I’ve ever had, if you wanna call it a job... actually I’ve never had another job, so this is it!” In fact, although he makes light of it, Gary was a scratch golfer, good enough to play professionally on the tour, but segregation made that impossible in the South (he was raised in Norfolk, Virginia). But music was his main love, golf is something to do at the weekend. What is his handicap these days? “Right now? It’s golf!” he laughs.

His book is an honest, no BS account of a life in music. If you’re looking for a drug-infused exposé, (à la Keith Richards) or a Morrisseyesque rant at former friends and colleagues then go elsewhere. This is a heart-warming story about a man who loves his music, family and friends. The book’s index bears this out - those are the three biggest sections. Gary has been married to his wife Laurie for almost 51 years. “That’s a long time in this business, I understand. And I still have the same friends I had when I was a kid.” Gary doesn’t lose old friends, he just keeps making new ones. “I know, I hate it at Christmas, my Christmas card list is ridiculous. I can’t take it many more!” he joshes.