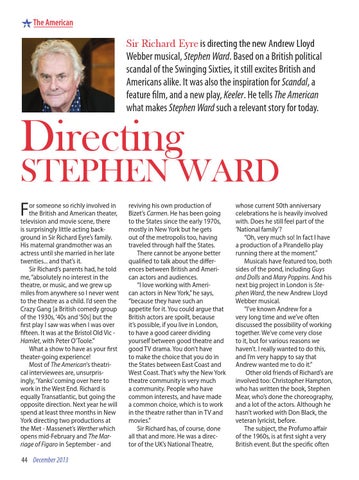 Sir Richard Eyre is directing the new Andrew Lloyd Webber musical, Stephen Ward. Based on a British political scandal of the Swinging Sixties, it still excites British and Americans alike. It was also the inspiration for Scandal, a feature film, and a new play, Keeler. He tells The American what makes Stephen Ward such a relevant story for today.

or someone so richly involved in the British and American theater, television and movie scene, there is surprisingly little acting background in Sir Richard Eyre’s family. His maternal grandmother was an actress until she married in her late twenties... and that’s it. Sir Richard’s parents had, he told me, “absolutely no interest in the theatre, or music, and we grew up miles from anywhere so I never went to the theatre as a child. I’d seen the Crazy Gang [a British comedy group of the 1930s, ‘40s and ‘50s] but the first play I saw was when I was over fifteen. It was at the Bristol Old Vic Hamlet, with Peter O’Toole.” What a show to have as your first theater-going experience! Most of The American‘s theatrical interviewees are, unsurprisingly, ‘Yanks’ coming over here to work in the West End. Richard is equally Transatlantic, but going the opposite direction. Next year he will spend at least three months in New York directing two productions at the Met - Massenet’s Werther which opens mid-February and The Marriage of Figaro in September - and

reviving his own production of Bizet’s Carmen. He has been going to the States since the early 1970s, mostly in New York but he gets out of the metropolis too, having traveled through half the States. There cannot be anyone better qualified to talk about the differences between British and American actors and audiences. “I love working with American actors in New York,” he says, “because they have such an appetite for it. You could argue that British actors are spoilt, because it’s possible, if you live in London, to have a good career dividing yourself between good theatre and good TV drama. You don’t have to make the choice that you do in the States between East Coast and West Coast. That’s why the New York theatre community is very much a community. People who have common interests, and have made a common choice, which is to work in the theatre rather than in TV and movies.” Sir Richard has, of course, done all that and more. He was a director of the UK’s National Theatre,

whose current 50th anniversary celebrations he is heavily involved with. Does he still feel part of the ‘National family’? “Oh, very much so! In fact I have a production of a Pirandello play running there at the moment.” Musicals have featured too, both sides of the pond, including Guys and Dolls and Mary Poppins. And his next big project in London is Stephen Ward, the new Andrew Lloyd Webber musical. “I’ve known Andrew for a very long time and we’ve often discussed the possibility of working together. We’ve come very close to it, but for various reasons we haven’t. I really wanted to do this, and I’m very happy to say that Andrew wanted me to do it.” Other old friends of Richard’s are involved too: Christopher Hampton, who has written the book, Stephen Mear, who’s done the choreography, and a lot of the actors. Although he hasn’t worked with Don Black, the veteran lyricist, before. The subject, the Profumo affair of the 1960s, is at first sight a very British event. But the specific often