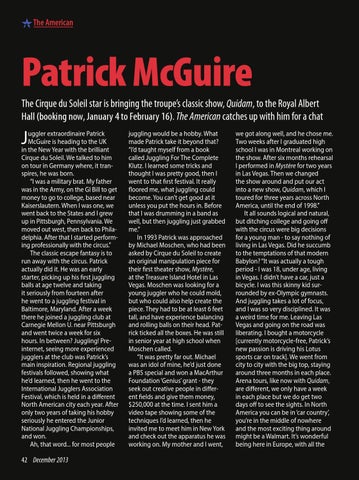 Patrick McGuire The Cirque du Soleil star is bringing the troupe’s classic show, Quidam, to the Royal Albert Hall (booking now, January 4 to February 16). The American catches up with him for a chat

uggler extraordinaire Patrick McGuire is heading to the UK in the New Year with the brilliant Cirque du Soleil. We talked to him on tour in Germany where, it transpires, he was born. “I was a military brat. My father was in the Army, on the GI Bill to get money to go to college, based near Kaiserslautern. When I was one, we went back to the States and I grew up in Pittsburgh, Pennsylvania. We moved out west, then back to Philadelphia. After that I started performing professionally with the circus.” The classic escape fantasy is to run away with the circus. Patrick actually did it. He was an early starter, picking up his first juggling balls at age twelve and taking it seriously from fourteen after he went to a juggling festival in Baltimore, Maryland. After a week there he joined a juggling club at Carnegie Mellon U. near Pittsburgh and went twice a week for six hours. In between? Juggling! Preinternet, seeing more experienced jugglers at the club was Patrick’s main inspiration. Regional juggling festivals followed, showing what he’d learned, then he went to the International Jugglers Association Festival, which is held in a different North American city each year. After only two years of taking his hobby seriously he entered the Junior National Juggling Championships, and won. Ah, that word... for most people

juggling would be a hobby. What made Patrick take it beyond that? “I’d taught myself from a book called Juggling For The Complete Klutz. I learned some tricks and thought I was pretty good, then I went to that first festival. It really floored me, what juggling could become. You can’t get good at it unless you put the hours in. Before that I was drumming in a band as well, but then juggling just grabbed me.” In 1993 Patrick was approached by Michael Moschen, who had been asked by Cirque du Soleil to create an original manipulation piece for their first theater show, Mystère, at the Treasure Island Hotel in Las Vegas. Moschen was looking for a young juggler who he could mold, but who could also help create the piece. They had to be at least 6 feet tall, and have experience balancing and rolling balls on their head. Patrick ticked all the boxes. He was still in senior year at high school when Moschen called. “It was pretty far out. Michael was an idol of mine, he’d just done a PBS special and won a MacArthur Foundation ‘Genius’ grant - they seek out creative people in different fields and give them money, $250,000 at the time. I sent him a video tape showing some of the techniques I’d learned, then he invited me to meet him in New York and check out the apparatus he was working on. My mother and I went,

we got along well, and he chose me. Two weeks after I graduated high school I was in Montreal working on the show. After six months rehearsal I performed in Mystère for two years in Las Vegas. Then we changed the show around and put our act into a new show, Quidam, which I toured for three years across North America, until the end of 1998.” It all sounds logical and natural, but ditching college and going off with the circus were big decisions for a young man - to say nothing of living in Las Vegas. Did he succumb to the temptations of that modern Babylon? “It was actually a tough period - I was 18, under age, living in Vegas. I didn’t have a car, just a bicycle. I was this skinny kid surrounded by ex-Olympic gymnasts. And juggling takes a lot of focus, and I was so very disciplined. It was a weird time for me. Leaving Las Vegas and going on the road was liberating. I bought a motorcycle [currently motorcycle-free, Patrick’s new passion is driving his Lotus sports car on track]. We went from city to city with the big top, staying around three months in each place. Arena tours, like now with Quidam, are different, we only have a week in each place but we do get two days off to see the sights. In North America you can be in ‘car country’, you’re in the middle of nowhere and the most exciting thing around might be a Walmart. It’s wonderful being here in Europe, with all the