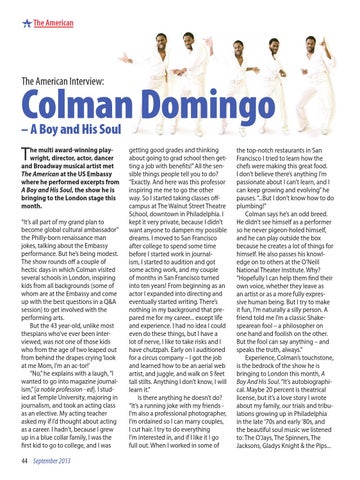 Colman Domingo – A Boy and His Soul

he multi award-winning playwright, director, actor, dancer and Broadway musical artist met The American at the US Embassy where he performed excerpts from A Boy and His Soul, the show he is bringing to the London stage this month. “It’s all part of my grand plan to become global cultural ambassador” the Philly-born renaissance man jokes, talking about the Embassy performance. But he’s being modest. The show rounds off a couple of hectic days in which Colman visited several schools in London, inspiring kids from all backgrounds (some of whom are at the Embassy and come up with the best questions in a Q&A session) to get involved with the performing arts. But the 43 year-old, unlike most thespians who’ve ever been interviewed, was not one of those kids who from the age of two leaped out from behind the drapes crying ‘look at me Mom, I’m an ac-tor!’ “No,” he explains with a laugh, “I wanted to go into magazine journalism,” [a noble profession - ed]. I studied at Temple University, majoring in journalism, and took an acting class as an elective. My acting teacher asked my if I’d thought about acting as a career. I hadn’t, because I grew up in a blue collar family, I was the first kid to go to college, and I was

getting good grades and thinking about going to grad school then getting a job with benefits!” All the sensible things people tell you to do? “Exactly. And here was this professor inspiring me me to go the other way. So I started taking classes offcampus at The Walnut Street Theatre School, downtown in Philadelphia. I kept it very private, because I didn’t want anyone to dampen my possible dreams. I moved to San Francisco after college to spend some time before I started work in journalism, I started to audition and got some acting work, and my couple of months in San Francisco turned into ten years! From beginning as an actor I expanded into directing and eventually started writing. There’s nothing in my background that prepared me for my career... except life and experience. I had no idea I could even do these things, but I have a lot of nerve, I like to take risks and I have chutzpah. Early on I auditioned for a circus company – I got the job and learned how to be an aerial web artist, and juggle, and walk on 5 feet tall stilts. Anything I don’t know, I will learn it.” Is there anything he doesn’t do? “It’s a running joke with my friends I’m also a professional photographer, I’m ordained so I can marry couples, I cut hair. I try to do everything I’m interested in, and if I like it I go full out. When I worked in some of

the top-notch restaurants in San Francisco I tried to learn how the chefs were making this great food. I don’t believe there’s anything I’m passionate about I can’t learn, and I can keep growing and evolving” he pauses. “...But I don’t know how to do plumbing!” Colman says he’s an odd breed. He didn’t see himself as a performer so he never pigeon-holed himself, and he can play outside the box because he creates a lot of things for himself. He also passes his knowledge on to others at the O’Neill National Theater Institute. Why? “Hopefully I can help them find their own voice, whether they leave as an artist or as a more fully expressive human being. But I try to make it fun, I’m naturally a silly person. A friend told me I’m a classic Shakespearean fool – a philosopher on one hand and foolish on the other. But the fool can say anything – and speaks the truth, always.” Experience, Colman’s touchstone, is the bedrock of the show he is bringing to London this month, A Boy And His Soul. “It’s autobiographical. Maybe 20 percent is theatrical license, but it’s a love story I wrote about my family, our trials and tribulations growing up in Philadelphia in the late ’70s and early ’80s, and the beautiful soul music we listened to: The O’Jays, The Spinners, The Jacksons, Gladys Knight & the Pips...