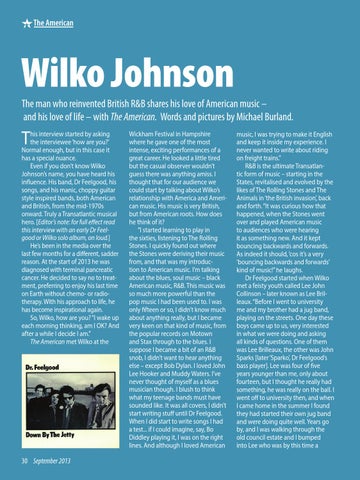 The man who reinvented British R&B shares his love of American music – and his love of life – with The American. Words and pictures by Michael Burland.

his interview started by asking the interviewee ‘how are you?’ Normal enough, but in this case it has a special nuance. Even if you don’t know Wilko Johnson’s name, you have heard his influence. His band, Dr Feelgood, his songs, and his manic, choppy guitar style inspired bands, both American and British, from the mid-1970s onward. Truly a Transatlantic musical hero. [Editor’s note: for full effect read this interview with an early Dr Feelgood or Wilko solo album, on loud.] He’s been in the media over the last few months for a different, sadder reason. At the start of 2013 he was diagnosed with terminal pancreatic cancer. He decided to say no to treatment, preferring to enjoy his last time on Earth without chemo- or radiotherapy. With his approach to life, he has become inspirational again. So, Wilko, how are you? “I wake up each morning thinking, am I OK? And after a while I decide I am.” The American met Wilko at the

Wickham Festival in Hampshire where he gave one of the most intense, exciting performances of a great career. He looked a little tired but the casual observer wouldn’t guess there was anything amiss. I thought that for our audience we could start by talking about Wilko’s relationship with America and American music. His music is very British, but from American roots. How does he think of it? “I started learning to play in the sixties, listening to The Rolling Stones. I quickly found out where the Stones were deriving their music from, and that was my introduction to American music. I’m talking about the blues, soul music – black American music, R&B. This music was so much more powerful than the pop music I had been used to. I was only fifteen or so, I didn’t know much about anything really, but I became very keen on that kind of music, from the popular records on Motown and Stax through to the blues. I suppose I became a bit of an R&B snob, I didn’t want to hear anything else – except Bob Dylan. I loved John Lee Hooker and Muddy Waters. I’ve never thought of myself as a blues musician though. I blush to think what my teenage bands must have sounded like. It was all covers, I didn’t start writing stuff until Dr Feelgood. When I did start to write songs I had a test... if I could imagine, say, Bo Diddley playing it, I was on the right lines. And although I loved American

music, I was trying to make it English and keep it inside my experience. I never wanted to write about riding on freight trains.” R&B is the ultimate Transatlantic form of music – starting in the States, revitalised and evolved by the likes of The Rolling Stones and The Animals in ‘the British invasion’, back and forth. “It was curious how that happened, when the Stones went over and played American music to audiences who were hearing it as something new. And it kept bouncing backwards and forwards. As indeed it should, ‘cos it’s a very ‘bouncing backwards and forwards’ kind of music!” he laughs. Dr Feelgood started when Wilko met a feisty youth called Lee John Collinson – later known as Lee Brilleaux. “Before I went to university me and my brother had a jug band, playing on the streets. One day these boys came up to us, very interested in what we were doing and asking all kinds of questions. One of them was Lee Brilleaux, the other was John Sparks [later ‘Sparko’, Dr Feelgood’s bass player]. Lee was four of five years younger than me, only about fourteen, but I thought he really had something, he was really on the ball. I went off to university then, and when I came home in the summer I found they had started their own jug band and were doing quite well. Years go by, and I was walking through the old council estate and I bumped into Lee who was by this time a