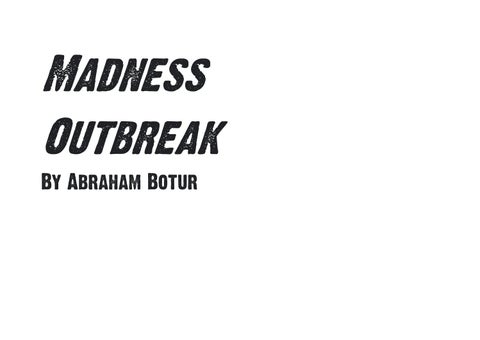 Three prisoners have escaped prison. They want to show the sheriff who is boss. “Here we are,” says Mr Gun. “Yup,” shouts Ben. Mr Gun places an explosive on the door…. BOOM! “Get inside the sheriff’s base, now!” says Mr Gun. “Aargh!” Mr Gun drops on the floor. “Go!” he says. They go inside.

Tom sees something flying overhead. “Eee, it was a spear,” says Ben. “Go without me.” Tom kicks the guard onto the door and slices his body into two bits with a sword. It is really gross.

Tom opens the door. A ten-foot monster with two swords bashes him. Tom shoots at it. The bullets bounce off and fly everywhere. One kills a security guard but Tom knows an idea. He climbs up onto the giant, takes off his mask and shoots him in the brain. He drops dead, breaking the door.

He grabs the sword and throws his spear at another guard. There is another guy that points the middle finger at him. Tom stabs him in the heart and takes his security access card and opens the door.

There is a guy in a hazard suit. He puts his hands up. Tom loads his gun and starts opening fire then puts on the hazard suit and hops into the room. There is an elevator. He takes it down to another room.

Another of the sheriffâ&#x20AC;&#x2122;s henchmen shoots Tom. His utility belt breaks off, so Tom shoots him back. Tom takes his gun but he is out of ammunition so he grabs the gun by the barrel.

Another of the sheriffâ&#x20AC;&#x2122;s guards is ready to fire and kills Tom. The guard puts him in a cell.

Tom wakes up and looks at himself. Heâ&#x20AC;&#x2122;s a zombie now. A guy next to him growls at him to stop trying to bend the cell bars. He breaks one of the bars, hops out but before he kills anybody he twists the piece of metal into a spear shape.

Tom goes to the closest door. There is a guard. They prepare for a battle. Tom stabs his spear at the guard, takes his weapon and kicks open the door.

Tom stabs another guy after chopping off his hands. Two other guards are ready to fight. The sheriff appears â&#x20AC;&#x201C; but suddenly, he enters the elevator doors, escapes and runs to his office to call Gabe.

There are heaps of doors to get to his office, however, and the sheriff finds out Tom has bitten the other two guards. They have turned into zombies.

Tom gets the gun from the guard but the sheriff is already at the elevator door. The sheriff opens it up. Tom quickly loads his gun then hops in the elevator and descends to another room.

A guy with a big long carved spiky stick and a shield blocks Tomâ&#x20AC;&#x2122;s attack, but Tom shoots so much it makes a hole in the shield and kills the guard. Tom then opens the elevator and goes down to the sheriffâ&#x20AC;&#x2122;s office.

The sheriff calls Gabe. Tom starts shooting him and knocks him out before shooting Gabe… but Gabe has two lives. He uses his powers to electrocute Tom, so Tom throws his gun, stabbing Gabe. Gabe drops dead. Tom then picks up a spike and stabs the sheriff. The Sheriff’s last words: Don’t underestimate the Sheriff.