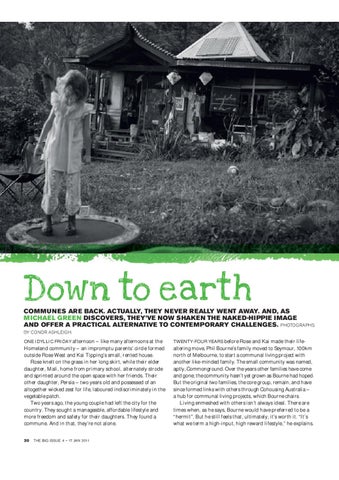 COMMUNES ARE BACK. ACTUALLY, THEY NEVER REALLY WENT AWAY. AND, AS MICHAEL GREEN DISCOVERS, THEY’VE NOW SHAKEN THE NAKED-HIPPIE IMAGE AND OFFER A PRACTICAL ALTERNATIVE TO CONTEMPORARY CHALLENGES. PHOTOGRAPHS

BY CONOR ASHLEIGH. ONE IDYLLIC FRIDAY afternoon – like many afternoons at the Homeland community – an impromptu parents’ circle formed outside Rose West and Kai Tipping’s small, rented house. Rose knelt on the grass in her long skirt, while their elder daughter, Mali, home from primary school, alternately strode and sprinted around the open space with her friends. Their other daughter, Persia – two years old and possessed of an altogether wicked zest for life, laboured indiscriminately in the vegetable patch. Two years ago, the young couple had left the city for the country. They sought a manageable, affordable lifestyle and more freedom and safety for their daughters. They found a commune. And in that, they’re not alone.

TWENTY-FOUR YEARS before Rose and Kai made their lifealtering move, Phil Bourne’s family moved to Seymour, 100km north of Melbourne, to start a communal living project with another like-minded family. The small community was named, aptly, Commonground. Over the years other families have come and gone; the community hasn’t yet grown as Bourne had hoped. But the original two families, the core group, remain, and have since formed links with others through Cohousing Australia – a hub for communal living projects, which Bourne chairs. Living enmeshed with others isn’t always ideal. There are times when, as he says, Bourne would have preferred to be a “hermit”. But he still feels that, ultimately, it’s worth it. “It’s what we term a high-input, high reward lifestyle,” he explains.

Recently, Bourne and the old guard of communal dwellers have been sensing that people are, once again, beginning to see value in their way of life. “I don’t know whether we’re kidding ourselves, but when the people who’ve been in this scene a long time get together, we’re convinced there’s a new energy around,” he says. “People are looking at what’s happening with the world and they’re hungry to find other options. “In current times of climate change, peak oil and social isolation, when the single person household is the fastest growing housing sector, we think it’s time for the next wave of intentional communities,” Bourne says. “But to get from dreaming it to doing it is not easy.” In Australia, rural landsharing communities flourished throughout the 1970s. After the 10-day Aquarius festival in Nimbin in 1973 – often described as Australia’s version of Woodstock – a number of attendees stayed on and started utopian communities throughout northern NSW. The movement was inspired by New Age and simpleliving ideas, together with concern about spiking oil prices, environmental degradation and the limits to economic growth. “The intentional communities of the ’60s and ’70s had a lot of good intentions, but the application was vague,”

Bourne concedes. “In many ways, it was downtrodden by the mainstream as hippie nonsense – a percentage of which had truth to it and a percentage of which missed the point.” The Homeland community was founded in 1977, on a former dairy farm half-an-hour by car from Bellingen, an artsy town on NSW’s mid-north coast. Now, about three-dozen adults and children live there. The members aren’t allowed to own any land, but they can own their home. Each adult pays $30 per week in rent to cover upkeep on the extensive shared facilities, including the recreation house, guests’ cottage, laundry, shower block, barns, orchards and festival fields. The community was modelled on the Findhorn Foundation, a spiritual community in Scotland, famous for mystical gardeners who grew supernaturally large cabbages on sandy soil. But the connection vanished in the early 1980s, as the overseas philosophy became obscured by the haze of marijuana smoke closer to home. Like all communities, membership and motivation has ebbed and flowed. “Five years ago,” one long-term Homeland resident explains, “we were lamenting that we were becoming a geriatric farm.” Then a number of young families started moving onto the land. THE BIG ISSUE 4 – 17 JAN 2011

AT HOMELAND, the afternoon continued on its comfortably

unplanned course. A friend of Rose and Kai dropped in with his toddlers, and two other young mums from up the hill happened by with their daughters. “There are no play dates on Homeland,” Rose explained later. “You don’t ring up the other mother, organise a week in advance and go to a cafe and spend money. It just happens.” While the children whooped, the adults spoke about placentas and sleeping patterns, the uncomfortable crevices that ticks find, and the humility required when asking someone else to remove them. It was an earthy conversation, not an astral one: more permaculture than counter-culture. IN ALL LIKELIHOOD, this kind of practical exchange wouldn’t be uncommon among latter day communal dwellers. “You don’t get naked hippies running around the hills any more,” says Dr Bill Metcalf, a ‘communitarian’ scholar at Griffith University who has published several books on the subject. “A lot of people see communal living as a very sensible option,” Metcalf continues. “They aren’t looking at it in the

utopian sense – it’s just a much more sane way to live in a rural area. The interest is moving to a strata of society that wouldn’t have considered it 20 years ago, because it was seen as too outrageous.” Metcalf says there are hundreds of intentional communities throughout Australia, from spiritual groups to survivalists, nudist colonies to eco-villages. “No matter where you go, we’ve got these communities. Some are very upmarket, some very downmarket.” For two decades, Metcalf has been working on an encyclopaedia of communities established in Australia before the ‘baby boomer’ generation. When he began, he expected it to be a brief undertaking. But, he says, “I keep finding new ones faster than I can research them. In every state there are amazing examples: there are lesbian separatist communes from the 1870s; groups who believed in a single tax; nudist groups; vegetarians. You name it, they’re out there.” JUST AS THE kinds of communities and structures change over time, utopian dreams are also tempered from within. Close to Rose and Kai’s house, along a short walking track, is an open-

walled barn, set among small beds of flowers and vegetables. It is home to Jacque Flavell, who has lived on Homeland for 22 years. “What we’ve gradually come to realise is that you don’t have to try and work it all out so you love everyone,” she said. “When you see someone and you don’t really want to talk to them, it starts to make you sick. Eventually I think: ‘Well, I better do something about myself. I may not get to love them, but I better not let them give me an ulcer.’” Flavell arrived on the community as a single mother with two young children. She had been a cabaret dancer, including a stint with the Moulin Rouge in Paris, but decided to radically simplify her life. She raised her children on the property without a car, avoiding machines wherever possible. “I laugh now, when I look back,” she said. “I thought I would come here and learn from these much more evolved beings, but they were just like us. We’re just a bunch of people who are trying to figure something out. I still have things to learn.” Later in the afternoon, Kai arrived home after teaching a samba drumming class to school kids in another town. He has the broad shoulders of someone who’s grown up on the land but, until recently, little of the practical know-how. (“I’m terribly scared of snakes,” he confided.) He and Rose, like Flavell, both hail from cities. “I’m reaping the benefits of the work other people have put into the community, and it’s been a blessing,” he said. “The relationships are more complicated – I’m still getting used to the protocols. If you see an old fridge, you can’t just throw it out. It takes a long time to get anything done.” The couple are clear about the obstacles associated with life this far from the mainstream, be they snakes and ticks, car-reliance or disputes with ex-members. Even so, their choice makes sense. “If you look around the world and throughout history, I think people have lived like this most of the time,” Rose said. “When I travelled overseas this is how I saw people living: they pool resources and they share work, and a big part of that shared work is raising kids.” Mali entered the room with a present for her mother: a soft, crocheted bird she had made at school. Rose murmured her approval by clucking like a chook, but the child protested. “Oh, it’s a bluebird,” Rose said. “It just looks a bit like a hen.” Unfussed, Mali raced off again, after asking permission to go to the common house with another child. “All the faces around here, I know them all, and they’re my friends,” Rose continued. “I hope to spend many years together raising our kids and doing that all in a beautiful environment, with mountains in the background and a river flowing in front. I can’t ask for more than that.” Michael Green is a regular contributor to The Big Issue and a volunteer with The Sharehood (thesharehood.org), which helps neighbours share resources, skills and smiles. Visit him online at michaelbgreen.com.au.

DIY community IF YOU WANT to start an intentional community, don’t be naive: expect conflict and learn how to get over it. That’s the advice from Dr Bill Metcalf, gleaned from decades researching and living on communities. “None of them run smoothly,” says Metcalf. “And the vast majority of people who want to create a community never succeed.” The flip side, however, is that at their best, communities are socially enriching, environmentally sound and cheap to live on. “Almost invariably, people who grow up in intentional communities say they had a wonderful childhood.” There are some practical challenges. Wedged by strict council regulations and steep property prices, people often have trouble finding suitable land. Also, properties classed as multiple occupancies usually can’t be subdivided, and without the security of individual title, banks take a lot of convincing to approve loans. Increasingly, would-be communities opt for strata title, rather than a cooperative, corporation or tenants-in-common structure. “The old model, where a few hippies would pool their dole cheques and put illegal shacks on a clapped out dairy farm – those days are well and truly gone,” says Metcalf. “Now it requires elaborate financial management. It can cost millions of dollars by the time you get something operating with roads and facilities.” Rural communities aren’t the only option. Phil Bourne, from Cohousing Australia, is promoting an urban hybrid model, called cohousing, in which about 15 to 30 homes are clustered around a common house and open space. The individual dwellings are private and selfcontained, not communal, but the residents pool some resources. The common house might include a shared guest room, kitchen, laundry and shed. The concept began in Denmark in the 1970s and has become popular in Europe and North America. There are about half a dozen cohousing communities in Australian cities already, and several more in planning. “Cohousing has a lot of appeal for current generations because you maintain aintain personal equity and autonomy,” Bourne says. “And And you don’t have to move out to the country. It’s an option for medium density urban living that still has the room for chooks and a veggie garden.”