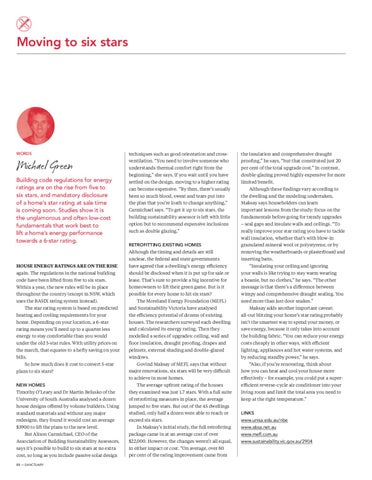 Building code regulations for energy ratings are on the rise from five to six stars, and mandatory disclosure of a home’s star rating at sale time is coming soon. Studies show it is the unglamorous and often low-cost fundamentals that work best to lift a home’s energy performance towards a 6-star rating.

techniques such as good orientation and cross-

the insulation and comprehensive draught

ventilation. “You need to involve someone who

proofing,” he says, “but that constituted just 20

understands thermal comfort right from the

per cent of the total upgrade cost.” In contrast,

beginning,” she says. If you wait until you have

settled on the design, moving to a higher rating

can become expensive. “By then, there’s usually

Although these findings vary according to

been so much blood, sweat and tears put into

the dwelling and the modeling undertaken,

the plan that you’re loath to change anything,”

Carmichael says. “To get it up to six stars, the

important lessons from the study: focus on the

fundamentals before going for trendy upgrades

option but to recommend expensive inclusions

– seal gaps and insulate walls and ceilings. “To

such as double glazing.”

really improve your star rating you have to tackle wall insulation, whether that’s with blow-in

granulated mineral wool or polystyrene, or by

Although the timing and details are still

removing the weatherboards or plasterboard and

unclear, the federal and state governments

HOUSE ENERGY RATINGS ARE ON THE RISE

have agreed that a dwelling’s energy efficiency

“Insulating your ceiling and ignoring

again. The regulations in the national building

should be disclosed when it is put up for sale or

your walls is like trying to stay warm wearing

code have been lifted from five to six stars.

lease. That’s sure to provide a big incentive for

a beanie, but no clothes,” he says. “The other

Within a year, the new rules will be in place

homeowners to lift their green game. But is it

message is that there’s a difference between

throughout the country (except in NSW, which

possible for every home to hit six stars?

wimpy and comprehensive draught sealing. You

The Moreland Energy Foundation (MEFL) and Sustainability Victoria have analysed

heating and cooling requirements for your

the efficiency potential of dozens of existing

home. Depending on your location, a 6-star

houses. The researchers surveyed each dwelling

isn’t the smartest way to spend your money, or

rating means you’ll need up to a quarter less

and calculated its energy rating. Then they

energy to stay comfortable than you would

modelled a series of upgrades: ceiling, wall and

the building fabric. “You can reduce your energy

under the old 5-star rules. With utility prices on

costs cheaply in other ways, with efficient

the march, that equates to a hefty saving on your

by reducing standby power,” he says.

So how much does it cost to convert 5-star plans to six stars?

Govind Maksay of MEFL says that without

“Also, if you’re renovating, think about

how you can heat and cool your house more

to achieve in most homes.

effectively – for example, you could put a super-

The average upfront rating of the houses

efficient reverse-cycle air conditioner into your

Timothy O’Leary and Dr Martin Belusko of the

they examined was just 1.7 stars. With a full suite

living room and limit the total area you need to

of retrofitting measures in place, the average

keep at the right temperature.”

jumped to five stars. But out of the 45 dwellings

standard materials and without any major

studied, only half a dozen were able to reach or

redesigns, they found it would cost an average

package came in at an average cost of over

in either impact or cost. “On average, over 80

cost, so long as you include passive solar design

per cent of the rating improvement came from

But Alison Carmichael, CEO of the

Depending on your location, a 6-star rating means you’ll need up to a quarter less energy to stay comfortable than you would under the old 5-star rules.

J In Victoria, the new 6-star rating is mandatory only for new homes and major renovations, but getting the star rating as high as possible on existing houses like this Melbourne brick veneer home is still desirable and would significantly reduce the energy required for heating and cooling. Initially rated at 2.4 stars, MEFL and Sustainability Victoria’s study found that this house could be upgraded to perform at 5.6 stars by retrofitting a range of sustainability technologies: draught proofing, underfloor and wall insulation, drapes with pelmets and external shading, as well as upgrading the existing ceiling insulation (right). The cost of the retrofits was estimated at $9,947.

which added 0.4 stars to the rating, after drapes and pelmets)

which added 0.2 stars to the rating, after drapes and pelmets)

“This home is orientated well,” Maksay says. “The long axis of the block

“This house is not oriented very well,” Maksay says. “It only has a couple

is east-west, so it has a long northerly aspect and the living areas are

of windows to the north and one of them is in a bedroom. Wall insulation

situated to the north. All the utility areas are on the southern side, with a

small amount of glazing. It has very good sub-floor access so it would be

the house – but there wasn’t sufficient access to install floor insulation.

possible to insulate the ceiling, walls and floor to a high level.”

However, the house is ideally suited to using an efficient gas heater in the kitchen and living space only, because that area is thermally isolated. The Vermont house is centrally heated, so even though it reached a higher star rating, it would have a much larger overall annual heating and cooling bill.”