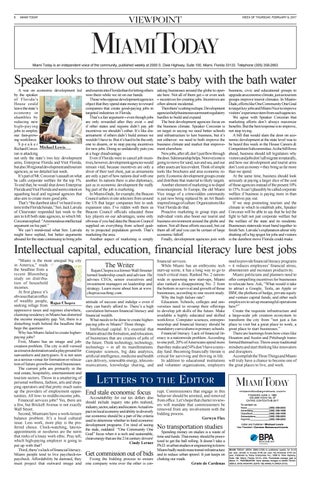 Speaker looks to throw out state’s baby with the bath water A war on economic development led by the speaker of Florida’s House could leave the state’s economy in shambles by reducing new high-paying jobs to employ our fast-growing workforce. Speaker Richard Corco- Michael Lewis ran is attacking not only the state’s two key development arms, Enterprise Florida and Visit Florida, but also 38 regional development and tourism agencies, as we detailed last week. It’s part of Mr. Corcoran’s assault on what he calls corporate welfare for the top 1%. To end that, he would shut down Enterprise Florida and Visit Florida and seems intent on squashing local and regional agencies that also aim to create more good jobs. That’s “the dumbest idea I’ve heard in my time in the Florida Senate,” Sen. Jack Latvala of Clearwater responded last week to the aim to kill both state agencies, to which Mr. Corcoran replied: “Atremendous intellectual argument on his part.” We can’t mind-read what Sen. Latvala might have replied, but better arguments abound for the state continuing to bring jobs

and tourists into Florida than for letting others woo them while we sit on our hands. Those who oppose development agencies object that they spend state money to reward companies that create good-paying jobs in targeted industries in Florida. That’s a fair argument – even though jobs are only rewarded after they exist – and if other states and regions didn’t pay job incentives we shouldn’t either. It’s like disarmament: if others didn’t build armies we wouldn’t have to. But it’s hard to be the only one to disarm, or to stop paying incentives for new jobs. Doing so unilaterally puts you at a huge disadvantage. Even if Florida were to cancel job incentives, however, development agencies would remain vital, because incentives are only a sliver of their tool chest, just as armaments are only a part of how nations deal with one another. In nations there is also diplomacy, just as in economic development the really big part of the job is marketing. In Miami-Dade, for example, the Beacon Council ushers in site selectors from around the US that larger companies hire to seek expansion sites. I’ve ridden with them as Beacon Council officials educated those key players on our advantages, some only obvious if you had data the Beacon Council supplied on everything from school quality to projected population growth. That’s marketing the area. Another aspect of marketing is simply

asking businesses around the globe to operate here. Not all of them get – or even seek – incentives for creating jobs. Incentives are often almost incidental. Then there’s cutting red tape. Development agencies help businesses surmount regulatory hurdles to build and expand. The best development agencies focus on the business climate. Speaker Corcoran is on target in saying we need better schools and infrastructure to lure business, but it’s not either-or: we need to both improve the business climate and market that improvement elsewhere. New jobs, after all, don’t just flow through the door. Salesmanship helps. Not everyone is going to move for sand, sun and sea, and our other assets are less evident. Think of simple tools like brochures and area economic reports. Economic development groups create and distribute that material to likely targets. Another element of marketing is to dispel misconceptions. In Europe, the old Miami Vice image of a crime-ridden community is just now being replaced by an Art Baselinspired image of culture. Organizations like Visit Florida do that. Proactive marketing in group trips and individual visits also boost our tourist and business environment around the globe and nation. Not all these efforts succeed, but cut them all off and you can be certain of large economic falloff. Finally, development agencies join with

business, civic and educational groups to upgrade an economic climate, just as tourism groups improve tourist climates. In MiamiDade, efforts like One Community One Goal to target key jobs and Miami Nice to improve visitors’experience stem from such agencies. We agree with Speaker Corcoran that marketing efforts don’t always maximize benefits. But the best response is to improve, not stop trying. A bill that would slam the door on economic development at the state level was to be heard this week in the House Careers &amp; Competition Subcommittee.As the bill flows ahead, business should tell legislators why visitors and jobs don’t all migrate in naturally, and how our development and tourist arms don’t cost us money – they bring us far more than we spend. At the same time, business should look seriously at paying a larger slice of the cost of those agencies instead of the present 10% to 15%. It can’t plausibly be called corporate welfare if business is paying more in than incentives pay out. If we stop promoting tourism and the climate in which to establish jobs, Speaker Corcoran will be able to say that he led the fight to halt not just corporate welfare but the welfare of the state and its residents. Businesses statewide must band together to finish Sen. Latvala’s explanation about why shutting off a big spigot for jobs and visitors is the dumbest move Florida could make.

financial services. While Miami has an embryonic tech start-up scene, it has a long way to go to reach critical mass. Ranked No. 2 nationwide in spawning new start-ups, Miami also ranked a disappointing No. 2 from the bottom in survival and growth of those businesses, according to one recent study. Why the high failure rate? Education. Schools, colleges and universities need to revamp their offerings to develop job skills of the future. Make available a highly educated and skilled workforce. Computer sciences, entrepreneurship and financial literacy should be mandatory curriculums in primary schools. Financial literacy. Lack of financial literacy is a nationwide problem. According to one poll, 20% of Americans spend more than they make and 54% don’t have a rainyday fund. Becoming financially literate is critical for surviving and thriving in life. In addition to educational institutions and volunteer organizations, employers

need to provide financial literacy programs – it reduces employees’ financial stress, absenteeism and increases productivity. Miami politicians and planners need to offer compelling incentives for businesses to relocate here. Ask, “What would it take to attract a Google, Tesla, an Apple or IBM; the plethora of hedge, private equity and venture capital funds; and other such employers to set up meaningful operations here?” Create the requisite infrastructure and a large-scale job creation ecosystem to transform the city from “not just a fun place to visit but a great place to work, a great place to start businesses.” There are learnings from how cities like Houston and Austin and Pittsburgh transformed themselves. Throw away traditional mindsets and start thinking like innovators and disruptors. Accomplish the Three Things and Miami will truly have a chance to become one of the great places to live, and work.

Intellectual capital, education, financial literacy lure best jobs “Miami is the most unequal big city in America,” reads the headline from a recent Bloomberg study on distribution of household incomes. At first glance it’s obvious that an influx of wealthy people, Rajan Chopra seeking refuge from oppressive taxes and regimes elsewhere, claiming residency in Miami has distorted the income inequality gap. Yet, there is a disturbing truth behind the headline that begs the question: Why has Miami failed to create higherpaying jobs? First, Miami has an image and jobcreation problem. The city is still viewed as a tourist destination and a playground for sun-seekers and partygoers. It is not seen as a serious venue for formation or relocation of future growth-oriented businesses. The current jobs are primarily in the real estate, hospitality, entertainment and tourism sectors. Throw in a smattering of personal wellness, fashion, arts and shopping operators and that pretty much sums up the providers of employment opportunities. All low- to middle-income jobs. Financial services jobs? Yes, there are a few, but Brickell Avenue is not exactly Wall Street. Second, Miamians have a work-leisure balance problem. It’s a local cultural issue. Less work, more play is the preferred choice. Clock-watching, late-toappointments or no-shows are the norm that reeks of a lousy work ethic. Pray tell, which high-paying employer is going to put up with that? Third, there’s a lack of financial literacy. Miami people tend to live paycheck-topaycheck. Affordability be damned, they must project that outward image and

Rajan Chopra is a former Wall Streeter turned leadership coach and advisor. He advises CEOs, senior executives and investment managers on leadership and strategy. Learn more about him at www. chopracoaching.com. attitude of success and indulge – even if they can barely afford to. There’s a high correlation between financial literacy and financial wealth. What needs to be done to create higherpaying jobs in Miami? Three things: Intellectual capital. It’s essential that Miami attract the formation, and relocation, of businesses that are creators of jobs of the future. Think technology, technology, technology – in all its manifestations. Computer sciences, big data analytics, artificial intelligence, medicine and health care delivery, renewable energy, telecommunications, knowledge sharing, and

rupt. Commissioners that engage in this behavior should be arrested, and removed from office. Let’s hope that charter reviewers will mandate that commissioners be removed from any involvement with the bidding process. Gerwyn Flax

Accountability for our tax dollars also should include inquiry into jobs realized, industry, sector, salary and location.Actual impact on local economy and ability to diversify our economic should be a part of the criteria used to determine whether to fund economic development programs. I’m tired of seeing the stale, outdated “One Community One Spending money on studies is a waste of Goal” focus when it is tech and sustainable, time and funds. That money should be prioriclean energy that are the 21st century drivers! tized to get the ball rolling. It doesn’t take a Cindy Lerner Ph.D. in urban studies or engineering to know Miami badly needs mass transit infrastructure and to reduce urban sprawl. It just keeps on Fixing the bidding process to ensure choking our roads. one company wins over the other is corGrato de Cardenas

Get commission out of bids

Special section on Coconut Grove. Just a preview of some of our top stories this week. Includes editorial page. To subscribe, visit www.miamitodaynews.com. 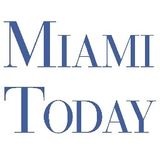