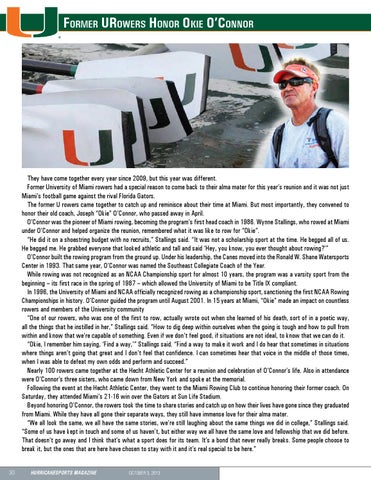 They have come together every year since 2009, but this year was different. Former University of Miami rowers had a special reason to come back to their alma mater for this year’s reunion and it was not just Miami’s football game against the rival Florida Gators. The former U rowers came together to catch up and reminisce about their time at Miami. But most importantly, they convened to honor their old coach, Joseph “Okie” O’Connor, who passed away in April. O’Connor was the pioneer of Miami rowing, becoming the program’s first head coach in 1986. Wynne Stallings, who rowed at Miami under O’Connor and helped organize the reunion, remembered what it was like to row for “Okie”. “He did it on a shoestring budget with no recruits,” Stallings said. “It was not a scholarship sport at the time. He begged all of us. He begged me. He grabbed everyone that looked athletic and tall and said ‘Hey, you know, you ever thought about rowing?’” O’Connor built the rowing program from the ground up. Under his leadership, the Canes moved into the Ronald W. Shane Watersports Center in 1993. That same year, O’Connor was named the Southeast Collegiate Coach of the Year. While rowing was not recognized as an NCAA Championship sport for almost 10 years, the program was a varsity sport from the beginning – its first race in the spring of 1987 – which allowed the University of Miami to be Title IX compliant. In 1996, the University of Miami and NCAA officially recognized rowing as a championship sport, sanctioning the first NCAA Rowing Championships in history. O’Connor guided the program until August 2001. In 15 years at Miami, “Okie” made an impact on countless rowers and members of the University community “One of our rowers, who was one of the first to row, actually wrote out when she learned of his death, sort of in a poetic way, all the things that he instilled in her,” Stallings said. “How to dig deep within ourselves when the going is tough and how to pull from within and know that we’re capable of something. Even if we don’t feel good, if situations are not ideal, to know that we can do it. “Okie, I remember him saying, ‘Find a way,’” Stallings said. “Find a way to make it work and I do hear that sometimes in situations where things aren’t going that great and I don’t feel that confidence. I can sometimes hear that voice in the middle of those times, when I was able to defeat my own odds and perform and succeed.” Nearly 100 rowers came together at the Hecht Athletic Center for a reunion and celebration of O’Connor’s life. Also in attendance were O’Connor’s three sisters, who came down from New York and spoke at the memorial. Following the event at the Hecht Athletic Center, they went to the Miami Rowing Club to continue honoring their former coach. On Saturday, they attended Miami’s 21-16 win over the Gators at Sun Life Stadium. Beyond honoring O’Connor, the rowers took the time to share stories and catch up on how their lives have gone since they graduated from Miami. While they have all gone their separate ways, they still have immense love for their alma mater. “We all look the same, we all have the same stories, we’re still laughing about the same things we did in college,” Stallings said. “Some of us have kept in touch and some of us haven’t, but either way we all have the same love and fellowship that we did before. That doesn’t go away and I think that’s what a sport does for its team. It’s a bond that never really breaks. Some people choose to break it, but the ones that are here have chosen to stay with it and it’s real special to be here.” 30 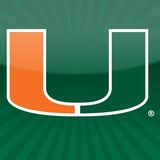