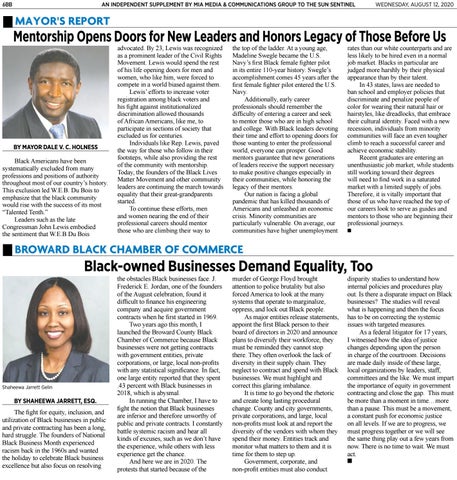 BY MAYOR DALE V. C. HOLNESS Black Americans have been systematically excluded from many professions and positions of authority throughout most of our country’s history. This exclusion led W.E.B. Du Bois to emphasize that the black community would rise with the success of its most “Talented Tenth.” Leaders such as the late Congressman John Lewis embodied the sentiment that W.E.B Du Bois

advocated. By 23, Lewis was recognized as a prominent leader of the Civil Rights Movement. Lewis would spend the rest of his life opening doors for men and women, who like him, were forced to compete in a world biased against them. Lewis’ efforts to increase voter registration among black voters and his fight against institutionalized discrimination allowed thousands of African Americans, like me, to participate in sections of society that excluded us for centuries. Individuals like Rep. Lewis, paved the way for those who follow in their footsteps, while also providing the rest of the community with mentorship. Today, the founders of the Black Lives Matter Movement and other community leaders are continuing the march towards equality that their great-grandparents started. To continue these efforts, men and women nearing the end of their professional careers should mentor those who are climbing their way to

the top of the ladder. At a young age, Madeline Swegle became the U.S. Navy’s first Black female fighter pilot in its entire 110-year history. Swegle’s accomplishment comes 45 years after the first female fighter pilot entered the U.S. Navy. Additionally, early career professionals should remember the difficulty of entering a career and seek to mentor those who are in high school and college. With Black leaders devoting their time and effort to opening doors for those wanting to enter the professional world, everyone can prosper. Good mentors guarantee that new generations of leaders receive the support necessary to make positive changes especially in their communities, while honoring the legacy of their mentors. Our nation is facing a global pandemic that has killed thousands of Americans and unleashed an economic crisis. Minority communities are particularly vulnerable. On average, our communities have higher unemployment

rates than our white counterparts and are less likely to be hired even in a normal job market. Blacks in particular are judged more harshly by their physical appearance than by their talent. In 43 states, laws are needed to ban school and employer policies that discriminate and penalize people of color for wearing their natural hair or hairstyles, like dreadlocks, that embrace their cultural identity. Faced with a new recession, individuals from minority communities will face an even tougher climb to reach a successful career and achieve economic stability. Recent graduates are entering an unenthusiastic job market, while students still working toward their degrees will need to find work in a saturated market with a limited supply of jobs. Therefore, it is vitally important that those of us who have reached the top of our careers look to serve as guides and mentors to those who are beginning their professional journeys.

The fight for equity, inclusion, and utilization of Black businesses in public and private contracting has been a long, hard struggle. The founders of National Black Business Month experienced racism back in the 1960s and wanted the holiday to celebrate Black business excellence but also focus on resolving

the obstacles Black businesses face. J. Frederick E. Jordan, one of the founders of the August celebration, found it difficult to finance his engineering company and acquire government contracts when he first started in 1969. Two years ago this month, I launched the Broward County Black Chamber of Commerce because Black businesses were not getting contracts with government entities, private corporations, or large, local non-profits with any statistical significance. In fact, one large entity reported that they spent .43 percent with Black businesses in 2018, which is abysmal. In running the Chamber, I have to fight the notion that Black businesses are inferior and therefore unworthy of public and private contracts. I constantly battle systemic racism and hear all kinds of excuses, such as we don’t have the experience, while others with less experience get the chance. And here we are in 2020. The protests that started because of the

murder of George Floyd brought attention to police brutality but also forced America to look at the many systems that operate to marginalize, oppress, and lock out Black people. As major entities release statements, appoint the first Black person to their board of directors in 2020 and announce plans to diversify their workforce, they must be reminded they cannot stop there. They often overlook the lack of diversity in their supply chain. They neglect to contract and spend with Black businesses. We must highlight and correct this glaring imbalance. It is time to go beyond the rhetoric and create long lasting procedural change. County and city governments, private corporations, and large, local non-profits must look at and report the diversity of the vendors with whom they spend their money. Entities track and monitor what matters to them and it is time for them to step up. Government, corporate, and non-profit entities must also conduct

disparity studies to understand how internal policies and procedures play out. Is there a disparate impact on Black businesses? The studies will reveal what is happening and then the focus has to be on correcting the systemic issues with targeted measures. As a federal litigator for 17 years, I witnessed how the idea of justice changes depending upon the person in charge of the courtroom. Decisions are made daily inside of these large, local organizations by leaders, staff, committees and the like. We must impart the importance of equity in government contracting and close the gap. This must be more than a moment in time…more than a pause. This must be a movement, a constant push for economic justice on all levels. If we are to progress, we must progress together or we will see the same thing play out a few years from now. There is no time to wait. We must act. n 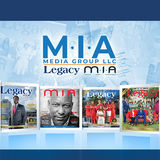