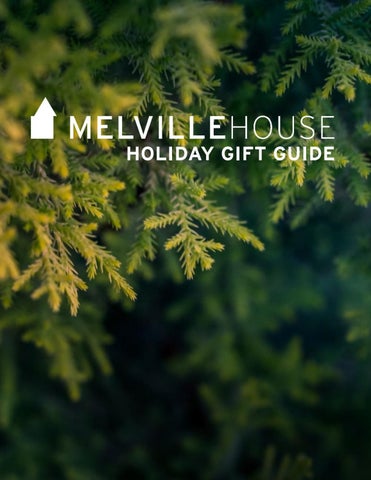 GIFTS FOR EVERYO The Last Interview Series Meet the heroes of art and literature, in their own words, as captured by the journalists who covered their extraordinary careers. Each intimate volume contains a range of interviews from throughtout the subject’s life that will electrify new and dedicated fans alike. ORDER&gt;&gt;

The Citizen Activist Library These classic Melville House handbooks are the perfect gift for every activist. From universal healthcare to civil rights to climate change—we have a book for every cause. ORDER&gt;&gt;

The Art of the Novella Melville House celebrates this renegade art form and its practitioners with titles that are, in many instances, presented in book form for the first time. With 27 titles to browse and authors from the likes of Jane Austen to Leo Tolstoy, there’s something for everyone. ORDER&gt;&gt;

ONE ON YOUR LIST The Bloodless Boy by Robert J. Lloyd For fans of Wolf Hall and The Name of the Rose, a riveting new literary thriller set in Restoration London, with a cast of real historic figures, set against the actual historic events and intrigues of the returned king and his court. ORDER&gt;&gt;

How to Do Nothing: Resisting the Attention Economy by Jenny Odell A NEW YORK TIMES BESTSELLER and One of President Obama’s Favorite Books of the Year In a world where addictive technology is designed to buy and sell our attention, and our value is determined by our 24/7 data productivity, it can seem impossible to escape. But in this inspiring field guide to dropping out of the attention economy, artist and critic Jenny Odell shows us how we can still win back our lives. ORDER&gt;&gt;

Debt: Tenth Anniversary Edition by David Graeber The classic work on debt, now is a special tenth anniversary edition with a new introduction by Thomas Piketty Every economics textbook says the same thing: Money was invented to replace onerous and complicated barter systems—to relieve ancient people from having to haul their goods to market. Here anthropologist David Graeber presents a stunning reversal of conventional wisdom. ORDER&gt;&gt;

“[An] extraordinary book, at once learned and freewheeling.” —London Review of Books

Every Man Dies Alone by Hans Fallada This never-before-translated masterpiece—by a heroic best-selling writer who saw his life crumble when he wouldn’t join the Nazi Party—is based on a true story. It presents a richly detailed portrait of life in Berlin under the Nazis and tells the sweeping saga of one working-class couple who decides to take a stand when their only son is killed at the front. A deeply stirring story of two people standing up for what’s right.

This charming and truly unique debut tells the story of two single, thirty-something men who still live with their parents. They take care of their parents and play board games together. They like to read. They take satisfaction from their work. They are resolutely kind. Sweet, funny, and gentle, Leonard and Hungry Paul is a balm for the soul. Now in paperback! ORDER&gt;&gt;

by Jesse McCarthy “Virtuosic ... glorious in its exploration.” —The New York Times A singular and powerful debut novel about a young black American learning the difficulties of forming your own identity when society has already assigned you one. ORDER&gt;&gt;

by Catie Disabato In the follow up to her smart debut, The Ghost Network, Catie Disabato creates a vivid portrait of a young woman investigating her best friend’s disappearance while navigating codependent friendships, toxic exes, and witchy rituals. ORDER&gt;&gt;

by Barry Schechter George Entmen just turned forty, and he can’t complain. He is a respected hermeneutics professor, beloved by friends and family, and ready to drift quietly into tenured middle age. But then, he discovers he can fly ... sort of. A classic, smart comedy in which a college professor attains mankind’s oldest dream. ORDER&gt;&gt;

A down and dirty gem of a tale—a twisted crime novel that evokes the worlds of Higgins, Highsmith, and Mamet, destined to be a Neo-noir classic.

Based on historic events—a taut thriller about one American diplomat’s year of living dangerously in Tehran in the days leading up to the Iranian Revolution.

A fast-paced, suspenseful thriller based on one of the biggest (and still unsolved) bank robberies in history, written by a former IRA bank robber.

by Yan Ge, translated by Jeremy Tiang From one of the most exciting voices in contemporary Chinese literature, an uncanny and playful novel that blurs the line between human and beast. A New York Times Editors’ Choice! ORDER&gt;&gt;

Another Now by Yanis Varoufakis

What would a fair and equal society actually look like? The world-renowned economist and bestselling author Yanis Varoufakis presents his radical and subversive answer in a work of speculative fiction that recalls William Morris and William Gibson. ORDER&gt;&gt;

The Immortals of Tehran by Ali Araghi A sweeping, multigenerational epic, this stunning debut heralds the arrival of a unique new literary voice. “A highly recommended literary page-turner worth a second reading; fans of Gabriel García Márquez will delight in this fantastical—and fantastic novel.” —Library Journal, starred review ORDER&gt;&gt;

NONFI The Storm is Upon Us: How QAnon Became a Movement, Cult, and Conspiracy Theory of Everything by Mike Rothschild “I hope everyone reads this book. It has become such a crucial thing for all of us to understand.” —Erin Burnett, CNN Its messaging can seem cryptic, even nonsensical, yet for tens of thousands of people, it explains everything. What is QAnon, where did it come from, and is the Capitol insurgency a sign of where it’s going next? ORDER&gt;&gt;

Midnight’s Borders: A People’s History of Modern India by Suchitra Vijayan The first true people’s history of modern India, told through a seven-year, 9,000-mile journey along its many contested borders. A gripping, urgent dispatch from a modern India in crisis, and the full and vivid portrait of the country we’ve long been missing. ORDER&gt;&gt;

Twilight in Hazard: An Appalachian Reckoning by Alan Maimon “Twilight in Hazard paints a more nuanced portrait of Appalachia than Vance did...[Maimon] eviscerates Vance’s bestseller with stiletto precision.” —Associated Press From investigative reporter and Pulitzer Prize finalist Alan Maimon comes the story of how a perfect storm of events has had a devastating impact on life in small-town Appalachia, and on the soul of a shaken nation ORDER&gt;&gt;

Until the World Shatters: Truth, Lies, and the Looting of Myanmar by Daniel Combs This first in-depth piece of reportage about the largest natural resource heist in Asia reveals Myanmar’s world of secret-keepers and truth-tellers. ORDER&gt;&gt;

ICTION Karachi Vice: Life and Death in a Contested City by Samira Shackle “A moving account of the struggles of everyday heroes—and of the unhappy metropolis that needs them.” —The Economist A fast-paced, hair-raising journey around Karachi in the company of those who know the city inside out—from an electrifying new voice in narrative non-fiction. ORDER&gt;&gt;

Gold, Oil, and Avocados: A Recent History of Latin America in Sixteen Commodities by Andy Robinson The past decade has seen major political upheaval in Latin America–from Brazil to Chile to Venezuela to Bolivia—but to understand what happened, ask first where your quinoa and lithium batteries came from. ORDER&gt;&gt;

MEMOIRS The Electricity of Every Living Thing: A Woman’s Walk in the Wild to Find Her Way Home by Katherine May “A graceful memoir of startling self-discovery.” —Kirkus Reviews The New York Times bestselling author of Wintering writes a life-affirming exploration of wild landscapes, what it means to be different and, above all, how we can all learn to make peace with our own unquiet minds. ORDER&gt;&gt;

Trout Water: A Year on the Au Sable by Josh Greenberg “Josh Greenberg is my kind of nature writer.” —The Wall Street Journal Written by Josh Greenberg, manager of the famous Gates Au Sable Lodge, Trout Water is an elegiac memoir about fly-fishing. While struggling to cope with the death of a close friend, Greenberg writes of the solace he takes from fishing and the impact of the natural world on his life. A beautiful reminder to reconnect with nature. ORDER&gt;&gt;

ALL TITLES AVAILABLE AT MHPBOOKS.COM OR WHEREVER GOOD BOOKS ARE SOLD