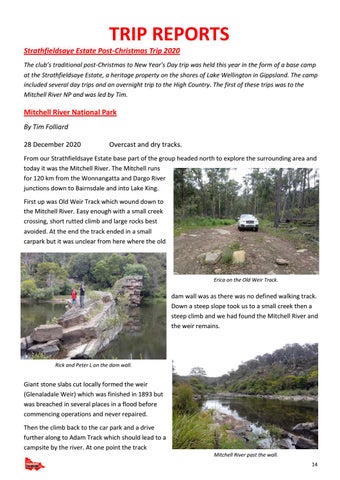 TRIP REPORTS Strathfieldsaye Estate Post-Christmas Trip 2020 The clubâ&amp;#x20AC;&amp;#x2122;s traditional post-Christmas to New Yearâ&amp;#x20AC;&amp;#x2122;s Day trip was held this year in the form of a base camp at the Strathfieldsaye Estate, a heritage property on the shores of Lake Wellington in Gippsland. The camp included several day trips and an overnight trip to the High Country. The first of these trips was to the Mitchell River NP and was led by Tim.

From our Strathfieldsaye Estate base part of the group headed north to explore the surrounding area and today it was the Mitchell River. The Mitchell runs for 120 km from the Wonnangatta and Dargo River junctions down to Bairnsdale and into Lake King. First up was Old Weir Track which wound down to the Mitchell River. Easy enough with a small creek crossing, short rutted climb and large rocks best avoided. At the end the track ended in a small carpark but it was unclear from here where the old

Erica on the Old Weir Track.

dam wall was as there was no defined walking track. Down a steep slope took us to a small creek then a steep climb and we had found the Mitchell River and the weir remains.

Rick and Peter L on the dam wall.

Giant stone slabs cut locally formed the weir (Glenaladale Weir) which was finished in 1893 but was breached in several places in a flood before commencing operations and never repaired. Then the climb back to the car park and a drive further along to Adam Track which should lead to a campsite by the river. At one point the track Mitchell River past the wall. 14

The monthly magazine of the Subaru 4WD Club of Victoria Inc. for January 2021. Note: there has been a gap since August 2020, due to COVID-19 lockdown, during which time magazines were replaced by brief members' newsletters. 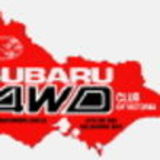