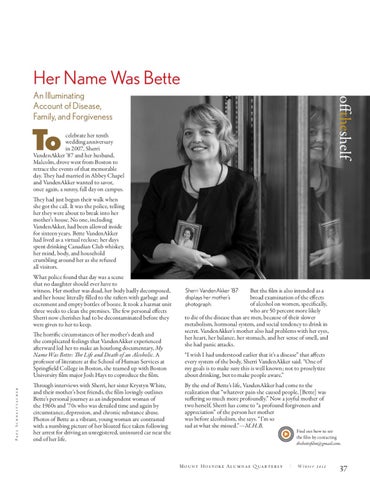 Her Name Was Bette offtheshelf

celebrate her tenth wedding anniversary in 2007, Sherri VandenAkker ’87 and her husband, Malcolm, drove west from Boston to retrace the events of that memorable day. They had married in Abbey Chapel and VandenAkker wanted to savor, once again, a sunny, fall day on campus. They had just begun their walk when she got the call. It was the police, telling her they were about to break into her mother’s house. No one, including VandenAkker, had been allowed inside for sixteen years. Bette VandenAkker had lived as a virtual recluse; her days spent drinking Canadian Club whiskey, her mind, body, and household crumbling around her as she refused all visitors. What police found that day was a scene that no daughter should ever have to witness. Her mother was dead, her body badly decomposed, and her house literally filled to the rafters with garbage and excrement and empty bottles of booze. It took a hazmat unit three weeks to clean the premises. The few personal effects Sherri now cherishes had to be decontaminated before they were given to her to keep.

The horrific circumstances of her mother’s death and the complicated feelings that VandenAkker experienced afterward led her to make an hourlong documentary, My Name Was Bette: The Life and Death of an Alcoholic. A professor of literature at the School of Human Services at Springfield College in Boston, she teamed up with Boston University film major Josh Hays to coproduce the film. Through interviews with Sherri, her sister Krystyn White, and their mother’s best friends, the film lovingly outlines Bette’s personal journey as an independent woman of the 1960s and ’70s who was derailed time and again by circumstance, depression, and chronic substance abuse. Photos of Bette as a vibrant, young woman are contrasted with a numbing picture of her bloated face taken following her arrest for driving an unregistered, uninsured car near the end of her life.

But the film is also intended as a broad examination of the effects of alcohol on women, specifically, who are 50 percent more likely to die of the disease than are men, because of their slower metabolism, hormonal system, and social tendency to drink in secret. VandenAkker’s mother also had problems with her eyes, her heart, her balance, her stomach, and her sense of smell, and she had panic attacks. Sherri VandenAkker ’87 displays her mother’s photograph.

“I wish I had understood earlier that it’s a disease” that affects every system of the body, Sherri VandenAkker said. “One of my goals is to make sure this is well known; not to proselytize about drinking, but to make people aware.” By the end of Bette’s life, VandenAkker had come to the realization that “whatever pain she caused people, [Bette] was suffering so much more profoundly.” Now a joyful mother of two herself, Sherri has come to “a profound forgiveness and appreciation” of the person her mother was before alcoholism, she says. “I’m so sad at what she missed.”—M.H.B.

Find out how to see the film by contacting thebettefilm@gmail.com. 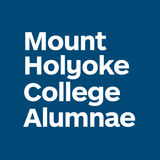 Is Alternative Medicine Good for Your Health? Jail-Break: Building A Smarter Criminal-Justice System From Homeless to Harvard: Determinati...

Is Alternative Medicine Good for Your Health? Jail-Break: Building A Smarter Criminal-Justice System From Homeless to Harvard: Determinati...