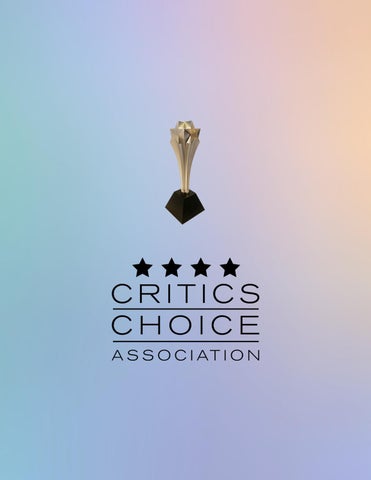 WHAT IS THE CRITICS CHOICE ASSOCIATION?

The CCA is a group of broadcast, radio and online critics as well as entertainment journalists who review films and documentaries as well as scripted and unscripted television. Founded 26 years ago by Joey Berlin, Rod Lurie and 42 founding members, the CCA is now the largest critics organization in the U.S. and Canada with almost 500 members. The CCA was officially formed in 2019 with the merger of the Broadcast Film Critics Association and its sister organization, the Broadcast Television Journalists Association.

WHAT ARE THE QUALIFICATIONS TO BECOME A CCA MEMBER?

Applicants must be professional film critics or entertainment journalists whose coverage is available on a regular basis to a wide audience. Online critics must be a primary critic on their site. Radio film critics must be heard in NY/LA or at least five markets in addition to their primary radio station.

CCA has a full-time Membership Director who is constantly monitoring outlets and postings of its members to insure all CCA members are working critics. CCA also has an outside third-party advisor for complaints and concerns about individual members or issues which can be communicated via the CCA website.

HOW CAN I SEE THE CCA ACTUAL MEMBERSHIP LIST?

HOW DIVERSE IS THE CCA MEMBERSHIP? CCA conducted an extensive Diversity, Equity and Inclusion Survey of the membership in Spring 2021. HERE ARE SOME OF THE RESULTS: POC 25% broken down by: ASIAN 5% FEMALE 32%

Steps are being taken to increase the number of diverse voices even further within the CCA. There is always room for improvement. This is not a new focus for the CCA but rather an ongoing principle of the Board of Directors.

WHAT ELSE IS THE CCA DOING TO PROMOTE INCLUSIVITY?

The CCA has presented the SeeHer Award to strong women who push boundaries and defy stereotypes. Past recipients have included Zendaya, Viola Davis, Claire Foy, Gal Gadot and Kristin Bell.

Since 2014, the CCA has showcased both emerging and established talent at the Celebration of Black Cinema. Next year we will be adding television categories.

This year the CCA is launching the Celebration of Latino Cinema honoring the finest achievements in front of and behind the camera.

WHO VOTES ON THE CCA AWARDS SHOWS?

Only members of the Critics Choice Association can vote. The group is comprised of almost 500 broadcast, radio and online critics as well as entertainment journalists. The inaugural Critics Choice Awards were presented in 1996.

The CCA recently opened an International Branch and is actively recruiting new members. This year, the CCA recruited dozens of new International members.

WHAT CAN CCA MEMBERS ACCEPT REGARDING GIFTS AND TRAVEL?

Studios and Networks may provide token gifts or promotional items capped at a value of $50. Travel is acceptable upon approval from the member’s employer and if the travel is to attend a press junket or special event. The official ethics rules in the CCA bylaws prevent abuse of the system by limiting the acceptable value of gifts and work-related expenses.