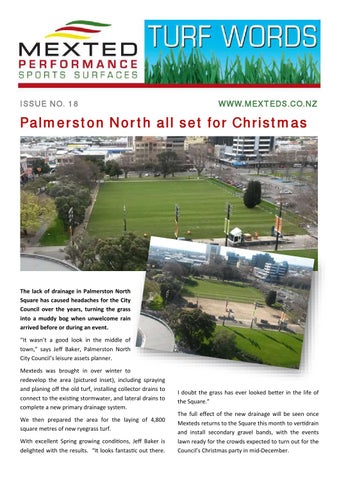 Palmerston North all set for Christmas

The lack of drainage in Palmerston North Square has caused headaches for the City Council over the years, turning the grass into a muddy bog when unwelcome rain arrived before or during an event. “It wasn’t a good look in the middle of town,” says Jeff Baker, Palmerston North City Council’s leisure assets planner. Mexteds was brought in over winter to redevelop the area (pictured inset), including spraying and planing off the old turf, installing collector drains to connect to the existing stormwater, and lateral drains to complete a new primary drainage system. We then prepared the area for the laying of 4,800 square metres of new ryegrass turf. With excellent Spring growing conditions, Jeff Baker is delighted with the results. “It looks fantastic out there.

I doubt the grass has ever looked better in the life of the Square.” The full effect of the new drainage will be seen once Mexteds returns to the Square this month to vertidrain and install secondary gravel bands, with the events lawn ready for the crowds expected to turn out for the Council’s Christmas party in mid-December.

New cricket wickets for Tawa College Tawa College has a strong cricketing focus, with both boys’ and girls’ teams performing at top level, so the students will be looking forward to the New Year when four new wickets just completed by Mexteds will be ready for play.

Vince Comis, Tawa College’s property manager, says the wicket block redevelopment, which involved excavating four old wickets and laying a new base and clay, went “exceptionally well”. With students on site, safety issues were paramount, so Mexteds erected its temporary fencing around the site. Mexteds used Patumahoe clay for the blocks, which are expected to perform much better than the old blocks, which tended to crack up in summer.

Meeting the challenges of multi-purpose venues It’s been a long time since ‘Rocketman’, Elton John, and showman Robbie Williams came to New Zealand, but in both cases Mexteds gets to ‘pick up the pieces’ when the Wellington shows are over. Mexteds reinstated the area where temporary staging was erected for Robbie’s ‘Let Me Entertain You’ concert at the Basin Reserve (right) including vertidraining the compacted ground, laying new turf and sweeping the concert area.

Wellington Regional Stadium Trust turf manager, Hagen Faith, says Mexteds played a pivotal role in getting the Basin Reserve back to where it was before the concert. “The Basin Reserve hasn’t had an event like this in a long time and to be able to come through it and get the work done is a great result. The field is looking great and we are steam rolling towards the first cricket match on 22 November.” Mexteds will be also be turf sweeping the morning after Elton John’s last ever concert at Westpac Stadium.

Minimising the risk of bird strike has seen Mexteds working the night shift to establish 1.7 hectares of AVANEX turf next to the runways at Wellington airport. The deterrent properties of the grass are provided by novel endophytic fungi in the plant that are repellent to insects and the majority of fungal diseases. The specialised grass seed has been developed by Grasslands, a commercial arm of New Zealand’s AgResearch. Mexteds has worked on the project with Sports Surface Design and Management (SSDM), an accredited consultancy for AVANEX. SSDM sports turf consultant, Will Bowden, says Mexteds’ specialist equipment and knowledge were key factors in its selection as the contractor of choice. While the AVANEX seed itself is not difficult to establish, the environment where it is used is challenging, and the turf will require ongoing maintenance once established.

“Airports tend to have heavy soil, are windy, have no irrigation and no turf specialists on site, so they are the challenges.” The work must also be carried out at night when planes aren’t flying, for safety reasons. The contract involves a double spray off of the area to be re-seeded, verti-sweeping to scarify the soil while minimising dust, an application of pre-seed fertiliser and then drilling of the seed. A temporary irrigation system will be installed to ensure the grass is established over summer. A small area of AVANEX was established at the airport last year, and has already proved its value in terms of a fewer birds. The programme to convert all the turf at Wellington airport to AVANEX is expected to continue for a number of years, according to Bowden.

Multi-function Ecodresser a winner track. “It gets really rough with well over 1,000 horses a year on it.” As the track is in virtually constant use, there was just a small window of opportunity to get the work done. After eco-dressing, the track was undersowed and will now be rested until after Christmas. Mexteds has also done eco-dressing at 12 Porirua parks this Spring for the Porirua City Council, and a further three parks for Wellington City Council.

There has been a strong uptake by city councils and race courses for spring renovation work using Mexteds’ Ecodresser topdressing equipment. Using the system for the first time, Derek Collett, track manager for Cambridge Jockey Club, says the result was ‘perfect’. “I have no qualms about it at all, I would recommend it to anyone.”

Geoff Chevis, Porirua City Council’s parks supervisor says “I think the most surprising thing that we have noticed is the fact that it also pulled a lot of thatch out of the surface as well, so not only did it decompact and topdress, it dethatched as well. That was an added bonus for us.” The value of the Ecodresser has also been recognised further afield, with Mexteds undertaking work at Palmerston North and Whanganui this season.

Season’s Greetings Steve, Sue, Ken and the team at Mexteds would like to thank all our clients for choosing Mexteds for your sports turf business during the year. We wish you and your families safe and happy holidays. Our office will be closed from 24 December 2015 until 11 January 2016