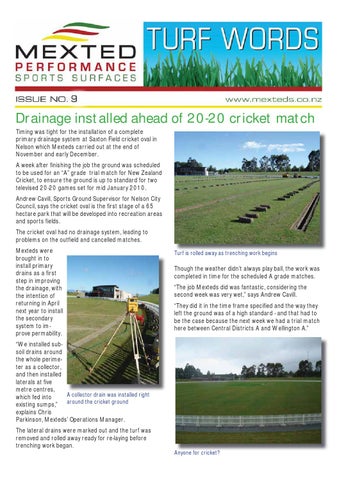 Drainage installed ahead of 20-20 cricket match Timing was tight for the installation of a complete primary drainage system at Saxton Field cricket oval in Nelson which Mexteds carried out at the end of November and early December. A week after finishing the job the ground was scheduled to be used for an “A” grade trial match for New Zealand Cricket, to ensure the ground is up to standard for two televised 20-20 games set for mid January 2010. Andrew Cavill, Sports Ground Supervisor for Nelson City Council, says the cricket oval is the first stage of a 65 hectare park that will be developed into recreation areas and sports fields. The cricket oval had no drainage system, leading to problems on the outfield and cancelled matches. Mexteds were brought in to install primary drains as a first step in improving the drainage, with the intention of returning in April next year to install the secondary system to improve permability.

Turf is rolled away as trenching work begins

Though the weather didn’t always play ball, the work was completed in time for the scheduled A grade matches. “The job Mexteds did was fantastic, considering the second week was very wet,” says Andrew Cavill. “They did it in the time frame specified and the way they left the ground was of a high standard - and that had to be the case because the next week we had a trial match here between Central Districts A and Wellington A.”

“We installed subsoil drains around the whole perimeter as a collector, and then installed laterals at five metre centres, A collector drain was installed right which fed into existing sumps,” around the cricket ground explains Chris Parkinson, Mexteds’ Operations Manager. The lateral drains were marked out and the turf was removed and rolled away ready for re-laying before trenching work began. Anyone for cricket?

New practice wickets at Basin Reserve Mexteds were the main contractors for the construction of a double-ended practice wicket at the Basin Reserve, which was completed in time for this summer’s cricket season. Work on the joint Wellington City Council / Basin Reserve project began in August with the excavation of a former playground area and occasional carpark. The area is twice the length of a normal wicket, accommodating 12 practice strips, six at each end, back to back. Mexteds undertook laser levelling of the whole area and installed drainage and subgrade, as well as completing the concrete boxing work to accommodate the steel support structures and wires along which the nets slide. Patamahoe clay from Auckland was used to form the wickets. Irrigation was installed and the area grassed to international specifications. “We are trying to mimic conditions in the Basin Reserve as close as we can that is the idea with practice wickets,” explains Bryan Dickinson, Operations Manager for Cricket Wellington.

Above: The old playground area at the back of the Basin Reserve that has been transformed into a double-ended practice wicket Inset: Boxing for the steel supports

Until the new practice wickets were installed, players couldn’t train while a match was in progress. “We have practice wickets on the grounds, but it is a requirement for New Zealand Cricket that we provide off-field practice facilities so players can practice while the game is going on.” Dickinson says the work went smoothly. “Mexteds were involved from the early stages and worked well with Brett [Sipthorne], the head groundsman. “Now we just need to start the rolling and see how it plays.”

Above: Supports for the practice nets in place, the finishing touches are made to the subgrade Left: Ready for practice, the turf meets international specifications, matching the test wicket at the Basin Reserve

Gravel banding proves its worth

Mexteds have done extensive gravel banding work for the Wellington City Council in recent months, resulting in improved drainage at Lyndhurst, Helson and Ian Galloway Parks. As a secondary drainage system, gravel banding has made a big improvement to the surface drainage and resulted in more games being played in the parks, even during wet weather. Mexteds gravel bander has been modified to give the

additional advantage of rotary decompaction to promote strong healthy turf that resists stress, improves the uptake of fertiliser and requires less frequent watering. Call us to discuss your gravel banding needs now. This work is normally programmed for the wetter months, when ground conditions are soft. We work in all parts of the country, and would encourage clients to plan ahead to ensure we are able to schedule your gravel banding requirements into our programme.

Waikanae Park reshaping Excessive ponding on the number one rugby field at Waikanae Park due to run off from a bank and an adjacent building saw Mexteds called in to install an open swale drain, sumps and a soak pit in November. Jonny Baxter, Operations Contracts Officer for Kapiti Coast District Council, says keeping the number one field in play for as long as possible, rather than having it shut down because of heavy rain and surface ponding, was the driver behind installing the new drainage system. Mexteds re-shaped the area, installed the sumps and regrassed the area on completion. “It went very well,” says Jonny Baxter. “There were two key factors - specialised equipment and a specialised contractor and an unbelievable break in the weather - you can’t do that kind of work when you have even light rain and we just had a fantastic run of weather so Mexteds could get in and get out.”

The new swale drain and sump at Waikanae Park

Mexteds urges customers to think ahead and place their cricket clay orders in good time for next Spring. We process and dry cricket clay over the summer months, transforming the raw material into a highly specialised product. It arrives at our depot in a plasticine-like state (top left). It is then rotary-hoed several times, stockpiled to dry and

s screened to produce the finished f product. Wicket clays are a mix of sand, silt and clay with a low organic content. Mexteds Sports Turf specialises in wicket block construction and renovation, as well as the supply of wicket clays.

Interested in joining us? We are always on the look out for motivated, keen people who share the same work ethics and passion for providing quality work skills and service to our customers. Call Steve Mexted on 04 233 0703

Best wishes for the festive season from the Mexteds team. We wish you a very happy Christmas and a safe summer break, and look forward to working with you again in the New Year.