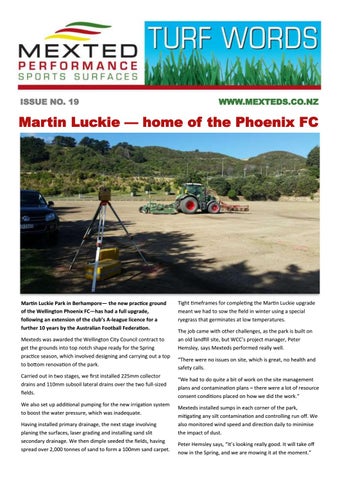 Martin Luckie Park in Berhampore— the new practice ground of the Wellington Phoenix FC—has had a full upgrade, following an extension of the club’s A-league licence for a further 10 years by the Australian Football Federation. Mexteds was awarded the Wellington City Council contract to get the grounds into top notch shape ready for the Spring practice season, which involved designing and carrying out a top to bottom renovation of the park. Carried out in two stages, we first installed 225mm collector drains and 110mm subsoil lateral drains over the two full-sized fields. We also set up additional pumping for the new irrigation system to boost the water pressure, which was inadequate. Having installed primary drainage, the next stage involving planing the surfaces, laser grading and installing sand slit secondary drainage. We then dimple seeded the fields, having spread over 2,000 tonnes of sand to form a 100mm sand carpet.

Tight timeframes for completing the Martin Luckie upgrade meant we had to sow the field in winter using a special ryegrass that germinates at low temperatures. The job came with other challenges, as the park is built on an old landfill site, but WCC’s project manager, Peter Hemsley, says Mexteds performed really well. “There were no issues on site, which is great, no health and safety calls. “We had to do quite a bit of work on the site management plans and contamination plans – there were a lot of resource consent conditions placed on how we did the work.” Mexteds installed sumps in each corner of the park, mitigating any silt contamination and controlling run off. We also monitored wind speed and direction daily to minimise the impact of dust. Peter Hemsley says, “It’s looking really good. It will take off now in the Spring, and we are mowing it at the moment.”

Kelburn park drainage upgrade Nestled between the city and university, Wellington City Council’s Kelburn Park is a high usage venue for urban sport and recreation, used by rugby, league, soccer, winter cricket and touch rugby teams. A poorly performing 25-year old drainage system, as well as increased usage requirements, saw the Council prioritise it for an upgrade this Spring. Mexteds was contracted to install new primary drainage at the park, including 320 metres of collectors and over 3,000 metres of lateral drains. With our new in-house irrigation capability, we also replaced irrigation lines after trenching. In the Autumn we’ll be back to install secondary gravel banding for optimum drainage results.

Playing field and cricket wicket renovations It’s all shoulders to the wheel in Spring, and this year we’ve been able to double our capacity for under-sowing with the refurbishment of an Aitchison drill by our skilled workshop staff, meaning we can now operate two tractors and drills in tandem. On the cricket front, Mexteds has been busy renovating wickets right around the greater Wellington region, verticutting, grooving and sweeping the blocks, before sowing and spreading fresh Patumahoe clay. Strong cricketing colleges, Onslow, Hutt Valley High School, Scots, Silverstream, HIBS, Wellington and Kapiti, have had their wickets renovated, as well all of the Wellington City, Hutt City and Porirua City Council blocks. We’ve also seen a flurry of activity for topdressing and decompaction work to ensure optimum grass growth ahead of the summer sports season. Good results last year at the heavily used Ngatitoa Domain saw Porirua City Council contract Mexteds again this year to vertidrain the park, followed by ecodressing. In one pass the Ecodresser (above right) levels any uneven areas, screens stones and creates a well-aerated surface. Further afield, Whanganui District Council brought us back to ecodress Springvale Park, Spriggens Park—home of Wanganui RFU—and Wembley Park, the largest dedicated soccer venue in the North Island, having seen successful outcomes from ecodressing on a number of its parks last season.

We took a trip across Cook Strait in August to build a new cricket block at Horton Park, Blenheim, for Marlborough District Council and the Marlborough Cricket Association. Mexteds added an extra four strips to the #2 block, bringing it up to a 10 strip block, as part of a redesign of the park to a two block venue. We excavated the area, before laying and compacting the base course and top course, returning a week later to lay the Ward clay, before sowing and fertilizing. “After a number of hurdles it was a great relief that we were able to finally get this project underway,” says Council Reserves & Amenities Officer, Rob Hutchinson.

“Once the work began, working with multiple contractors can be difficult, but Mexteds’ staff were professional, helpful and the quality of the work was high. Mexteds have produced a great product for the Council and Marlborough Cricket." Ed Gilhooly of Marlborough Cricket is now eager to see how the new gravel-based wicket block performs, compared to the existing blocks, which are all clay based. “It’s an experiment for us, but we are keen to see how those four strips play and how easy they are to maintain.” He hopes to be able to start using the extended block in January for the second half of the season.

Artificial wicket build at Wilton Park Mexteds’ operators had some young admirers from a local school during the rebuild of an artificial wicket at Wilton Park, used by Wellington Cricket’s lower leagues and T20 matches. The previous ‘old technology’ lime-based artificial wicket has now been replaced by a concrete base, to improve performance. Mexteds prepared the sub-grade and installed the base course, before setting up the steel trays to the correct dimensions ahead of the concrete pour. Following installation of the artificial turf we built the run-ups and reinstated the area, ready for the first matches of the season to be played at Labour weekend.

Mexteds’ staff update Third generation to steer the business Cameron Mexted has re-joined the family business, and now heads up our management team as Contracts Manager, following several years working in Christchurch and Canada in project management roles on large-scale projects. Cameron was brought up with Mexted Performance Sports Surfaces ‘in the blood’, and is familiar with all facets of our operations, from design and scoping, through to construction methods, plant, machinery, materials and personnel. With a background in quantity surveying and a strong focus on client engagement, Cameron is ready to discuss your sports turf needs and provide advice and quotations. He can be contacted on

New in-house irrigation capability Rob Willis recently joined the Mexteds’ team, bringing specialist expertise in the irrigation area, rounding out the sports turf services we now offer in-house. Rob brings a wealth of experience to the team, with project management of many high profile commercial irrigation jobs throughout New Zealand under his belt including Government House, Westpac Stadium, Basin Reserve, Waitangi Park, Trentham racecourse, Palmerston North Square, Hagley Oval in Christchurch and Saxton complex, Nelson. Rob will help you with the design, pricing, installation and servicing of all irrigation works, and can be contacted on M: 027 203 9729 | E: irrigation@mexteds.co.nz

Team leader promotions At Mexteds we provide ongoing training and opportunities for our staff to expand their knowledge and skills. In recognition of their experience and expertise, two of our staff have been promoted to senior operations positions as Team Leaders. Congratulations to Paul Dockery and Brent Dornan on their new roles.

BBQ prize draw win! We were excited to hear we’d won a flash new Masport barbeque in a prize draw from TransQuip, after buying some new truck tie-downs. It’s already being put to good use in our regular breakfast staff meetings.