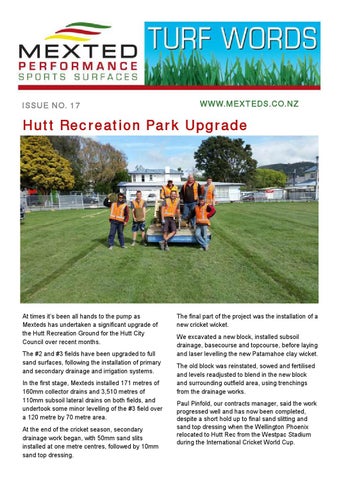 At times itâ&amp;#x20AC;&amp;#x2122;s been all hands to the pump as Mexteds has undertaken a significant upgrade of the Hutt Recreation Ground for the Hutt City Council over recent months. The #2 and #3 fields have been upgraded to full sand surfaces, following the installation of primary and secondary drainage and irrigation systems. In the first stage, Mexteds installed 171 metres of 160mm collector drains and 3,510 metres of 110mm subsoil lateral drains on both fields, and undertook some minor levelling of the #3 field over a 120 metre by 70 metre area. At the end of the cricket season, secondary drainage work began, with 50mm sand slits installed at one metre centres, followed by 10mm sand top dressing.

The final part of the project was the installation of a new cricket wicket. We excavated a new block, installed subsoil drainage, basecourse and topcourse, before laying and laser levelling the new Patamahoe clay wicket. The old block was reinstated, sowed and fertilised and levels readjusted to blend in the new block and surrounding outfield area, using trenchings from the drainage works. Paul Pinfold, our contracts manager, said the work progressed well and has now been completed, despite a short hold up to final sand slitting and sand top dressing when the Wellington Phoenix relocated to Hutt Rec from the Westpac Stadium during the International Cricket World Cup.

Water pooling on the back straight at the Otaki Maori Racing Club saw Mexteds contracted to install 750 metres of 160mm collector drains recently. Race Group Tracks Manager, Kim Treweek, says the club decided to replace some of the older catchment. “It wasn’t working well. The water wasn’t getting away.” The club decided to take a staged approach, installing new collector drains first to see what difference that would make, and at the same time installing junctions so that if in future they wish to extend the drainage they can plug straight into it.

Kim says the collector drains are doing the job. “It’s looking fantastic, even with the rain we’ve had to date, which has been a reasonable amount, it’s going really well.” While Mexteds was installing the collector drains, the area continued to be used for morning training, and racing continued outside the works area. “The day to day work and tidy up at the end of the night for horse training the next day was fantastic,” says Kim. “It was clean and tidy and nothing was left around that would impact on the training.”

A flagship project for Wellington College this year saw Mexteds brought in to reshape and laser level the sports fields to create a new grade to improve surface drainage. Mexteds planed off 20mm across the playing field, repaired and upgraded a sewer line and re-sowed the newly upgraded playing fields. “The fields were levelled out to remove low spots and facilitate a better run-off during heavy

rains, meaning the surface will be much improved for both winter and summer sports,” says Peter Schuyt, chair of the board of trustees.

Mexteds has also been working at the Awapuni Racecourse in Palmerston North this autumn, forming an alternate top bend on the track for use in winter months. The work involves creating transition areas to marry an existing grass track on the inside of the home bend with the front and back straights. The first stage saw Mexteds planing off the turf and stripping and stockpiling 100mm of topsoil prior to reshaping the camber. The subgrade was reshaped and laser levelled, and the topsoil replaced over the

newly graded area. Mexteds also installed 750 metres of primary novacoil collector drains on the inside of the running rail, and 3,700 metres of transverse diagonal drains across the tracks at five metre centres, all at a depth of 500mm.

Mexteds has been involved in the transformation of Redwood Park with benefits for both the Tawa football and softball fraternities. Mike Wood, Chair of the Tawa Association Football Club, says the community negotiated with Wellington City Council for an upgrade of Redwood Park, because once it started raining in winter the field was in ‘dreadful condition’ meaning the field was closed more often than not. Mexteds was contracted to install extra primary drainage on the #1 soccer field, followed by secondary sandslits and sand top dressing.

The irrigation system was extended into the adjacent softball outfield, as in summer the area was hard and dry, and the home plate on the softball diamond was also upgraded to a synthetic batters’ box. “Normally the softball players slide in and it digs it out, but this remains stable and they don’t have to carry out repairs throughout the season.” Now Mike Wood says, “It looks a picture, it looks fantastic. Mexteds did a good job.”

Reinforced turf system for Westpac Stadium A new system to replace areas of damaged turf at Wellington’s Westpac Stadium, saw Mexteds called in to laser level the growing area at Turflands turf farm in Palmerston North. The work involved achieving final grades prior to rolling out the netting in which the grass is grown. Ken Bailey, our general manager, explains: “In this system, the grass grows on a backing, so it is a lot more stable, and you don’t have to rely on the strength of the grass growth and root structure.” The system is used extensively overseas, including in the United States, and is ideal for sand-based fields, such as the Westpac Stadium, as you don’t need to wait for the root structure to grow in. Instead you can replace the turf and play on it the next day.