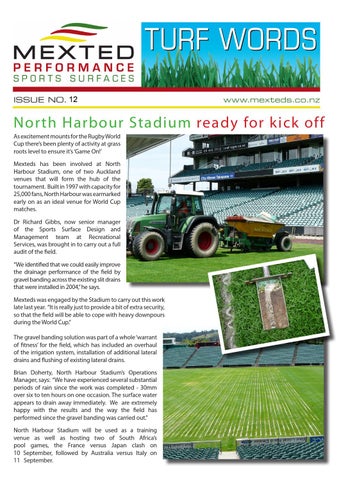 North Harbour Stadium ready for kick off As excitement mounts for the Rugby World Cup there’s been plenty of activity at grass roots level to ensure it’s ‘Game On!’ Mexteds has been involved at North Harbour Stadium, one of two Auckland venues that will form the hub of the tournament. Built in 1997 with capacity for 25,000 fans, North Harbour was earmarked early on as an ideal venue for World Cup matches. Dr Richard Gibbs, now senior manager of the Sports Surface Design and Management team at Recreational Services, was brought in to carry out a full audit of the field. “We identified that we could easily improve the drainage performance of the field by gravel banding across the existing slit drains that were installed in 2004,” he says. Mexteds was engaged by the Stadium to carry out this work late last year. “It is really just to provide a bit of extra security, so that the field will be able to cope with heavy downpours during the World Cup.” The gravel banding solution was part of a whole ‘warrant of fitness’ for the field, which has included an overhaul of the irrigation system, installation of additional lateral drains and flushing of existing lateral drains. Brian Doherty, North Harbour Stadium’s Operations Manager, says: “We have experienced several substantial periods of rain since the work was completed - 30mm over six to ten hours on one occasion. The surface water appears to drain away immediately. We are extremely happy with the results and the way the field has performed since the gravel banding was carried out.” North Harbour Stadium will be used as a training venue as well as hosting two of South Africa’s pool games, the France versus Japan clash on 10 September, followed by Australia versus Italy on 11 September.

A better viewing experience for fans has been the driver behind work to re-align the cricket block at Karori Park, which Mexteds recently undertook for Wellington City Council. WCC Sports Field Manager, Trevor Jackson, says Cricket Wellington, NZ Cricket and the Basin Reserve Trust promoted the idea to re-orientate the block to improve the view for spectators, including those who choose to watch on screens from the clubrooms. Mexteds moved the block 45 degrees and re-aligned the perimeter drainage and irrigation. Patamahoe clay was used to match the existing cricket block. “We had to continue that through; we didn’t want any differences in quality of play,” explains Jackson. The block will be back in operation ready for the season start in October or early November. “Mexteds did a great job,” says Jackson . “They have the expertise, knowledge and machinery, so we know it is going to be compacted well and match with the existing block.”

Come and visit us at the New Zealand Turf Conference and Trade Show 2011 being held at the brand new Claudelands Convention and Exhibition Centre, Hamilton, 27 - 29 June 2011 Steve, Chris and Paul will be at Stand 38, ready to talk to you about gravel banding, and decompaction solutions.

Though Christchurch ’s plans to host Rugby World Cup games were dashed by the February 22 earthquake, the drainage upgrade at privately-owned Christchurch Park , which was to have been used as a Cup training venue, has gone ahead regardless. Andrew Rutledge of Proicere Ltd managed the project. He says the park’s 20 year old sand slits were no longer performing. Sports turf consultant, Dr Richard Gibbs, was brought in to redesign the drainage, and he worked closely with Mexteds’ Operations Manager, Chris Parkinson, to get the design and desired levels correct. While time constraints meant a full re-levelling was decided against, the interim upgrade was designed by Parkinson and Gibbs in such a way as to ensure that the work undertaken would not compromise future renovation plans. The 10 day project involved installing some primary and lateral drains, as well as carrying out gravel banding on the field, which is home to Christchurch Rugby Club. Since Mexteds completed the work in March, games have resumed on the park. The results have been very positive, says Andrew Rutledge, with good grass growth in all but one area, which was affected by liquefaction from the earthquake.

TreMor’s positive impact on Winter work There’s no rest for a sports turf specialist, even in winter. At this time of year many will be looking at options for rejuvenating fields after intensive summer play. Mexteds offers a range of solutions, including our TreMor rotary decompactor, ideal for situations where drainage is compromised by a compacted top layer that is preventing water from percolating through to primary drains. The TreMor slices through to a depth of 300mm, connecting the surface with the subsoil drains below. “This technology also promotes better root depth,” says Mexteds’ Operations Manager, Chris Parkinson. The TreMor’s even ‘heave’ and lack of soil disturbance ensures rocks and stones are not brought to the surface, making it a first choice for high performance sports fields, as well as golf courses and race courses. “Another key advantage is that the sports surface can be used immediately,” says Parkinson. For deeper decompaction requirements, Mexteds also operates two vibrating plows and undersowers, with a penetration of 450-500mm.

Gravel banding a winner for WCC Secondary drainage installed recently at Kilbirnie and Karori Parks for Wellington City Council is already having a big impact, according to WCC Sports Field Manager, Trevor Jackson. Mexteds gravel banded both sports fields earlier this year, and with the rugby season now underway the investment is proving its worth. “Last season the grounds were closed for a large part of the time,” says Jackson . “This year they are playing two to three games in the course of a weekend, which we wouldn’t have been able to do last season.” At Karori Park , two-thirds of the playing area was gravel banded this year. Jackson says: “It’s easy to see where it has been done and where it hasn’t, showing the benefits of installing this sort of drainage in existing sports fields.”

TopCon Lightbar guides the way to greater efficiency Straight lines, mapping and tracking just got easier with the installation of TopCon’s 110 GPS Lightbar Guidance System in Mexted’s tractor fleet. “The TopCon is a GPS unit with a monitor and light bar screen, which gives our operators a straight line to follow, as well as tracking where they are going and where they’ve been,” says director, Steve Mexted. The system also has the advantage of avoiding overlapping or missing areas. “It helps our efficiency, as the system eliminates wastage of time as well as materials such as seed and fertiliser,” says Steve Mexted. The computer system tracks and stores details of the areas treated, and the time taken. This information can be accessed again in future years, which helps with planning and quoting. Daily reports and print outs on areas worked will streamline accounting processes. In stage two of the rollout, Mexted’s operators can also look forward to the TopCon “add in” hands-free auto steering technology. Mexteds were delighted to be chosen as a finalist in the Supporting Gold category of the Wellington Gold Awards held at the TSB Arena on 18 May. Mexteds entered the prestigious Wellington Gold Awards following our success as winners of the trade services category at the Westpac 2010 Porirua City Business Excellence Awards.

“We were the only Porirua-based finalists at the Wellington Gold Awards, which recognise enterprise and excellence along with innovation and technology, something we are always striving to achieve,” says Sue Mexted.

Mexteds - ahead of the game!

Don’t miss the next issue of Turf Words! You’ll be the first to know about another ‘first in New Zealand’ for Mexteds, with the release of some exciting new sports surface maintenance equipment!