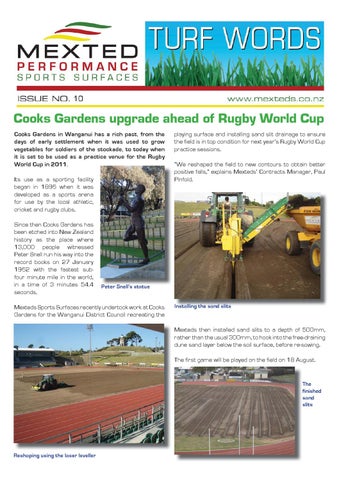 Cooks Gardens upgrade ahead of Rugby World Cup Cooks Gardens in Wanganui has a rich past, from the days of early settlement when it was used to grow vegetables for soldiers of the stockade, to today when it is set to be used as a practice venue for the Rugby World Cup in 2011. Its use as a sporting facility began in 1896 when it was developed as a sports arena for use by the local athletic, cricket and rugby clubs. Since then Cooks Gardens has been etched into New Zealand history as the place where 13,000 people witnessed Peter Snell run his way into the record books on 27 January 1962 with the fastest subfour minute mile in the world, in a time of 3 minutes 54.4 seconds.

Mexteds then installed sand slits to a depth of 500mm, rather than the usual 300mm, to hook into the free-draining dune sand layer below the soil surface, before re-sowing. The first game will be played on the field on 18 August.

area in Hutchison Road, Newtown as a synthetic all-weather field has saved soccer and rugby enthusiasts from many disappointing weather cancellations this season.

Mexteds’ return to the South Island in April saw them continue with the upgrade of the grounds, installing secondary drainage using a gravel banding system.

Mexteds subcontracted to Wilkinson Civil Construction, and was involved in laser levelling the field, which also includes a warm up area.

“Gravel banding is an economical solution for secondary drainage, and is popular with clients,” says Chris Parkinson, Mexteds Operations Manager.

The grounds have been used for several weeks for both rugby and soccer matches ahead of the official opening. The field is marked for both codes and both sets of posts are permanently erected.

The T injected bands are used to connect the gravel backfill in the existing lateral pipe drainage system to t the surface. On the recommendation of Dr Richard Gibbs of Sports Surface Design and Management (SSDM), Mexteds then spread a 5mm layer of sand over the t oval. This followed T an independent research report published in March by SSDM on gravel banding that identified the importance of the sand layer in preventing the bands from being capped with soil during play. “The sand layer will improve the longevity of the drainage system. It protects the gravel bands and stops them from silting up and getting contaminated,” explains Chris Parkinson. Meanwhile the Mexteds d team were running i a second d job j b simultaneously at Saxton, installing subsoil drains on the top soccer field as part of Nelson City Council’s staged 65 hectare development of recreation areas and sports fields at the park.

“It’s made a huge difference already,” says Trevor Jackson, Wellington City Council’s Sports Field Manager. “It’s being used extensively and is already at 75 percent capacity. We’ve had great feedback” The field is used by all age groups from four year-olds to seniors, with Chatham Cup games played there recently. As a new sports field, the ground has taken pressure off other grounds this winter and Wellington City Council hopes to put in a further four or five synthetic fields over the next few years.

Get your free report on gravel banding today! Mexted Performance Sports Surfaces and Recreational Services Ltd recently commissioned Sports Surface Design & Management to provide an independent report on gravel banding that we could circulate to our clients to assist them when considering sports turf drainage options. The report covers • Gravel banding installation methods and uses • Machinery used • Cost benefits of gravel banding compared to soil based fields and slit drained sand carpet fields • An overview of the advantages and disadvantages of gravel banding • Information on completed projects. If you would like a copy of this report please contact Mexted’s offices. Injected Drainage Technology – Gravel Banding – Overview of machinery, applications and uses. Written by Marke Jennings-Temple BSc (Hons) MSc, EngD, Reviewed by Richard Gibbs BSc (Hons), PhD

Sand carpet upgrade for Hutt CityÊs premier park Mexteds has been involved in a major upgrade of Hutt Recreation No. 1 ground, the home to the Hutt Old Boys Marist, one of Wellington’s leading rugby clubs. The work was undertaken for Hutt City Council in March and involved a complete upgrade of the former soil based field to a full sand carpet.

“It was good to have an input into the initial design stage, which resulted in no problems or delays during the construction,” says Steve Mexted. “We enjoyed an excellent working relationship with Aaron Marsh and the Hutt City Council.”

Sports Grounds Assets Manager, Aaron Marsh, says as other councils have introduced sand carpet fields, Hutt City was keen to be able to offer similar quality playing surfaces for its premier parks. A further driver to complete the work this year was the fact that Hutt City is providing a training venue for two teams in the 2011 Rugby World Cup. The standard specification required a sand carpet field. Planing off the old turf

“Given Mexted’s expertise - and in my view they are the only contractor within n the lower North Island that can do that at - we engaged them directly,” says Marsh.

Step o one was to plane off and remove the existing turf and a then laser grading and reshaping the subsurface surfa to new contours to aid drainage. “We then installed a new irrigation system and subsoil network including 1300 metres of primary drainage,” says Chris Parkinson, Mexteds pri Operations Manager. Op Over 14 kilometres of sand slits were installed O a one metre centres to provide secondary at drainage, and the whole field was then sand carpeted.

A good run of weather saw the job finished at the end of April two weeks ahead of schedule. Aaron Marsh is delighted with the results saying the improved playing surface will mean more usability, and he expects to see the ground used by a wider variety of sports. “Mexteds have done a terrific job,’ he says.

Junior Soccer field upgrade relieves pressure for WCC Wellington City Council’s Liardet Park, Berhampore had a makeover recently, when Mexteds were brought in to help overcome a range of issues that were affecting use of the park. “This was an ex-landfill site with very poor drainage and surface run off and heavy clay soils,” says Trevor Jackson, Wellington City Council’s Sports Field Manager. The grounds are used for junior football, which is a growth area. “We are under pressure for that size field,” says Jackson. However the Liardet Road grounds were often closed, even in a normal winter, and in summer it was ‘rock hard’ and the grass burnt off quickly. “It was one extreme to the other.” The upgrade work included re-shaping the 3.9 hectare park, T which is divided into seven soccer fields. w ““We imported 1200 cubic metres of top soil as part of the reshaping, as well as some minor cutting to fill,” says Chris Parkinson, Mexteds’ Operations Manager. The Mexteds team then installed 3,500 metres of primary T drainage before reinstating the area and re-sowing, finishing tthe work at the end of April.

Trevor Jackson is delighted with the results. “The way it’s looking T sso far there is an improvement already. We might get some use of it towards the end of August. He stressed the importance tto the Wellington City Council of work being completed on time and within budget, as was the case with this contract.

“Mexteds always do a great job for us. They always understand what we require, what the finished product should look like - they are very conscientious. It’s a great job done, on time and it came through very well. The results are there already.”

Welcome to Rob Elenor M Mexteds welcomes Rob Elenor to the team as a machine operator. Rob hails from North Yorkshire, UK, across the moors from Whitby, so it is apt that having come from halfway across Y tthe world he has now made his home in Whitby, New Zealand. B Before coming to New Zealand Rob was head green keeper at Thirsk & Northallerton golf club near York. Last year his family visited relatives here and fell in love with the place. They returned to the Y UK, quit their jobs and returned to New Zealand, where Rob saw Mexteds advertising for staff in U Pitchcare Oceania. “I was impressed with the Mexteds’ website, it was really informative,” says Rob, P who applied to join the company. w M Mexteds is very happy to have Rob on board. “We helped with the immigration process and it has been a great success, he has fitted in so well,” says Sue Mexted who was involved with the h rrecruitment. Rob’s happy with his new job too. “It’s brilliant, it’s varied, we get to different locations and they are a good bunch of guys. “Some of the work is new and some of it is very similar to what I a have done in the UK, but with better equipment and higher profile jobs. It’s challenging all the time.” h