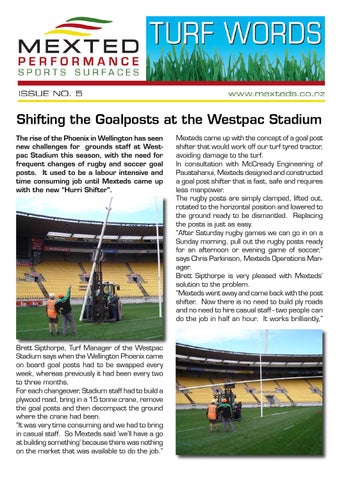 Shifting the Goalposts at the Westpac Stadium The rise of the Phoenix in Wellington has seen new challenges for grounds staff at Westpac Stadium this season, with the need for frequent changes of rugby and soccer goal posts. It used to be a labour intensive and time consuming job until Mexteds came up with the new “Hurri Shifter”.

Brett Sipthorpe, Turf Manager of the Westpac Stadium says when the Wellington Phoenix came on board goal posts had to be swapped every week, whereas previously it had been every two to three months. For each changeover, Stadium staff had to build a plywood road, bring in a 15 tonne crane, remove the goal posts and then decompact the ground where the crane had been. “It was very time consuming and we had to bring in casual staff. So Mexteds said ‘we’ll have a go at building something’ because there was nothing on the market that was available to do the job.”

Mexteds came up with the concept of a goal post shifter that would work off our turf tyred tractor, avoiding damage to the turf. In consultation with McCready Engineering of Pauatahanui, Mexteds designed and constructed a goal post shifter that is fast, safe and requires less manpower. The rugby posts are simply clamped, lifted out, rotated to the horizontal position and lowered to the ground ready to be dismantled. Replacing the posts is just as easy. “After Saturday rugby games we can go in on a Sunday morning, pull out the rugby posts ready for an afternoon or evening game of soccer,” says Chris Parkinson, Mexteds Operations Manager. Brett Sipthorpe is very pleased with Mexteds’ solution to the problem. “Mexteds went away and came back with the post shifter. Now there is no need to build ply roads and no need to hire casual staff - two people can do the job in half an hour. It works brilliantly,”

decompactor in action. “We did a demo of the SandMaster at Porirua #2 park and two demos of the rotary TreMor at Karori Park,” says Chris Parkinson. “The TreMor is unusual and attracted a lot of interest, and people watching the SandMaster were quite amazed.” The SandMaster can be used on hard surfaces and has the added advantage of decompacting at the same time. “It is the only one in New Zealand, and it does a really good job without making any mess.”

(l to r) Chris Parkinson, Paul Pinfold, James Bradford and Cameron Mexted The NZ Turf Conference and Trade Show held at Wellington’s Westpac Stadium in July was a great opportunity to meet others in the industry and spread the word about the specialised equipment and services Mexteds has to offer. Mexteds’ Contracts Manager Paul Pinfold and Operations Manager Chris Parkinson gave a presentation on sports field drainage and reconstruction at the Conference, focusing on recent major contracts completed at Karori Park in Wellington and Endeavour Park in Picton. RoboticTotal Station Cameron Mexted joined other staff on the Mexteds stand to demonstrate the Total Station, a surveying tool that enables Mexteds to deliver a full surveying service to clients. “At the Conference we produced plans and showed 3D models of work we’ve done at the Basin Reserve and Porirua Park #2 using Total Station” says Cameron Mexted. “The roboticTotal Station will allow us to upgrade from semi to full automation of all our laser finishing, trenching and constructing equipment,” Mexteds uses Total Station to design drainage systems, produce contour plans for before and after playing field redevelopment and to calculate accurate measured units. “Total Station has been used mainly in the construction industry, but its precision robotic nature makes it ideal for our type of work,” says Cameron Mexted. Latest Machinery on Display During the conference Mexteds’ Blec SandMaster and TreMor rotary decompactor were on display out on the field. Both these machines were imported from the UK earlier this year, and attracted a strong interest. After the conference there was an opportunity to see the Blec SandMaster and the TreMor rotary

The robotic Total Station: Cameron Mexted holds the glass prism that reflects the electronic distance measuring (EDM) device signal from the theodolite [pictured above left on our stand at the Sports Turf conference]

Game ON! At the NZ Turf Conference we took the opportunity to launch our new brand - “Mexted Performance Sports Surfaces”. Sue Mexted has played a leading role in co-ordinating the rebranding exercise. She explains: “Mexteds has been providing sports turf solutions for over 20 years and we felt it was time to take a look at where we wanted to position ourselves for the future and to iterate the values we bring to our work. “We wanted to develop a brand that reflected the fact that we do a lot more than just sow and maintain grass. We wanted a name that we could move forward on, continuing to embrace leading edge technologies and being innovative. We also wanted to underline our customer focus, enthusiasm, integrity and the fact we strive for excellence in all we do - a commitment that ‘good enough’ is never enough.” Check out our new website www.mexteds.co.nz.

Fit for the Phoenix

Mexteds staff have been working over winter on the upgrade of Newtown Park #2 field, which will be used as the practice ground for the Wellington Phoenix premier league soccer team. The field has been sand slitted, irrigation installed and extended, and we are now finishing building up the sand carpet to enable it to withstand intensive use. It will be Game ON! for January 2008.

Preparing for summer .... With summer approaching our work has had a strong cricket focus in the past few weeks. Piles of wicket clay are drying in the yard, while Mexteds staff have been busy coring, dethatching, sandspreading and undersowing - in short renovating cricket blocks and sports fields for schools and councils throughout the greater Wellington area ready for the summer codes. Mexteds staff are also building new cricket blocks for Hutt City Council and Wellington City Council as well as a couple of colleges. Increasingly councils are turning to artificial cricket blocks and we have been working on the construction of a number of these for Wellington and Porirua City councils. “This is an area we increasingly want to move into,” says Steve Mexted. “There is very little difference between laying natural and synthetic turf, and it is becoming more and more popular for hockey, soccer, tennis, basketball and multi-sport areas. “The underlying work for us is the same - consult and design, drainage and construction, and care of the finished surface.”

The UK Connection Early in July, Sue and Steve Mexted visited the United Kingdom, spending ten days visiting various machinery suppliers and worldrenowned sports turf contractors including John Mallinson from J Mallinsons Ltd and John Hewitt from Hewitt Sportsturf. “It was a great opportunity to see some of the world’s best known sporting venues and to talk to the people who keep their turf in top condition,” says Steve Mexted. Steve and Sue Mexted visited Manchester City Stadium and Old Trafford, saw work underway in the reconstruction of a race track in Manchester, as well as the set-up and operations of Mallinsons and Hewitts. “There was so much that we share with our business doing the same type of work and facing the same challenges,” says Steve. “Being on the other side of the world makes very little difference to the operation.” “It is also great to know that what we do, and our methods, are up with the best in the United Kingdom.” Another highlight of the trip was the opportunity to spend time with Geoffrey Davidson, who is held in high regard as the UK ‘guru’ on field drainage systems and known internationally for his work and development in drainage methods and construction.

Several of the Mexteds team headed to Christchurch last month, where the company was subcontracted by Grounds and Services Ltd to install 4,900 metres of primary drainage for two rugby fields at Prebbleton Domain. GSL Operations Manager, Andrew Ward, says the job went well. “Mexteds did an excellent quality job from start to finish.”

Steve and Sue Mexted with Geoffrey Davidson “We made great business contacts which have grown into real friendships,” says Sue Mexted. “The hospitality of everyone we visited was just fantastic, We hope we can return the favour some day.

Welcome on Board Mexteds welcomes on board two new staff members,

Our new mechanic, Glen Ritchie, brings a wealth of experience to the job. Glen spent 20 years in the Airforce keeping Skyhawks flying safely and more recently worked in Wellington as a mechanic for Stagecoach.

Phil Chapman has also joined the team, as a labourer and trainee operator. Phil had his 21st birthday recently, which Mexteds staff helped him celebrate at their Christmas function at the Westpac Stadium.

Sue, Steve and the Mexteds team wish you all a very happy and restful Christmas and look forward to working with you again in the New Year.