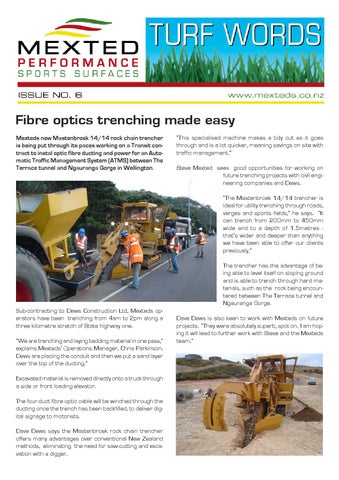 Fibre optics trenching made easy Mexteds new Mastenbroek 14/14 rock chain trencher is being put through its paces working on a Transit contract to instal optic fibre ducting and power for an Automatic Traffic Management System (ATMS) between The Terrace tunnel and Ngauranga Gorge in Wellington.

“This specialised machine makes a tidy cut as it goes through and is a lot quicker, meaning savings on site with traffic management.” Steve Mexted sees good opportunities for working on future trenching projects with civil engineering companies and Dews. “The Mastenbroek 14/14 trencher is ideal for utility trenching through roads, verges and sports fields,” he says. “It can trench from 200mm to 450mm wide and to a depth of 1.5metres that’s wider and deeper than anything we have been able to offer our clients previously.” The trencher has the advantage of being able to level itself on sloping ground and is able to trench through hard materials, such as the rock being encountered between The Terrace tunnel and Ngauranga Gorge.

Sub-contracting to Dews Construction Ltd, Mexteds operators have been trenching from 4am to 2pm along a three kilometre stretch of State highway one. “We are trenching and laying bedding material in one pass,“ explains Mexteds’ Operations Manager, Chris Parkinson. Dews are placing the conduit and then we put a sand layer over the top of the ducting.” Excavated material is removed directly onto a truck through a side or front loading elevator. The four-duct fibre optic cable will be winched through the ducting once the trench has been backfilled, to deliver digital signage to motorists. Dave Dews says the Mastenbroek rock chain trencher offers many advantages over conventional New Zealand methods, eliminating the need for saw-cutting and excavation with a digger.

Dave Dews is also keen to work with Mexteds on future projects. “They were absolutely superb, spot on. I am hoping it will lead to further work with Steve and the Mexteds team.”

Portable screener available for hire Mexteds has recently acquired an eighteen tonne Nordberg tracked portable screener which is available for hire. The screener is useful for recycling second grade soils, says Steve Mexted. “It can screen multiple products with multiple splits such as aggregates, soils, barks and our wicket clays. “It will speed up the processing of the larger volumes,” says Steve Mexted. The Nordberg screener is currently being used in the Manawatu for screening material from a quarry in to concrete aggregates and basecourses.

From trotting track to soccer pitch New life is being breathed into the former dog and trotting tracks at Hutt Park Raceway as they are transformed into two soccer fields and a practice area.

Working on the Hutt City Council project, Mexteds has been involved in the decompaction of the subgrade and placement of a 120mm layer of topsoil over the whole area.

Mexteds then installed an irrigation system on the No. 1 field using the trenchless plow method, to avoid disturbing the surface and bringing up stones and other debris followed by multiple directional sowing.

“We used deep primary vibra decompaction over the 3.3 hectares at 800mm centres and 700mm deep, then spread the topsoil using land levellers and the laser,” says Mexteds’ Contracts Manager, Paul

Hutt City Council’s Sports Grounds Assets Manager, Aaron Marsh, says the Council made a specific request to bring Mexteds in to do the work due to past experiences with the company.

“They are really good contractors who know what they are doing.” The park was seeded on a Friday just before Wellington’s long dry summer spell broke. “We had rains on Friday, Saturday and Sunday and now we are on the park without any ponding, so they have got their levels right and done a lot of decompaction. “All the inputs they have done were spot on,” says Marsh. Land levellers and the LB4 dual grade laser

Leaving the stones unturned “Leave no stone unturned” the saying goes, but Mexteds had the opposite challenge during decompaction work at Trentham racecourse recently. Trentham racecourse is on an old river bed, and stones and rocks were the last thing the racing club wanted brought to the surface during the decompaction process. Racecourse manager, Lyn Biddle says compaction is one of the major problems for race tracks. “We have to use so much machinery and when a horse gallops on the track each hoof has a tonne to a tonne and a half pressure and that causes a lot of compaction. It’s one of the things we are battling all the time.”

seen some of them working, but they are not quite as good as this one - the blades are wider and it does that little bit better job.” Mexteds decompacted 20 metres out from the main running rail around the track and the whole of the front straight, and also undersowed the area.

Mexteds were confident the TreMor was the right solution for the racing club’s compaction problem.

The next race meeting at Trentham was held four weeks later with no problems experienced.

Contracts Manager, Paul Pinfold says “The TreMor is ideal because it does not bring up rocks. There is an even surface heave and the track can be used straight away.”

Lyn Biddle says Trentham is one of a group of three race courses and he expects the TreMor decompactor to be used at Awapuni and Otaki as well.

The racing club management had seen the TreMor rotary decompactor in action during the NZ Sports Turf Conference last year and Lyn decided, with some trepidation, to give it a trial at Trentham. Lyn Biddle held his breath as the TreMor began work. “We were a little bit suspect about the damage that it may or may not do, but once we saw the machine operating it was tremendous. The machine does exactly the job we wanted it to do. “There are various types of machinery like it and I have

“We are also having a racecourse managers’ conference later this year and I will be bringing [the TreMor] to the fore. It would be useful for anyone who has a compaction problem, and particularly racecourses. “Mexteds are professionals, they did a good job. I am tremendously pleased with the results.” The Mexteds team is currently working with Gary Foskett, National Venue Inspector for New Zealand Thoroughbred Racing to organise a demonstration day of the TreMor and sand bander for the lower North Island.

Sign of the times If the game gets boring, take a look at our grass Readers of Turf Words will know that Mexteds plays an important part in keeping the green velvet sward at Wellington’s Westpac Stadium looking its best.

But just in case you need a reminder, we’ve added our name to the stadium’s billboards. Check it out next time the game’s not going your way.

Kicking for touch Mexteds entered the world of high performance elite sports sponsorship when they signed a one year shirt sponsorship deal with the well known local touch team “The Jandals”. The Jandals had a stella season finishing on a high with a run of five consecutive wins in the Porirua over 30s touch grade. “We would especially like to thank Steve for his kind generosity. We all had a great season with a lot of laughs and appreciate your help. Thanks a million.” - The Mighty Jandals

Welcome on board As our business continues to grow, so does our team. Mexteds welcomes on board Dave Charlton, who is currently familiarising himself with our specialised plant and equipment as a trainee operator. Dave comes to Mexteds from Wellington College where he was groundsman. “Dave has experience in the industry and local knowledge and we’re pleased to have him as part of the team,” says Steve Mexted.