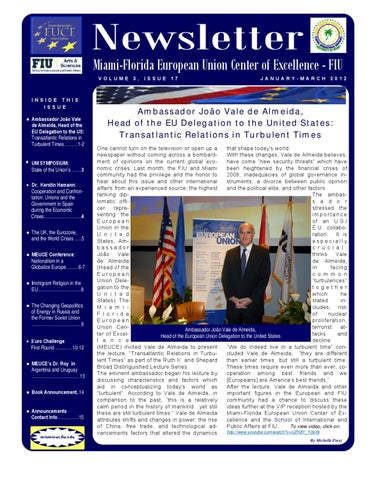 ● Ambassador João Vale de Almeida, Head of the EU Delegation to the US: Transatlantic Relations in Turbulent Times.……...1-2

Cooperation and Confrontation: Unions and the Government in Spain during the Economic Crises………….………....4

Ambassador João Vale de Almeida, Head of the EU Delegation to the United States: Transatlantic Relations in Turbulent Times that shape today’s world. One cannot turn on the television or open up a With these changes, Vale de Almeida believes, newspaper without coming across a bombardhave come “new security threats” which have ment of opinions on the current global ecobeen heightened by the financial crises of nomic crises. Last month, the FIU and Miami 2008, inadequacies of global governance incommunity had the privilege and the honor to struments, a divorce between public opinion hear about this issue and other international and the political elite, and other factors. affairs from an experienced source; the highest The ambasranking dips a d o r lomatic offistressed the cer repreimportance senting the of an U.S./ European E.U. collaboUnion in the ration. It is U n i t e d especially States, Amc r u c i a l , bassador thinks Vale João Vale de Almeida, de Almeida in facing (Head of the c o m m o n European “turbulences” Union Deletogether gation to the which he U n i t e d stated inStates). The cludes, risk M i a m i of nuclear F l o r i d a proliferation, European Union Centerrorist atAmbassador João Vale de Almeida, ter of Exceltacks and Head of the European Union Delegation to the United States decline. l e n c e “We do indeed live in a turbulent time” con(MEUCE) invited Vale de Almeida to present cluded Vale de Almeida, “they are different the lecture, “Transatlantic Relations in Turbuthan earlier times, but still a turbulent time. lent Times” as part of the Ruth K. and Shepard These times require even more than ever, coBroad Distinguished Lecture Series. operation among best friends and we The eminent ambassador began his lecture by discussing characteristics and factors which [Europeans] are America’s best friends.” After the lecture, Vale de Almeida and other aid in conceptualizing today’s world as important figures in the European and FIU “turbulent”. According to Vale de Almeida, in community had a chance to discuss these comparison to the past, “this is a relatively ideas further at the VIP reception hosted by the calm period in the history of mankind…yet still Miami-Florida European Union Center of Exthese are still turbulent times.” Vale de Almeida cellence and the School of International and attributes shifts and changes in power, the rise Public Affairs at FIU. of China, free trade, and technological adTo view video, click on: http://www.youtube.com/watch?v=UZH8Y_Y2eXk vancements factors that altered the dynamics By Michelle Perez