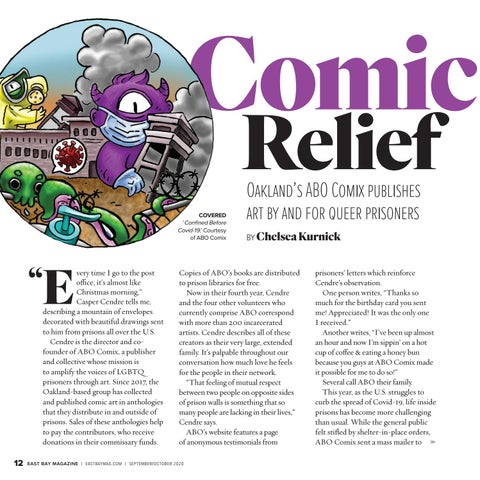 very time I go to the post office, it’s almost like Christmas morning,” Casper Cendre tells me, describing a mountain of envelopes decorated with beautiful drawings sent to him from prisons all over the U.S. Cendre is the director and cofounder of ABO Comix, a publisher and collective whose mission is to amplify the voices of LGBTQ prisoners through art. Since 2017, the Oakland-based group has collected and published comic art in anthologies that they distribute in and outside of prisons. Sales of these anthologies help to pay the contributors, who receive donations in their commissary funds.

Copies of ABO’s books are distributed to prison libraries for free. Now in their fourth year, Cendre and the four other volunteers who currently comprise ABO correspond with more than 200 incarcerated artists. Cendre describes all of these creators as their very large, extended family. It’s palpable throughout our conversation how much love he feels for the people in their network. “That feeling of mutual respect between two people on opposite sides of prison walls is something that so many people are lacking in their lives,” Cendre says. ABO’s website features a page of anonymous testimonials from

prisoners’ letters which reinforce Cendre’s observation. One person writes, “Thanks so much for the birthday card you sent me! Appreciated! It was the only one I received.” Another writes, “I’ve been up almost an hour and now I’m sippin’ on a hot cup of coffee &amp; eating a honey bun because you guys at ABO Comix made it possible for me to do so!” Several call ABO their family. This year, as the U.S. struggles to curb the spread of Covid-19, life inside prisons has become more challenging than usual. While the general public felt stifled by shelter-in-place orders, ABO Comix sent a mass mailer to