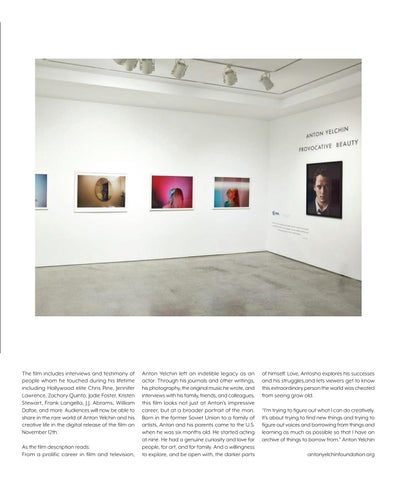 The film includes interviews and testimony of people whom he touched during his lifetime including Hollywood elite Chris Pine, Jennifer Lawrence, Zachary Quinto, Jodie Foster, Kristen Stewart, Frank Langella, J.J. Abrams, William Dafoe, and more. Audiences will now be able to share in the rare world of Anton Yelchin and his creative life in the digital release of the film on November 12th. As the film description reads: From a prolific career in film and television,

Anton Yelchin left an indelible legacy as an actor. Through his journals and other writings, his photography, the original music he wrote, and interviews with his family, friends, and colleagues, this film looks not just at Anton’s impressive career, but at a broader portrait of the man. Born in the former Soviet Union to a family of artists, Anton and his parents came to the U.S. when he was six months old. He started acting at nine. He had a genuine curiosity and love for people, for art, and for family. And a willingness to explore, and be open with, the darker parts

of himself. Love, Antosha explores his successes and his struggles,and lets viewers get to know this extraordinary person the world was cheated from seeing grow old. “I’m trying to figure out what I can do creatively. It’s about trying to find new things and trying to figure out voices and borrowing from things and learning as much as possible so that I have an archive of things to borrow from.” Anton Yelchin antonyelchinfoundation.org