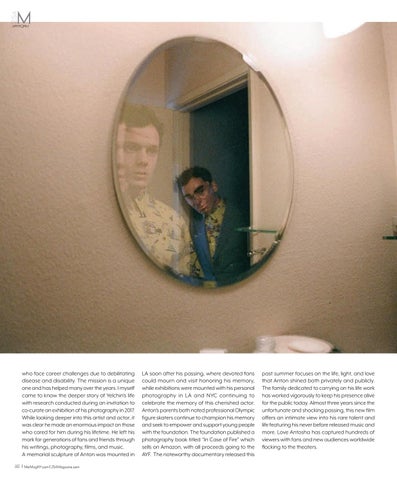 who face career challenges due to debilitating disease and disability. The mission is a unique one and has helped many over the years. I myself came to know the deeper story of Yelchin’s life with research conducted during an invitation to co-curate an exhibition of his photography in 2017. While looking deeper into this artist and actor, it was clear he made an enormous impact on those who cared for him during his lifetime. He left his mark for generations of fans and friends through his writings, photography, films, and music. A memorial sculpture of Anton was mounted in 92 | MetMagNY.com | 25AMagazine.com

LA soon after his passing, where devoted fans could mourn and visit honoring his memory, while exhibitions were mounted with his personal photography in LA and NYC continuing to celebrate the memory of this cherished actor. Anton’s parents both noted professional Olympic figure skaters continue to champion his memory and seek to empower and support young people with the foundation. The foundation published a photography book titled “In Case of Fire” which sells on Amazon, with all proceeds going to the AYF. The noteworthy documentary released this

past summer focuses on the life, light, and love that Anton shined both privately and publicly. The family dedicated to carrying on his life work has worked vigorously to keep his presence alive for the public today. Almost three years since the unfortunate and shocking passing, this new film offers an intimate view into his rare talent and life featuring his never before released music and more. Love Antosha has captured hundreds of viewers with fans and new audiences worldwide flocking to the theaters.