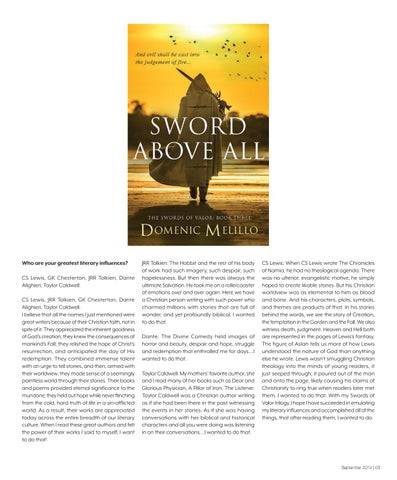 Who are your greatest literary influences? CS Lewis, GK Chesterton, JRR Tolkien, Dante Alighieri, Taylor Caldwell. CS Lewis, JRR Tolkien, GK Chesterton, Dante Alighieri, Taylor Caldwell. I believe that all the names I just mentioned were great writers because of their Christian faith, not in spite of it. They appreciated the inherent goodness of God’s creation; they knew the consequences of mankind’s Fall; they relished the hope of Christ’s resurrection, and anticipated the day of His redemption. They combined immense talent with an urge to tell stories, and then, armed with their worldview, they made sense of a seemingly pointless world through their stories. Their books and poems provided eternal significance to the mundane; they held out hope while never flinching from the cold, hard truth of life in a sin-afflicted world. As a result, their works are appreciated today across the entire breadth of our literary culture. When I read these great authors and felt the power of their works I said to myself, I want to do that!

JRR Tolkien: The Hobbit and the rest of his body of work had such imagery, such despair, such hopelessness. But then there was always the ultimate Salvation. He took me on a rollercoaster of emotions over and over again. Here we have a Christian person writing with such power who charmed millions with stories that are full of wonder, and yet profoundly biblical. I wanted to do that. Dante: The Divine Comedy held images of horror and beauty, despair and hope, struggle and redemption that enthralled me for days….I wanted to do that. Taylor Caldwell: My mothers’ favorite author, she and I read many of her books such as Dear and Glorious Physician, A Pillar of Iron, The Listener. Taylor Caldwell was a Christian author writing as if she had been there in the past witnessing the events in her stories. As if she was having conversations with her biblical and historical characters and all you were doing was listening in on their conversations….I wanted to do that.

CS Lewis: When CS Lewis wrote The Chronicles of Narnia, he had no theological agenda. There was no ulterior, evangelistic motive; he simply hoped to create likable stories. But his Christian worldview was as elemental to him as blood and bone. And his characters, plots, symbols, and themes are products of that. In his stories behind the words, we see the story of Creation, the temptation in the Garden and the Fall. We also witness death, judgment. Heaven and Hell both are represented in the pages of Lewis’s fantasy. The figure of Aslan tells us more of how Lewis understood the nature of God than anything else he wrote. Lewis wasn’t smuggling Christian theology into the minds of young readers, it just seeped through; it poured out of the man and onto the page, likely causing his claims of Christianity to ring true when readers later met them. I wanted to do that. With my Swords of Valor trilogy, I hope I have succeeded in emulating my literary influences and accomplished all of the things, that after reading them, I wanted to do.