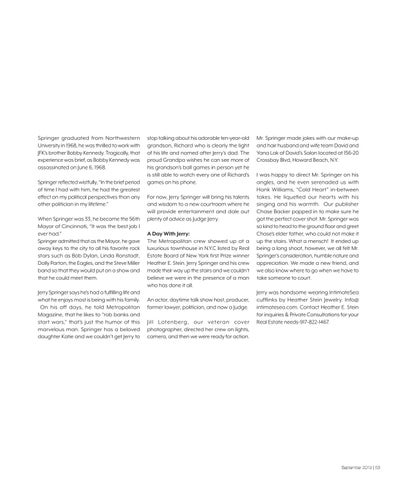 Springer graduated from Northwestern University in 1968, he was thrilled to work with JFK’s brother Bobby Kennedy. Tragically, that experience was brief, as Bobby Kennedy was assassinated on June 6, 1968. Springer reflected wistfully, “In the brief period of time I had with him, he had the greatest effect on my political perspectives than any other politician in my lifetime.” When Springer was 33, he became the 56th Mayor of Cincinnati, “It was the best job I ever had.” Springer admitted that as the Mayor, he gave away keys to the city to all his favorite rock stars such as Bob Dylan, Linda Ronstadt, Dolly Parton, the Eagles, and the Steve Miller band so that they would put on a show and that he could meet them. Jerry Springer says he’s had a fulfilling life and what he enjoys most is being with his family. On his off days, he told Metropolitan Magazine, that he likes to “rob banks and start wars,” that’s just the humor of this marvelous man. Springer has a beloved daughter Katie and we couldn’t get Jerry to

stop talking about his adorable ten-year-old grandson, Richard who is clearly the light of his life and named after Jerry’s dad. The proud Grandpa wishes he can see more of his grandson’s ball games in person yet he is still able to watch every one of Richard’s games on his phone. For now, Jerry Springer will bring his talents and wisdom to a new courtroom where he will provide entertainment and dole out plenty of advice as Judge Jerry. A Day With Jerry: The Metropolitan crew showed up at a luxurious townhouse in N.Y.C listed by Real Estate Board of New York first Prize winner Heather E. Stein. Jerry Springer and his crew made their way up the stairs and we couldn’t believe we were in the presence of a man who has done it all. An actor, daytime talk show host, producer, former lawyer, politician, and now a Judge. Jill Lotenberg, our veteran cover photographer, directed her crew on lights, camera, and then we were ready for action.

Mr. Springer made jokes with our make-up and hair husband and wife team David and Yana Lak of David’s Salon located at 156-20 Crossbay Blvd, Howard Beach, N.Y. I was happy to direct Mr. Springer on his angles, and he even serenaded us with Hank Williams, “Cold Heart” in-between takes. He liquefied our hearts with his singing and his warmth. Our publisher Chase Backer popped in to make sure he got the perfect cover shot. Mr. Springer was so kind to head to the ground floor and greet Chase’s elder father, who could not make it up the stairs. What a mensch! It ended up being a long shoot, however, we all felt Mr. Springer’s consideration, humble nature and appreciation. We made a new friend, and we also know where to go when we have to take someone to court. Jerry was handsome wearing IntimateSea cufflinks by Heather Stein Jewelry. Info@ intimatesea.com. Contact Heather E. Stein for inquiries & Private Consultations for your Real Estate needs-917-822-1467.