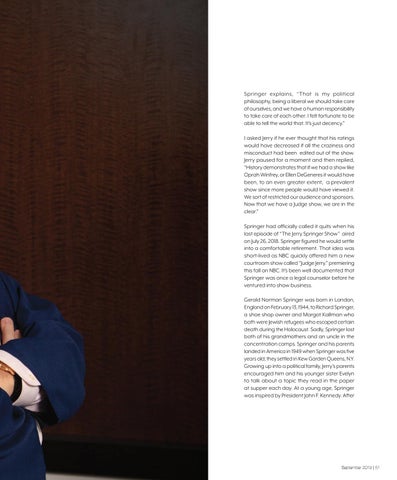 Springer explains, “That is my political philosophy, being a liberal we should take care of ourselves, and we have a human responsibility to take care of each other. I felt fortunate to be able to tell the world that. It’s just decency.” I asked Jerry if he ever thought that his ratings would have decreased if all the craziness and misconduct had been edited out of the show. Jerry paused for a moment and then replied, “History demonstrates that if we had a show like Oprah Winfrey, or Ellen DeGeneres it would have been, to an even greater extent, a prevalent show since more people would have viewed it. We sort of restricted our audience and sponsors. Now that we have a Judge show, we are in the clear.” Springer had officially called it quits when his last episode of “The Jerry Springer Show” aired on July 26, 2018. Springer figured he would settle into a comfortable retirement. That idea was short-lived as NBC quickly offered him a new courtroom show called “Judge Jerry.” premiering this fall on NBC. It’s been well documented that Springer was once a legal counselor before he ventured into show business. Gerald Norman Springer was born in London, England on February 13, 1944, to Richard Springer, a shoe shop owner and Margot Kallman who both were Jewish refugees who escaped certain death during the Holocaust. Sadly, Springer lost both of his grandmothers and an uncle in the concentration camps. Springer and his parents landed in America in 1949 when Springer was five years old; they settled in Kew Garden Queens, N.Y. Growing up into a political family, Jerry’s parents encouraged him and his younger sister Evelyn to talk about a topic they read in the paper at supper each day. At a young age, Springer was inspired by President John F. Kennedy. After