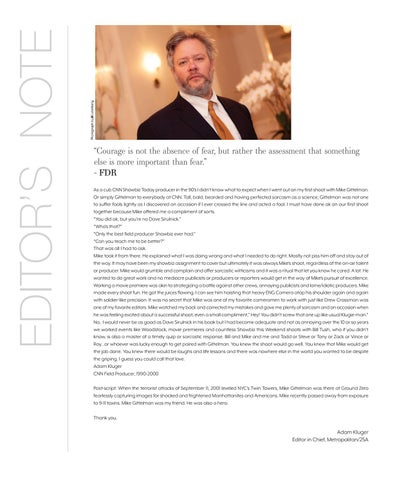 “Courage is not the absence of fear, but rather the assessment that something else is more important than fear.” - FDR As a cub CNN Showbiz Today producer in the 90’s I didn’t know what to expect when I went out on my first shoot with Mike Gittelman. Or simply Gittelman to everybody at CNN. Tall, bald, bearded and having perfected sarcasm as a science, Gittelman was not one to suffer fools lightly as I discovered on occasion if I ever crossed the line and acted a fool. I must have done ok on our first shoot together because Mike offered me a compliment of sorts. “You did ok, but you’re no Dave Sirulnick.” “Who’s that?” “Only the best field producer Showbiz ever had.” “Can you teach me to be better?” That was all I had to ask. Mike took it from there. He explained what I was doing wrong and what I needed to do right. Mostly not piss him off and stay out of the way. It may have been my showbiz assignment to cover but ultimately it was always Mike’s shoot, regardless of the on-air talent or producer. Mike would grumble and complain and offer sarcastic witticisms and it was a ritual that let you know he cared. A lot. He wanted to do great work and no mediocre publicists or producers or reporters would get in the way of Mike’s pursuit of excellence. Working a movie premiere was akin to strategizing a battle against other crews, annoying publicists and lame/idiotic producers. Mike made every shoot fun. He got the juices flowing. I can see him hoisting that heavy ENG Camera atop his shoulder again and again with soldier-like precision. It was no secret that Mike was one of my favorite cameramen to work with just like Drew Crossman was one of my favorite editors. Mike watched my back and corrected my mistakes and gave me plenty of sarcasm and on occasion when he was feeling excited about a successful shoot, even a small compliment,” Hey! You didn’t screw that one up like usual Klugie-man.” No, I would never be as good as Dave Sirulnick in his book but I had become adequate and not as annoying over the 10 or so years we worked events like Woodstock, movie premieres and countless Showbiz this Weekend shoots with Bill Tush, who if you didn’t know, is also a master of a timely quip or sarcastic response. Bill and Mike and me and Todd or Steve or Tony or Zack or Vince or Roy...or whoever was lucky enough to get paired with Gittelman. You knew the shoot would go well. You knew that Mike would get the job done. You knew there would be laughs and life lessons and there was nowhere else in the world you wanted to be despite the griping. I guess you could call that love. Adam Kluger CNN Field Producer, 1990-2000 Post-script: When the terrorist attacks of September 11, 2001 leveled NYC’s Twin Towers, Mike Gittelman was there at Ground Zero fearlessly capturing images for shocked and frightened Manhattanites and Americans. Mike recently passed away from exposure to 9-11 toxins. Mike Gittelman was my friend. He was also a hero. Thank you.