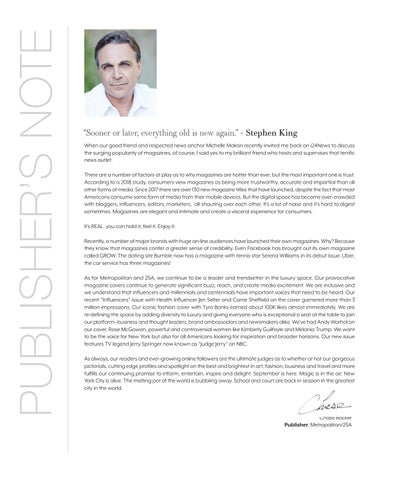 “Sooner or later, everything old is new again.” - Stephen King When our good friend and respected news anchor Michelle Makori recently invited me back on i24News to discuss the surging popularity of magazines, of course, I said yes to my brilliant friend who hosts and supervises that terrific news outlet. There are a number of factors at play as to why magazines are hotter than ever, but the most important one is trust. According to a 2018 study, consumers view magazines as being more trustworthy, accurate and impartial than all other forms of media. Since 2017 there are over 130 new magazine titles that have launched, despite the fact that most Americans consume some form of media from their mobile devices. But the digital space has become over-crowded with bloggers, influencers, editors, marketers, all shouting over each other. It’s a lot of noise and it’s hard to digest sometimes. Magazines are elegant and intimate and create a visceral experience for consumers. It’s REAL. you can hold it, feel it. Enjoy it. Recently, a number of major brands with huge on-line audiences have launched their own magazines. Why? Because they know that magazines confer a greater sense of credibility. Even Facebook has brought out its own magazine called GROW. The dating site Bumble now has a magazine with tennis star Serena Williams in its debut issue. Uber, the car service has three magazines! As for Metropolitan and 25A, we continue to be a leader and trendsetter in the luxury space. Our provocative magazine covers continue to generate significant buzz, reach, and create media excitement. We are inclusive and we understand that influencers and millennials and centennials have important voices that need to be heard. Our recent “Influencers” issue with Health Influencer Jen Selter and Carrie Sheffield on the cover garnered more than 3 million impressions. Our iconic fashion cover with Tyra Banks earned about 100K likes almost immediately. We are re-defining the space by adding diversity to luxury and giving everyone who is exceptional a seat at the table to join our platform--business and thought leaders, brand ambassadors and newsmakers alike. We’ve had Andy Warhol on our cover, Rose McGowan, powerful and controversial women like Kimberly Guilfoyle and Melania Trump. We want to be the voice for New York but also for all Americans looking for inspiration and broader horizons. Our new issue features TV legend Jerry Springer now known as “Judge Jerry” on NBC. As always, our readers and ever-growing online followers are the ultimate judges as to whether or not our gorgeous pictorials, cutting edge profiles and spotlight on the best and brightest in art, fashion, business and travel and more fulfills our continuing promise to inform, entertain, inspire and delight. September is here. Magic is in the air. New York City is alive. The melting pot of the world is bubbling away. School and court are back in session in the greatest city in the world.