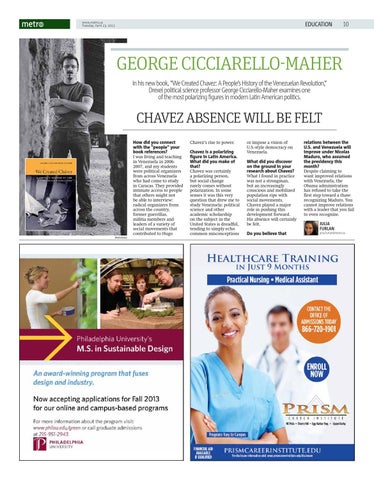 GEORGE CICCIARELLO-MAHER In his new book, “We Created Chavez: A People’s History of the Venezuelan Revolution,” Drexel political science professor George Cicciarello-Maher examines one of the most polarizing ﬁgures in modern Latin American politics.

CHAVEZ ABSENCE WILL BE FELT

How did you connect with the “people” your book references? I was living and teaching in Venezuela in 20062007, and my students were political organizers from across Venezuela who had come to study in Caracas. They provided intimate access to people that others might not be able to interview: radical organizers from across the country, former guerrillas, militia members and leaders of a variety of social movements that contributed to Hugo

Chavez’s rise to power. Chavez is a polarizing ﬁgure in Latin America. What did you make of that? Chavez was certainly a polarizing person, but social change rarely comes without polarization. In some senses it was this very question that drew me to study Venezuela: political science and other academic scholarship on the subject in the United States is dreadful, tending to simply echo common misconceptions

or impose a vision of U.S.-style democracy on Venezuela. What did you discover on the ground in your research about Chavez? What I found in practice was not a strongman, but an increasingly conscious and mobilized population ripe with social movements. Chavez played a major role in pushing this development forward. His absence will certainly be felt. Do you believe that

relations between the U.S. and Venezuela will improve under Nicolas Maduro, who assumed the presidency this month? Despite claiming to want improved relations with Venezuela, the Obama administration has refused to take the first step toward a thaw: recognizing Maduro. You cannot improve relations with a leader that you fail to even recognize.