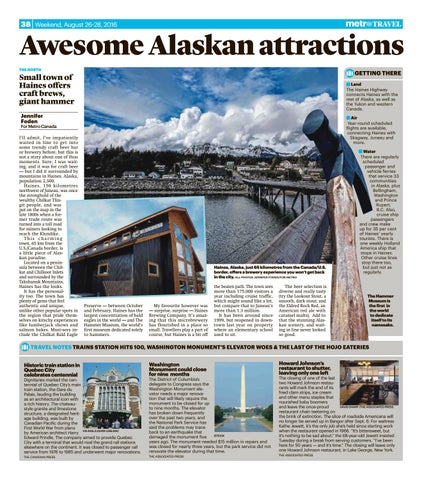 Land The Haines Highway connects Haines with the rest of Alaska, as well as the Yukon and western Canada.

For Metro Canada I’ll admit, I’ve impatiently waited in line to get into some trendy craft beer bar or brewery before, but this is not a story about one of those moments. Sure, I was waiting, and it was for craft beer — but I did it surrounded by mountains in Haines, Alaska, population 2,500. Haines, 150 kilometres northwest of Juneau, was once the stronghold of the wealthy Chilkat Tlingit people, and was put on the map in the late 1800s when a former trade route was turned into a toll road for miners looking to reach the Klondike. This charming town, 65 km from the U.S./Canada border, is a little piece of Alaskan paradise. Located on a peninsula between the Chilkat and Chilkoot Inlets and surrounded by the Takshanuk Mountains, Haines has the looks. It has the personality too: The town has plenty of gems that feel authentic and unique, unlike other popular spots in the region that pride themselves on kitschy experiences like lumberjack shows and salmon bakes. Must-sees include the Chilkat Bald Eagle

Haines, Alaska, just 65 kilometres from the Canada/U.S. border, offers a brewery experience you won’t get back in the city. All photos Jennifer Foden/For Metro

Preserve — between October and February, Haines has the largest concentration of bald eagles in the world — and The Hammer Museum, the world’s first museum dedicated solely to hammers.

My favourite however was — surprise, surprise — Haines Brewing Company. It’s amazing that this microbrewery has flourished in a place so small. Travellers play a part of course, but Haines is a bit off

the beaten path. The town sees more than 175,000 visitors a year including cruise traffic, which might sound like a lot, but compare that to Juneau’s more than 1.3 million. It has been around since 1999, but reopened in downtown last year on property where an elementary school used to sit.

The beer selection is diverse and really tasty (try the Lookout Stout, a smooth, dark stout; and the Eldred Rock Red, an American red ale with caramel malts). Add to that the stunning Alaskan scenery, and waiting in line never looked so good.

Water There are regularly scheduled passenger and vehicle ferries that service 33 communities in Alaska, plus Bellingham, Washington and Prince Rupert, B.C. Also, cruise ship passengers and crew make up for 35 per cent of Haines’ yearly tourists. There is one weekly Holland America ship that stops in Haines. Other cruise lines stop there too, but just not as regularly.

The Hammer Museum is the first in the world to dedicate itself to its namesake.

Dignitaries marked the centennial of Quebec City’s main train station, the Gare du Palais, lauding the building as an architectural icon with a rich history. The chateaustyle granite and limestone structure, a designated heritage building, was built by Canadian Pacific during the First World War from plans Via Rail/Louise LeBlanc by American architect Harry Edward Prindle. The company aimed to provide Quebec City with a terminal that would rival the grand rail stations elsewhere on the continent. It was closed to passenger rail service from 1976 to 1985 and underwent major renovations.

The District of Columbia’s delegate to Congress says the Washington Monument elevator needs a major renovation that will likely require the monument to be closed for up to nine months. The elevator has broken down frequently over the past two years, and the National Park Service has said the problems may trace back to an earthquake that Istock damaged the monument five years ago. The monument needed $15 million in repairs and was closed for nearly three years, but the park service did not renovate the elevator during that time.

Howard Johnson’s restaurant to shutter, leaving only one left

The closing of one of the last two Howard Johnson restaurants will mark the end of its fried clam strips, ice cream and other menu staples that nourished baby boomers David Sharp /the associated press and leave the once-proud restaurant chain teetering on the brink of extinction. The slice of roadside Americana will no longer be served up in Bangor after Sept. 6. For waitress Kathe Jewett, it’s the only job she’s held since starting work when the restaurant opened in 1966. “It’s bittersweet, but it’s nothing to be sad about,” the 68-year-old Jewett insisted Tuesday during a break from serving customers. “I’ve been here for 50 years — and it’s time.” The closing will leave only one Howard Johnson restaurant, in Lake George, New York. The associated press