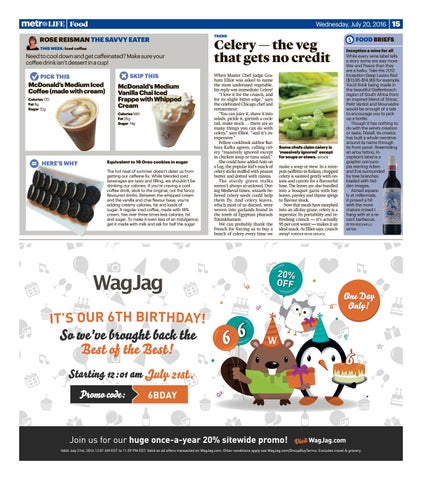 Need to cool down and get caffeinated? Make sure your coffee drink isn’t dessert in a cup! SKIP THIS

Equivalent to 16 Oreo cookies in sugar The hot heat of summer doesn’t deter us from getting our caffeine fix. While blended iced beverages are tasty and filling, we shouldn’t be drinking our calories. If you’re craving a cool coffee drink, stick to the original, not the fancy flavoured drinks. Between the whipped cream and the vanilla and chai flavour base, you’re adding creamy calories, fat and loads of sugar. A regular iced coffee, made with 18% cream, has over three times less calories, fat and sugar. To make it even less of an indulgence, get it made with milk and ask for half the sugar.

Celery — the veg that gets no credit When Master Chef judge Graham Elliot was asked to name the most underused vegetable, his reply was immediate: Celery! “I love it for the crunch, and for its slight bitter edge,” says the celebrated Chicago chef and restaurateur. “You can juice it, shave it into salads, pickle it, garnish a cocktail, make stock … there are so many things you can do with celery,” says Elliot, “and it’s inexpensive.” Fellow cookbook author Barbara Kafka agrees, calling celery “massively ignored except in chicken soup or tuna salad.” She could have added Ants on a Log, the popular kid’s snack of celery sticks stuffed with peanut butter and dotted with raisins. The sturdy green stalks weren’t always so unloved. During Medieval times, wizards believed celery seeds could help them fly. And celery leaves, which most of us discard, were woven into garlands found in the tomb of Egyptian pharaoh Tutankhamen. We can probably thank the French for forcing us to buy a bunch of celery every time we

Some chefs claim celery is ‘massively ignored’ except for soups or stews. istock

make a soup or stew. In a mirepoix (soffritto in Italian), chopped celery is sautéed gently with onions and carrots for a flavourful base. The leaves are also bundled into a bouquet garni with bay leaves, parsley and thyme sprigs to flavour stock. Now that meals have morphed into an all-day graze, celery is a superstar. Its portability and refreshing crunch — it’s actually 95 per cent water — makes it an ideal snack. As Elliot says, crunch away! torstar news service

FOOD BRIEFS Inception a wine for all While every wine label tells a story some are way more War and Peace than they are a haiku. Take the 2012 Inception Deep Layers Red ($13.95-$14.99) for example. You’d think being made in the beautiful Stellenbosch region of South Africa from an inspired blend of Shiraz, Petit Verdot and Mourvèdre would be enough of a tale to encourage you to pick up a bottle. Though it has nothing to do with the wine’s creation or taste; Distell, its creator, has built a whole narrative around its name through its front panel. Resembling an artsy tattoo, Inception’s label is a graphic cornucopia starring Adam and Eve surrounded by tree branches loaded with hidden images. Aimed squarely at millennials, it proved a hit with the more mature crowd I hang with at a recent barbecue. peter rockwell/ metro

Join us for our huge once-a-year 20% sitewide promo!