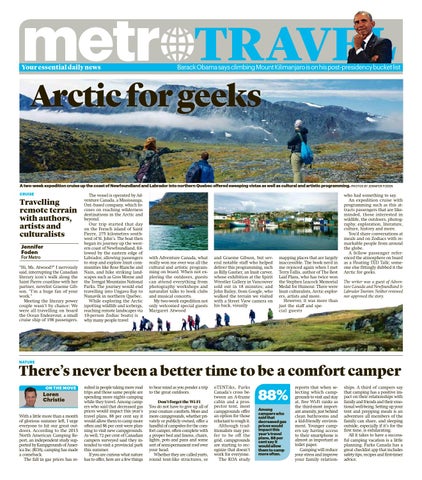 Arctic for geeks A two-week expedition cruise up the coast of Newfoundland and Labrador into northern Quebec offered sweeping vistas as well as cultural and artistic programming. PHOTOS BY JENNIFER FODEN CRUISE

“Hi, Ms. Atwood?” I nervously said, interrupting the Canadian literary icon’s walk along the Saint Pierre coastline with her partner, novelist Graeme Gibson. “I’m a huge fan of your work.” Meeting the literary power couple wasn’t by chance: We were all travelling on board the Ocean Endeavour, a small cruise ship of 198 passengers.

The vessel is operated by Adventure Canada, a Mississauga, Ont.-based company, which focuses on reaching wilderness destinations in the Arctic and beyond. Our trip started that day on the French island of Saint Pierre, 275 kilometres southwest of St. John’s. The boat then began its journey up the western coast of Newfoundland, followed by the eastern edge of Labrador, allowing passengers to stop and explore Inuit communities like Rose Blanche and Nain, and hike striking landscapes such as Gros Morne and the Torngat Mountains National Parks. The journey would end travelling into Ungava Bay to Nunavik in northern Quebec. While exploring the Arctic (spotting wildlife and icebergs, reaching remote landscapes via 10-person Zodiac boats) is why many people travel

with Adventure Canada, what really won me over was all the cultural and artistic programming on board. When not exploring the outdoors, guests can attend everything from photography workshops and naturalist talks to book clubs and musical concerts. My two-week expedition not only welcomed special guests Margaret Atwood

and Graeme Gibson, but several notable staff who helped deliver this programming, such as Billy Gautier, an Inuit carver, whose exhibition at the Spirit Wrestler Gallery in Vancouver sold out in 18 minutes; and John Bailey, from Google, who walked the terrain we visited with a Street View camera on his back, visually

mapping places that are largely inaccessible. The book nerd in me rejoiced again when I met Terry Fallis, author of The Best Laid Plans, who has twice won the Stephen Leacock Memorial Medal for Humour. There were Inuit culturalists, Arctic explorers, artists and more. However, it was more than just the staff and special guests

who had something to say. An expedition cruise with programming such as this attracts passengers that are likeminded, those interested in wildlife, the outdoors, photography, exploration, literature, culture, history and more. You’d share conversations at meals and on Zodiacs with remarkable people from around the globe. A fellow passenger referenced the atmosphere on board as a Floating TED Talk; someone else fittingly dubbed it the Arctic for geeks. The writer was a guest of Adventure Canada and Newfoundland &amp; Labrador Tourism. Neither reviewed nor approved the story.

With a little more than a month of glorious summer left, I urge everyone to hit our great outdoors. According to the 2015 North American Camping Report, an independent study supported by Kampgrounds of America Inc. (KOA), camping has made a comeback. The fall in gas prices has re-

sulted in people taking more road trips and those same people are spending more nights camping while they travel. Among campers who said that decreased gas prices would impact this year’s travel plans, 88 per cent say it would allow them to camp more often and 86 per cent were planning to visit new campgrounds. As well, 72 per cent of Canadian campers surveyed said they intended to visit a provincial park this summer. If you are curious what nature has to offer, here are a few things

to bear mind as you ponder a trip to the great outdoors. Don’t forget the Wi-Fi You do not have to give up all of your creature comforts. More and more campgrounds, whether privately or publicly owned, offer a handful of campsites for the comfort camper, often complete with a proper bed and linens, chairs, lights, pots and pans and some sort of semi-permanent roof over your head. Whether they are called yurts, round tent-like structures, or

oTENTiks, Parks Canada’s cross between an A-frame cabin and a prospector tent, most campgrounds offer an option for those reluctant to rough it. Although traditionalists may prefer to be off the grid, campgrounds are starting to recognize that doesn’t work for everyone. The KOA study

88% Among campers who said that decreased gas prices would impact this year’s travel plans, 88 per cent say it would allow them to camp more often.

reports that when selecting which campgrounds to visit and stay at, free Wi-Fi ranks as the third-most important amenity, just behind clean bathrooms and a kid-friendly environment. Younger campers say having access to their smartphone is almost as important as toilet paper. Camping will reduce your stress and improve your family relation-

ships. A third of campers say that camping has a positive impact on their relationships with family and friends and their emotional well-being. Setting up your tent and prepping meals is an adventure all members of the family can share, and sleeping outside, especially if it’s for the first time, is exhilarating. All it takes to have a successful camping vacation is a little planning. Parks Canada has a great checklist app that includes safety tips, recipes and first-timer advice.