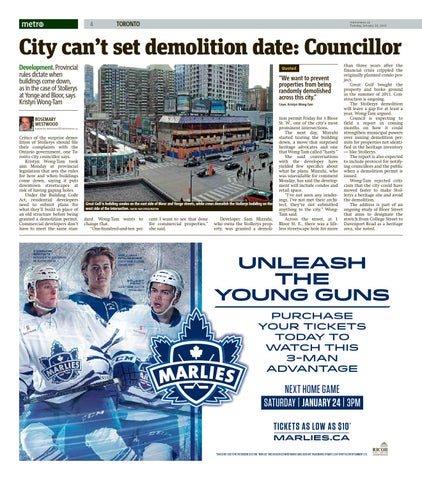 “We want to prevent properties from being randomly demolished across this city.” Coun. Kristyn Wong-Tam

Critics of the surprise demolition of Stollerys should file their complaints with the Ontario government, one Toronto city councillor says. Kristyn Wong-Tam took aim Monday at provincial legislation that sets the rules for how and when buildings come down, saying it puts downtown streetscapes at risk of having gaping holes. Under the Building Code Act, residential developers need to submit plans for what they’ll build in place of an old structure before being granted a demolition permit. Commercial developers don’t have to meet the same stan-

Great Gulf is building condos on the east side of Bloor and Yonge streets, while crews demolish the Stollerys building on the west side of the intersection. David Van Dyke/Metro

dard. Wong-Tam wants to change that. “One-hundred-and-ten per

cent I want to see that done for commercial properties,” she said.

Developer Sam Mizrahi, who owns the Stollerys property, was granted a demoli-

tion permit Friday for 1 Bloor St. W., one of the city’s most prominent intersections. The next day, Mizrahi started tearing the building down, a move that surprised heritage advocates and one that Wong-Tam called “hasty.” She said conversations with the developer have yielded few specifics about what he plans. Mizrahi, who was unavailable for comment Monday, has said the development will include condos and retail space. “I’ve not seen any renderings, I’ve not met their architect, they’ve not submitted anything to the city,” WongTam said. Across the street, at 1 Bloor St. E., there was a lifeless streetscape hole for more

than three years after the financial crisis crippled the originally planned condo project. Great Gulf bought the property and broke ground in the summer of 2011. Construction is ongoing. The Stollerys demolition will leave a gap for at least a year, Wong-Tam argued. Council is expecting to field a report in coming months on how it could strengthen municipal powers over issuing demolition permits for properties not identified in the heritage inventory — like Stollerys. The report is also expected to include protocol for notifying councillors and the public when a demolition permit is issued. Wong-Tam rejected criticism that the city could have moved faster to make Stollerys a heritage site and avoid the demolition. The address is part of an ongoing study of Bloor Street that aims to designate the stretch from College Street to Davenport Road as a heritage area, she noted.

NEXT HOME GAME SATURDAY | JANUARY 24 | 3PM TICKETS AS LOW AS $10 * MARLIES.CA *BASED ON TICKETS IN THE ENDZONE SECTION. “MARLIES” AND ASSOCIATED WORD MARKS AND LOGOS ARE TRADEMARKS OF MAPLE LEAF SPORTS & ENTERTAINMENT LTD.