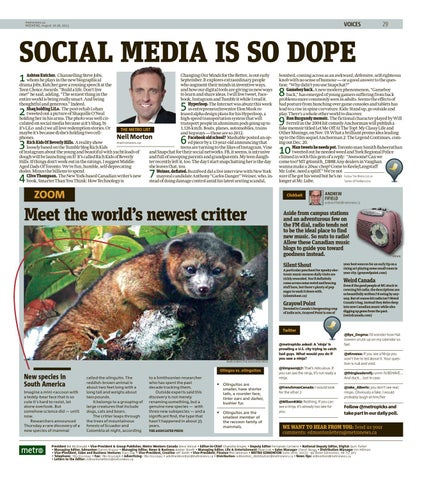 Channelling Steve Jobs, Changing Our Minds for the Better, is out early whom he plays in the new biographical September. It explores extraordinary people drama Jobs, Kutcher gave a rousing speech at the who augment their minds in inventive ways, Teen Choice Awards. “Build a life. Don’t live and how our digital tools are giving us new ways one!” he said, adding, “The sexiest thing in the to learn and share ideas. I will live tweet, Faceentire world is being really smart. And being book, Instagram and Tumblr it while I read it. thoughtful and generous.” Indeed. Hyperloop. The Internet was abuzz this week Shaq holding LiLo. The post-rehab Lohan as entrepreneur/inventor Elon Musk retweeted out a picture of Shaquille O’Neal leased alpha design plans for his Hyperloop, a holding her in his arms. The photo was well cirhigh-speed transportation system that will culated on social media because a) it’s Shaq, b) transport people in aluminum pods going up to it’s LiLo and c) we all love redemption stories. Or 1,126 km/h. Boats, planes, automobiles, trains THE METRO LIST maybe it’s because d) she’s holding two celland Segways — those are so 2012. phones. Neil Morton Facebook old school? Mashable posted an oped piece by a 13-year-old announcing that Rich Kids Of Beverly Hills. A reality show metronews.ca teens are turning to the likes of Instagram, Vine loosely based on the Tumblr blog Rich Kids and Snapchat for their social networks. FB, it seems, is intrusive of Instagram about the young and beautiful with yacht-loads of and full of snooping parents and grandparents. My teen daughdough will be launching on E! It’s called Rich Kids of Beverly ter recently left it, too. The day I start snapchatting her is the day Hills. If things don’t work out in the ratings, I suggest Middleshe leaves that, too. Aged Dads Of Toronto. We’re fun, humble, self-deprecating dudes. Minus the billions to spend. Weiner, deflated. BuzzFeed did a live interview with New York Clive Thompson. The New York-based Canadian writer’s new mayoral candidate Anthony “Carlos Danger” Weiner, who, inbook, Smarter Than You Think: How Technology is stead of doing damage control amid his latest sexting scandal,

bombed, coming across as an awkward, defensive, self-righteous knob with no sense of humour — or a good answer to the question: “Why didn’t you use Snapchat?” Gameboy back. A new modern phenomenon, “Gameboy back,” has emerged of young gamers suffering from back problems more commonly seen in adults. Seems the effects of bad posture from hunching over game consoles and tablets has lead to a rise in spine curvature. Kids: Stand up, go outside and play. There’s a whole other world to discover. Ron Burgundy memoir. The fictional character played by Will Ferrell in the 2004 hit comedy Anchorman will publish a fake memoir titled Let Me Off At The Top!: My Classy Life and Other Musings, on Nov. 19. What a brilliant promo idea leading up to the film sequel Anchorman 2: The Legend Continues, coming out Dec. 20. Man tweets he needs pot. Toronto man Sunith Baheerathan tweeted out he needed weed and York Regional Police chimed in with this gem of a reply: “Awesome! Can we come too? MT @Sunith_DB8R Any dealers in Vaughan wanna make a 20sac chop? Come to Keele/Langstaff Mr. Lube, need a spliff.” We’re not sure if he got his weed but he’s no Follow The Metro List on longer at Mr. Lube. Twitter @TheMetroList

Aside from campus stations and an adventurous few on the FM dial, radio tends not to be the ideal place to find new music. So nuts to radio! Allow these Canadian music blogs to guide you toward goodness instead. Silent Shout

A particular penchant for spooky electronic music ensures daily visits are richly rewarded. You’ll definitely come across some weird and bracing stuff here, but there’s plenty of pop sugar to wash it down with. (silentshout.ca)

Devoted to Canada’s burgeoning crop of indie acts, Grayowl Point is one of

New species in South America Imagine a mini-raccoon with a teddy-bear face that is so cute it’s hard to resist, let alone overlook. But somehow science did — until now. Researchers announced Thursday a rare discovery of a new species of mammal

called the olinguito. The reddish-brown animal is about two feet long with a long tail and weighs about two pounds. It belongs to a grouping of large creatures that include dogs, cats and bears. The critter leaps through the trees of mountainous forests of Ecuador and Colombia at night, according

to a Smithsonian researcher who has spent the past decade tracking them. Outside experts said this discovery is not merely renaming something, but a genuine new species — with three new subspecies — and a significant find, the type that hasn’t happened in about 35 years. THE ASSOCIATED PRESS

• Olinguitos are smaller, have shorter tails, a rounder face, tinier ears and darker, bushier fur. • Olinguitos are the smallest member of the raccoon family of mammals.

@metropicks asked: A ‘ninja’ is prowling a U.S. city trying to catch bad guys. What would you do if you saw a ninja? @Simpson957: That’s ridiculous. If you can see the ninja, it’s not really a ninja. @FrenchmanCanada: I would look for the other 2 @WilsonKM2: Nothing. If you can see a ninja, it’s already too late for you.

your best sources for an early tip on a rising act playing some small room in your city. (grayowlpoint.com)

Even if the good people at WC stuck to covering hit radio, the descriptions are so beautifully written I’d swing by anyway. But of course hit radio isn’t Weird Canada’s bag. Instead they delve deep into new Canadian music while also digging up gems from the past. (weirdcanada.com)

@Bye_Dogma: I’d wonder how Halloween snuck up on my calendar so fast. @xKnoxxx: If you see a Ninja you won’t live to tell about it. Your question is null and void. @thingleaderof5: umm I’d BEHAVE... And duck... Just in case. @Jake_Alberts: you don’t see real ninjas. Obviously a fake. I would probably laugh at him/her

Follow @metropicks and take part in our daily poll.

WE WANT TO HEAR FROM YOU: Send us your comments: edmontonletters@metronews.ca