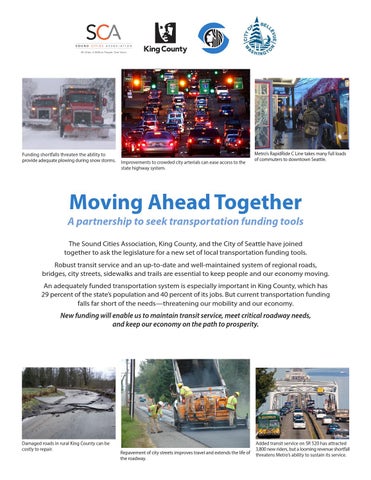 Improvements to crowded city arterials can ease access to the state highway system.

A partnership to seek transportation funding tools The Sound Cities Association, King County, and the City of Seattle have joined together to ask the legislature for a new set of local transportation funding tools. Robust transit service and an up-to-date and well-maintained system of regional roads, bridges, city streets, sidewalks and trails are essential to keep people and our economy moving. An adequately funded transportation system is especially important in King County, which has 29 percent of the state’s population and 40 percent of its jobs. But current transportation funding falls far short of the needs—threatening our mobility and our economy. New funding will enable us to maintain transit service, meet critical roadway needs,   and keep our economy on the path to prosperity.

Damaged roads in rural King County can be costly to repair.

Repavement of city streets improves travel and extends the life of the roadway.

TRANSIT:  Funding is critical to maintain service, get people to jobs, schools King County Metro Transit delivered over 115 million passenger trips in 2012, and ridership is expected to grow. Metro’s revenue from sales tax, which makes up about 60 percent of its operating funds, has dropped steeply. King County has taken many actions to narrow the budget gap, including adopting a temporary congestion reduction charge that raises about $25 million a year but expires in mid 2014. Metro faces a $75 million ongoing annual revenue shortfall. Without new funding, service will be cut by about 17 percent beginning in fall 2014. A reduction of that magnitude would exceed the amount of service Metro adds for commuters during weekday peak periods. Service deletions, reductions or revisions would affect about 70 percent of Metro’s routes. Riders directly affected by the changes could lose some or all service and might have to walk farther, wait longer, or transfer more. Riders throughout the Metro system might experience more-crowded and less-reliable buses—­or be left at the curb as full buses pass them by. Our economy would feel the impact as well. Businesses rely on Metro to get their employees to work; more than 1,500 companies provide bus passes to their employees. More than half of Metro’s passengers are commuters. Traffic congestion would get worse. Metro’s current service level keeps about 175,000 cars off our roads every

weekday. Public transportation yields more than $300 million per year in time and fuel savings for drivers*. Preserving Metro’s role in reducing congestion is critical — especially during the region’s major construction projects on SR 520, I-90, I-405 and SR 99. The proposed funding package would generate $85 million per year for transit, enabling Metro to: • Continue supporting economic growth by preserving the current overall level of service. • Make modest investments in new service where it’s needed most. Although the proposed funding would not enable Metro to fully meet the needs of underserved corridors or growing centers, it would provide for some modest service additions. *Source: Texas Transportation Institute

Facing a $1.2 billion shortfall for 2009-2015, Metro has been cutting costs, raising revenue, finding new efficiencies Metro and King County leaders have taken many actions to cut costs and increase revenue, yielding ongoing benefits. Some temporary actions, such as the use of reserves, will be exhausted after 2013.

The mechanisms for funding roads haven’t been updated in 25 years and they no longer work. Additional funding is critical to maintain existing transportation infrastructure in a safe and usable state. We estimate a total unfunded need of $4.9 billion for roadways and bridges in King County over the next six years. The proposed funding package would generate $105 million annually for cities, to be distributed on the basis of population and used for the transportation needs they determine are most important. It would generate $20 million per year for King County Road Services. This funding would enable cities and the county to:

Cities maintain 5,500 miles of streets plus bridges, sidewalks, drainage systems, traffic signals and trails. Existing facilities are aging. Revenue sources currently available to cities Storm damage on Holmes Point Drive NE, Kirkland. • Repave the heaviest-volume roads. are not keeping pace with the costs • Rehab or replace bridges that otherwise would have of replacement and expansion to meet growth. to be closed. King County Road Services is responsible for about 1,500 miles of county roads that carry more than 1 million trips • Improve the safety of city and county roads. per day, 180 bridges, culverts, and other transportation • Improve flooding/stormwater management. infrastructure. This system has some of the oldest roads • Widen roads and improve signals where needed to in the state and needs substantial investments, but Road improve roadway carrying capacity. Services funding from local property tax, gas tax and grants has declined by one-third since 2009­ , and will • Stem the decline of roadway assets to avoid high continue to fall. replacement costs in the future.

• 10¢ increase in state gas tax 65% would go to the state for highways and ferries, 12% to counties, 18% to cities, 4% to the Transportation Improvement Board and 1% to the County Roads Administration Board.

• $40 councilmanic TBD vehicle fee Increase the vehicle fee that Transportation Benefit Districts can approve from $20 to $40.

• 1.5% MVET renewal fee King County would be authorized to impose this fee, which would be based on vehicle value, through a council vote or a vote of the people. The fee would not apply to new vehicles or to commercial vehicles and trailers. This fee would generate approximately $140 million in 2014. Sixty percent ($85 million) would be allocated to transit. Forty percent ($55 million) would be distributed to cities and the county by population, for the other critical local transportation needs within cities and unincorporated King County. The average car owner would pay $50 to $80 per year more for each vehicle owned. (Based on the DOL average used passenger car value in King County of $6,756, and net impact after eliminating the existing $20 congestion reduction charge and assuming a federal tax deduction and new car purchase every fifth year.)

Examples of needs that might be addressed Preservation of Seattle streets is a pressing need to protect public safety.

Improvements that reduce traffic congestion in regional growth centers like downtown Federal Way will enhance quality of life and our region’s prosperity.

Suburban cities will need to spend millions preserving existing streets­—and current revenues are not keeping pace with these needs.

Substandard County bridges ( ) and road segments ( ), including the Bear Creek and Berrydale bridges, are at risk of failure or closure.

Rainier Ave South carries 50,000 vehicles per day, including 473 bus trips. Improvements are needed to reduce congestion and accidents and to enhance transit and pedestrian travel. Phase 1 is under way; new funding could pay for Phase 2.

West Valley Highway, linking Kent, Auburn, Algona, and Pacific, is at the end of its useful life. It must be closed within a few years if funding is not available to rebuild it. The road’s role as a collector/distributor for Hwy 167 would be lost.

A partnership to seek transportation funding tools. The Sound Cities Association, King County, and the City of Seattle have joined together...

A partnership to seek transportation funding tools. The Sound Cities Association, King County, and the City of Seattle have joined together...