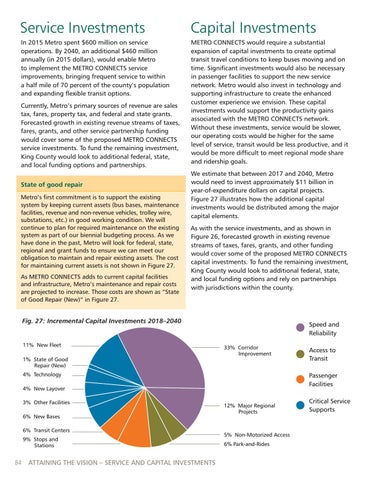 In 2015 Metro spent $600 million on service operations. By 2040, an additional $460 million annually (in 2015 dollars), would enable Metro to implement the METRO CONNECTS service improvements, bringing frequent service to within a half mile of 70 percent of the county’s population and expanding flexible transit options.

METRO CONNECTS would require a substantial expansion of capital investments to create optimal transit travel conditions to keep buses moving and on time. Significant investments would also be necessary in passenger facilities to support the new service network. Metro would also invest in technology and supporting infrastructure to create the enhanced customer experience we envision. These capital investments would support the productivity gains associated with the METRO CONNECTS network. Without these investments, service would be slower, our operating costs would be higher for the same level of service, transit would be less productive, and it would be more difficult to meet regional mode share and ridership goals.

Currently, Metro’s primary sources of revenue are sales tax, fares, property tax, and federal and state grants. Forecasted growth in existing revenue streams of taxes, fares, grants, and other service partnership funding would cover some of the proposed METRO CONNECTS service investments. To fund the remaining investment, King County would look to additional federal, state, and local funding options and partnerships. State of good repair Metro’s first commitment is to support the existing system by keeping current assets (bus bases, maintenance facilities, revenue and non-revenue vehicles, trolley wire, substations, etc.) in good working condition. We will continue to plan for required maintenance on the existing system as part of our biennial budgeting process. As we have done in the past, Metro will look for federal, state, regional and grant funds to ensure we can meet our obligation to maintain and repair existing assets. The cost for maintaining current assets is not shown in Figure 27. As METRO CONNECTS adds to current capital facilities and infrastructure, Metro’s maintenance and repair costs are projected to increase. Those costs are shown as “State of Good Repair (New)“ in Figure 27.

We estimate that between 2017 and 2040, Metro would need to invest approximately $11 billion in year-of-expenditure dollars on capital projects. Figure 27 illustrates how the additional capital investments would be distributed among the major capital elements. As with the service investments, and as shown in Figure 26, forecasted growth in existing revenue streams of taxes, fares, grants, and other funding would cover some of the proposed METRO CONNECTS capital investments. To fund the remaining investment, King County would look to additional federal, state, and local funding options and rely on partnerships with jurisdictions within the county.