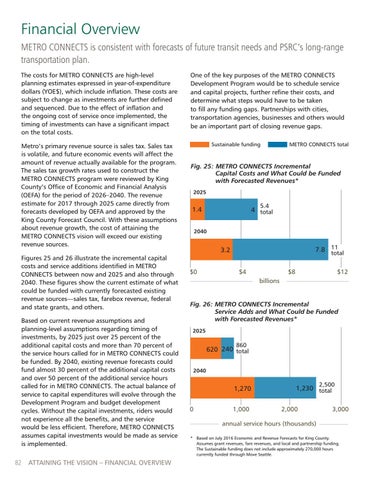 Financial Overview METRO CONNECTS is consistent with forecasts of future transit needs and PSRC’s long-range transportation plan. The costs for METRO CONNECTS are high-level planning estimates expressed in year-of-expenditure dollars (YOE$), which include inflation. These costs are subject to change as investments are further defined and sequenced. Due to the effect of inflation and the ongoing cost of service once implemented, the timing of investments can have a significant impact on the total costs. Metro’s primary revenue source is sales tax. Sales tax is volatile, and future economic events will affect the amount of revenue actually available for the program. The sales tax growth rates used to construct the METRO CONNECTS program were reviewed by King County’s Office of Economic and Financial Analysis (OEFA) for the period of 2026–2040. The revenue estimate for 2017 through 2025 came directly from forecasts developed by OEFA and approved by the King County Forecast Council. With these assumptions about revenue growth, the cost of attaining the METRO CONNECTS vision will exceed our existing revenue sources. Figures 25 and 26 illustrate the incremental capital costs and service additions identified in METRO CONNECTS between now and 2025 and also through 2040. These figures show the current estimate of what could be funded with currently forecasted existing revenue sources—sales tax, farebox revenue, federal and state grants, and others. Based on current revenue assumptions and planning-level assumptions regarding timing of investments, by 2025 just over 25 percent of the additional capital costs and more than 70 percent of the service hours called for in METRO CONNECTS could be funded. By 2040, existing revenue forecasts could fund almost 30 percent of the additional capital costs and over 50 percent of the additional service hours called for in METRO CONNECTS. The actual balance of service to capital expenditures will evolve through the Development Program and budget development cycles. Without the capital investments, riders would not experience all the benefits, and the service would be less efficient. Therefore, METRO CONNECTS assumes capital investments would be made as service is implemented.

One of the key purposes of the METRO CONNECTS Development Program would be to schedule service and capital projects, further refine their costs, and determine what steps would have to be taken to fill any funding gaps. Partnerships with cities, transportation agencies, businesses and others would be an important part of closing revenue gaps. Sustainable funding

Fig. 25: METRO CONNECTS Incremental Capital Costs and What Could be Funded with Forecasted Revenues* 2025

billions Fig. 26: METRO CONNECTS Incremental Service Adds and What Could be Funded with Forecasted Revenues* 2025