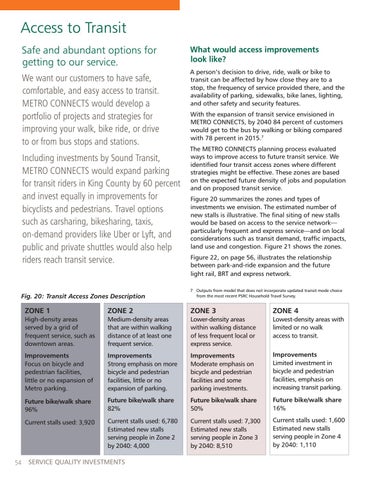 Access to Transit Safe and abundant options for getting to our service. We want our customers to have safe, comfortable, and easy access to transit. METRO CONNECTS would develop a portfolio of projects and strategies for improving your walk, bike ride, or drive to or from bus stops and stations. Including investments by Sound Transit, METRO CONNECTS would expand parking for transit riders in King County by 60 percent and invest equally in improvements for bicyclists and pedestrians. Travel options such as carsharing, bikesharing, taxis, on-demand providers like Uber or Lyft, and public and private shuttles would also help riders reach transit service.

What would access improvements look like? A person’s decision to drive, ride, walk or bike to transit can be affected by how close they are to a stop, the frequency of service provided there, and the availability of parking, sidewalks, bike lanes, lighting, and other safety and security features. With the expansion of transit service envisioned in METRO CONNECTS, by 2040 84 percent of customers would get to the bus by walking or biking compared with 78 percent in 2015.7 The METRO CONNECTS planning process evaluated ways to improve access to future transit service. We identified four transit access zones where different strategies might be effective. These zones are based on the expected future density of jobs and population and on proposed transit service. Figure 20 summarizes the zones and types of investments we envision. The estimated number of new stalls is illustrative. The final siting of new stalls would be based on access to the service network— particularly frequent and express service—and on local considerations such as transit demand, traffic impacts, land use and congestion. Figure 21 shows the zones. Figure 22, on page 56, illustrates the relationship between park-and-ride expansion and the future light rail, BRT and express network. 7 Outputs from model that does not incorporate updated transit mode choice from the most recent PSRC Household Travel Survey.

High-density areas served by a grid of frequent service, such as downtown areas.

Medium-density areas that are within walking distance of at least one frequent service.

Lowest-density areas with limited or no walk access to transit.

Improvements Focus on bicycle and pedestrian facilities, little or no expansion of Metro parking.

Improvements Strong emphasis on more bicycle and pedestrian facilities, little or no expansion of parking.

Improvements Moderate emphasis on bicycle and pedestrian facilities and some parking investments.