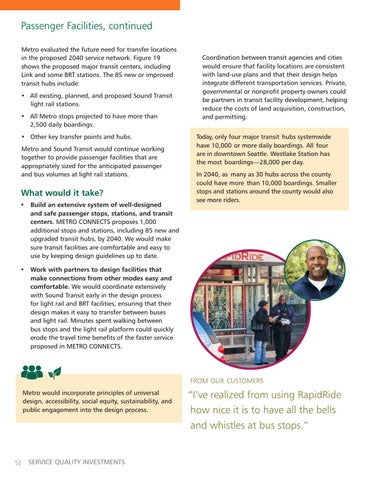 Passenger Facilities, continued Metro evaluated the future need for transfer locations in the proposed 2040 service network. Figure 19 shows the proposed major transit centers, including Link and some BRT stations. The 85 new or improved transit hubs include: • All existing, planned, and proposed Sound Transit light rail stations. • All Metro stops projected to have more than 2,500 daily boardings. • Other key transfer points and hubs. Metro and Sound Transit would continue working together to provide passenger facilities that are appropriately sized for the anticipated passenger and bus volumes at light rail stations.

What would it take? • Build an extensive system of well-designed and safe passenger stops, stations, and transit centers. METRO CONNECTS proposes 1,000 additional stops and stations, including 85 new and upgraded transit hubs, by 2040. We would make sure transit facilities are comfortable and easy to use by keeping design guidelines up to date.

Coordination between transit agencies and cities would ensure that facility locations are consistent with land-use plans and that their design helps integrate different transportation services. Private, governmental or nonprofit property owners could be partners in transit facility development, helping reduce the costs of land acquisition, construction, and permitting. Today, only four major transit hubs systemwide have 10,000 or more daily boardings. All four are in downtown Seattle. Westlake Station has the most boardings—28,000 per day. In 2040, as many as 30 hubs across the county could have more than 10,000 boardings. Smaller stops and stations around the county would also see more riders.

• Work with partners to design facilities that make connections from other modes easy and comfortable. We would coordinate extensively with Sound Transit early in the design process for light rail and BRT facilities, ensuring that their design makes it easy to transfer between buses and light rail. Minutes spent walking between bus stops and the light rail platform could quickly erode the travel time benefits of the faster service proposed in METRO CONNECTS.

from our customers Metro would incorporate principles of universal design, accessibility, social equity, sustainability, and public engagement into the design process.

“I’ve realized from using RapidRide how nice it is to have all the bells and whistles at bus stops.“