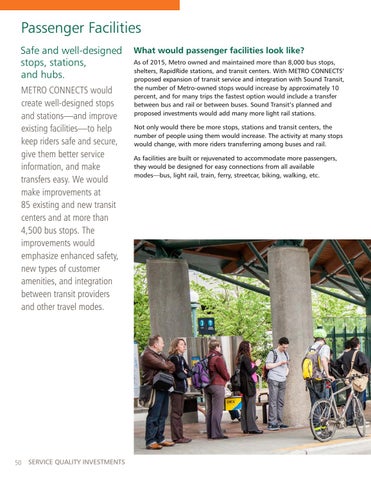 Passenger Facilities Safe and well-designed stops, stations, and hubs. METRO CONNECTS would create well-designed stops and stations—and improve existing facilities—to help keep riders safe and secure, give them better service information, and make transfers easy. We would make improvements at 85 existing and new transit centers and at more than 4,500 bus stops. The improvements would emphasize enhanced safety, new types of customer amenities, and integration between transit providers and other travel modes.

What would passenger facilities look like? As of 2015, Metro owned and maintained more than 8,000 bus stops, shelters, RapidRide stations, and transit centers. With METRO CONNECTS’ proposed expansion of transit service and integration with Sound Transit, the number of Metro-owned stops would increase by approximately 10 percent, and for many trips the fastest option would include a transfer between bus and rail or between buses. Sound Transit’s planned and proposed investments would add many more light rail stations. Not only would there be more stops, stations and transit centers, the number of people using them would increase. The activity at many stops would change, with more riders transferring among buses and rail. As facilities are built or rejuvenated to accommodate more passengers, they would be designed for easy connections from all available modes—bus, light rail, train, ferry, streetcar, biking, walking, etc.