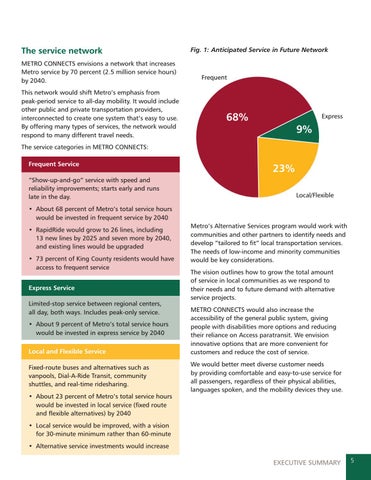 The service network METRO CONNECTS envisions a network that increases Metro service by 70 percent (2.5 million service hours) by 2040. This network would shift Metro’s emphasis from peak-period service to all-day mobility. It would include other public and private transportation providers, interconnected to create one system that’s easy to use. By offering many types of services, the network would respond to many different travel needs.

Metro’s Alternative Services program would work with Frequent Service communities and other partners to identify needs and develop “tailored to fit“ local transportation services. The needs of low-income and minority communities “Show-up-and-go” service would be key considerations.

with speed and reliability The vision outlines how to grow the total amount improvements; starts early and to of service in local communities as we respond their late needs in andthe to future runs day.demand with alternative service projects.

• METRO Invest about 68% Metro’s CONNECTS would alsoof increase the accessibility of the general public system, giving total service hours in frequent people with disabilities more options and reducing service 2040 their reliance by on Access paratransit. We envision are more convenient for • innovative Investoptions in 26that RapidRide lines, customers and reduce the cost of service. including 13 new lines by We would better meet diverse customer needs new lines 2040,service for by 2025, providing7comfortable and by easy-to-use all and passengers, regardless existing of their physical abilities, upgrading lines

languages spoken, and the mobility devices they use.

• 73% of King County residents will have access to frequent service