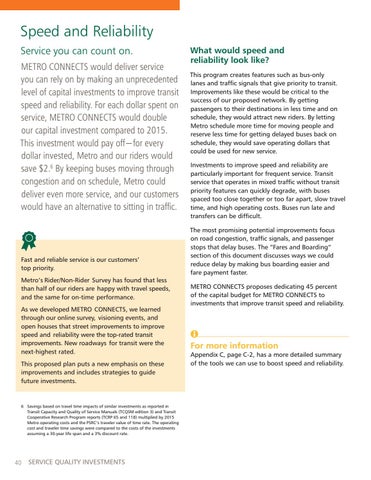 Speed and Reliability Service you can count on. METRO CONNECTS would deliver service you can rely on by making an unprecedented level of capital investments to improve transit speed and reliability. For each dollar spent on service, METRO CONNECTS would double our capital investment compared to 2015. This investment would pay off−for every dollar invested, Metro and our riders would save $2.6 By keeping buses moving through congestion and on schedule, Metro could deliver even more service, and our customers would have an alternative to sitting in traffic.

Fast and reliable service is our customers’ top priority. Metro’s Rider/Non-Rider Survey has found that less than half of our riders are happy with travel speeds, and the same for on-time performance. As we developed METRO CONNECTS, we learned through our online survey, visioning events, and open houses that street improvements to improve speed and reliability were the top-rated transit improvements. New roadways for transit were the next-highest rated. This proposed plan puts a new emphasis on these improvements and includes strategies to guide future investments.

6 Savings based on travel time impacts of similar investments as reported in Transit Capacity and Quality of Service Manuals (TCQSM edition 3) and Transit Cooperative Research Program reports (TCRP 65 and 118) multiplied by 2015 Metro operating costs and the PSRC’s traveler value of time rate. The operating cost and traveler time savings were compared to the costs of the investments assuming a 30-year life span and a 3% discount rate.

What would speed and reliability look like? This program creates features such as bus-only lanes and traffic signals that give priority to transit. Improvements like these would be critical to the success of our proposed network. By getting passengers to their destinations in less time and on schedule, they would attract new riders. By letting Metro schedule more time for moving people and reserve less time for getting delayed buses back on schedule, they would save operating dollars that could be used for new service. Investments to improve speed and reliability are particularly important for frequent service. Transit service that operates in mixed traffic without transit priority features can quickly degrade, with buses spaced too close together or too far apart, slow travel time, and high operating costs. Buses run late and transfers can be difficult. The most promising potential improvements focus on road congestion, traffic signals, and passenger stops that delay buses. The “Fares and Boarding“ section of this document discusses ways we could reduce delay by making bus boarding easier and fare payment faster. METRO CONNECTS proposes dedicating 45 percent of the capital budget for METRO CONNECTS to investments that improve transit speed and reliability.

For more information Appendix C, page C-2, has a more detailed summary of the tools we can use to boost speed and reliability.